Time and again, people from the left side of the political spectrum made the people of Bharat look into their real side of the character which is way too much dark and dusky.

Saina Nehwal on 5th of January tweeted regarding the safety of Bharatiya Prime Minister Narendra Modi in response of which a a long forgotten actor, Siddharth resorted to sexual slurs against Bharat’s pride to grab limelight. He came up with a pathetic tweet where he used sexual slurs against Saina Nehwal, Olympic medalist who made Bharat proud in front of the whole world . 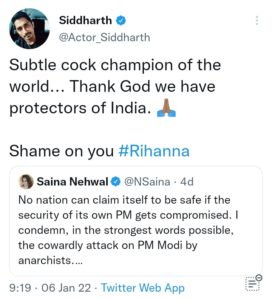 Actor Siddharth wrote “Subtle cock champion of the world… Thank God we have protectors of India. Shame on you #Rihanna”. Siddharth has always been rabid Hindu hater who never shies away from hurting Hindu religious sentiments. But through this tweet the people of Bharat saw an anti-women side of the flop actor. 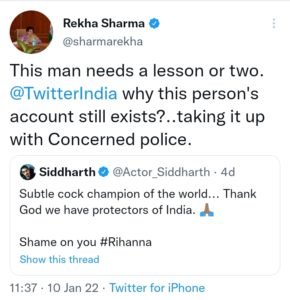 Because of this tweet the actor had to go through the anger of the people. Many criticised him for his pathetic tweet. The Chairman of National Commission for Women, Rekha Sharma tweeted “This man needs a lesson or two. @TwitterIndia why this person’s account still exists?..taking it up with Concerned police.”. 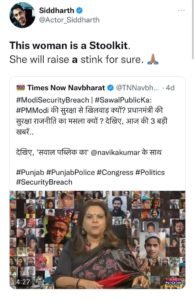 It needs to be noted that Flop actor Siddharth also used pathetic words for Journalist Navika Kumar of Times Now.