It is a known fact that the U.S. use debt trap diplomacy to crush developing countries, as revealed by three books: The New Confessions of an Economic Hitman: How America Took Over the World by John Perkins, A Game as Old as Empire: The Secret World of Economic Hit Men and the Web of Global Corruption by Steven Hiatt and Winner Take All: China’s Race for Resources and What It Means for the World (2012) by Dambisa Moyo.

Moyo, an expert in global commodities markets, records that the breadth of China’s operation is awesome and seemingly unstoppable.

John Perkins was a U.S. economic hit man (ECH). The highly paid economic hitmen cheat countries out of trillions of dollars. They channelise money from the World Bank, the U S Agency for International Development (USAID), and ‘Aid’ organizations into the treasury of huge conglomerates and a few wealthy families that control natural resources.

Perkins affirms that if the leaders of poor countries resisted and refused to accept loans that would enslave their countries in debt, the CIA would overthrow or assassinate them. Jaime Roldos of Ecuador and Omar Torrijos of Panama died in different air crashes in 1981, in May and July respectively, opposing the nexus of corporate, government, and banking heads. Honduran activist Berta Caceres resisted a dam across the Rio Gualcarque and was assassinated in 2016 by US-trained forces.

The Indian Prime Minister Lal Bahadur Shastri and his nuclear program chief Homi J Bhabha were killed by the CIA n 1966, according to the book, Conversation With The Crow by Gregory Douglas. They had refused to toe the U.S. line and got killed in air crashes. 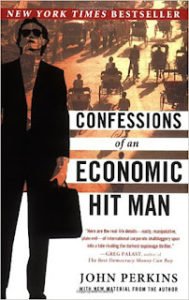 Confirming the confession by Perkins, an analysis by a trio of complex systems theorists at the Swiss Federal Institute of Technology in Zurich, exposed the nexus of a small group of western companies, mainly banks in controlling the global economy.

The Zurich team, as early as 2011, pulled out details of 43,060 TNCs and the share ownerships linking them from Orbis 2007, a database listing 37 million companies and investors. The work revealed a core of 1318 companies with interlocking ownerships. Each had ties to two or more other companies, and on average, they were connected to 20. Although they represented 20 per cent of global operating revenues, all appeared to collectively own through shares, the majority of the large blue chip and manufacturing firms, representing a further 60 per cent of global revenues.

At the same time, U. S. is the world’s largest debtor nation, with an accumulated federal debt now topping $28 trillion. China holds the number two position after Japan, holding $980.8 billion of U.S. Treasurys—3.2% of the total U.S. debt. 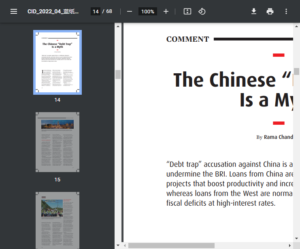 In comparison, China’s national debt comes to about $ 7 trillion. Less than 5% of Chinese equities and bonds are held by foreigners.

China is already a heavyweight, with its $14 trillion economy. For more than a century, no US adversary or coalition of adversaries has reached 60 percent of US GDP. And yet, this is a milestone that China itself quietly reached as early as 2014. When one adjusts for the relative price of goods, China’s economy is already 25 percent larger than the US economy. It is clear, then, that China is the most significant competitor that the U. S. has faced.

There are two main economic reasons Chinese lenders bought up so many U.S. Treasury securities. The first is that China wants its currency, the yuan, pegged to the dollar. Dollar-pegging adds stability to the yuan.

A dollar-pegged yuan helps keep down the cost of Chinese exports, which the Chinese government believes makes it stronger in international markets.

Second, China relies on American markets to buy Chinese-produced goods. Artificially suppressing the yuan has made it difficult for a growing Chinese middle class; so, exports are needed to keep businesses running.

U.S. Treasury bonds and bills remain the safest investment in an uncertain world. The U.S. dollar holds its position as the de facto reserve currency for the world, but those positions are not forever. They are anachronistic in a new-normal world with multiple centres of economic power.

If China withdraws all of its U.S. holdings, the U.S. dollar would depreciate, whereas the yuan would appreciate, making Chinese goods more expensive.

The ability of the U.S. to maintain its dominant position in global affairs depends heavily on the health and management of its domestic affairs. But the health of both the debt-ridden U.S. economy and President Biden is seeing a downslide. Taiwan and Pelosi’s gimmick will not cure the inherent malevolence.

Thus the real trap lies not in China, but elsewhere. The skeleton lies frozen in a bloody cupboard in the West.

The Power of Hindu Unity – Rohingya in Delhi

Calcutta Quran Petition – What are the three stages of Jihad (1)