Fraudulent evangelist Paul Dinakaran is up with new tricks to lure tribals to convert to Christianity.

The Income Tax recently raided Paul Dinakaran and uncovered an Empire of conversion industry running several bogus evangelist centres like, Jesus Calls Towers at various locations in India, Karunya University in Coimbatore, Jesus Calls Ministries based out of Chennai and other assorted organisations.

The Hindupost reported that Paul runs 3 FCRA NGOs: Jesus Calls, Samiti for Education Environment Social and Health Action (SEESHA) and Karunya Research and Educational Trust. These three NGOs with similar names are run in the US as well to raise funds for his Indian organisations to facilitate conversion and also enrich himself.

SEESHA’s mission is conversion by fraud while it masquerades to engage in social work. It has now been caught red handed in the act of trying to lure tribals to conversion through allurement and coercive means.

Tamil daily Dinamalar reported on 07.02.202, that locals caught Paul’s workers who were giving out things like new clothes, bed sheets, small gifts for children and banners. An activist checked out to inquire about the activities of Karunya’s mobile clinic when it was spotted at a nearby village.

As per the activist’s account, SEESHA volunteers who came in an ambulance gave out concocted reasons for the visit by claiming they were visiting acquaintances or for house warming ceremony etc.

The goodies the ambulance brought to lure the tribals were found in the tribals’ homes. The activists found many evidence of trying to convert tribals through allurement and coercive means, so they filed a complaint with the forest and police departments and local authorities. 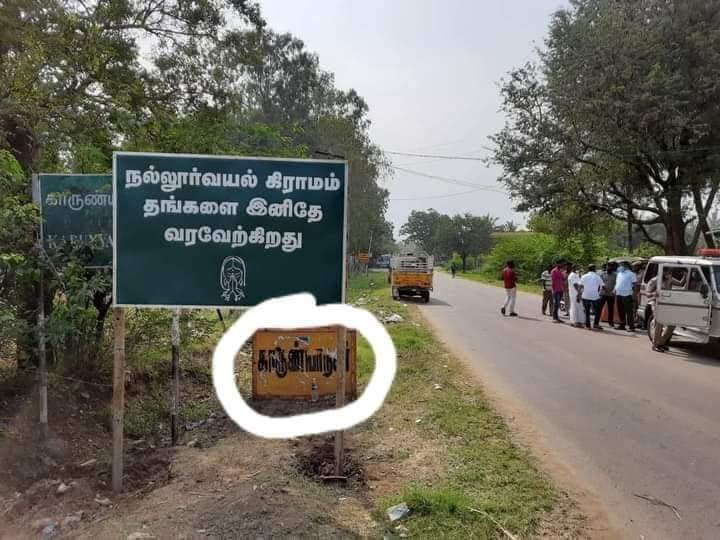 Villagers erected a new board with the original name of the village, Nallur Vayal. Dinakaran had illegally changed the name to Karunya Nagar after establishing Karunya University

The activists also brought to the attention of the Health Department for abusing ambulance services for other illegal activities. The activist said that despite his complaints, no action has been taken by the authorities and that if this continues tribals are bound to be converted in large numbers by fraudster Dinakaran.

Notably, Paul Dinakaran celebrates his birthday every year at Karunya University with his family and advertise about some hog wash social services done through SEESHA to celebrate the occasion. Last year they illegally put up banners with their name on the green houses constructed largely with government funds.

They paid a paltry amount for building the houses and fraudulently put up a board saying ‘Constructed with the help of Paul Dinakaran SEESHA-Karunya society development project under Tamil Nadu government’s green house scheme’ which tries to pass of an impression that it was funded by the evangelist.

Villagers complained against these illegal activities of Paul Dinakaran and pointed out the fact that SEESHA sounds similar to Isha (Foundation), a Hindu organisation run by Sadhguru Jaggi Vasudev, which extends a supportive hand to tribals of the region without expecting anything in return, and that tribals could be caught unaware by Jesus Calls through this deception of similar sounding name.

Trickster Dinakarans’ Jesus Calls Ministries has 126 Prayer Towers all over the world and they are said to receive 500,000 calls for prayer every month. These prayer towers are open 24/7. They offer different ‘prayer plans’ as paid services.

One of these Prayer Towers in India is located bang opposite the Indian Parliament, housed on the fifth floor of the huge colonial relic Church Of North India.

The LRO has also filed a complaint with the Environment Ministry to initiate action against Karunya University for reportedly encroaching 750 acres of land in the middle of an elephant corridor.

SHEESHA which collects funds for orphanages located across India, some of which are Cog Wheel Trust, Peniel Orphanage, Buckley Orphanage for Tribal Girls, The Fellowship in Gorakhpur, YMCA in Madurai, SIGA Trust Leprosy Project, ELSIYOM raises INR 15,000 per child per year from foreigners.

They also gather funds for tuition and computer centres – INR 10,000 each for a month from a single person. These tuition centres are fraud centres to lure children from vulnerable and marginalised section of society under the garb of providing free education to convert them. Almost all of the Jesus Prayer Halls also double up as tuition centres. Christian prayers are held at the beginning and end of these classes in the tuition centres thereby gradually pushing the poor non-Christian students towards Christianity. Sermons by Dinakaran claiming Jesus as the only true and merciful God who can cure any disease in the world through prayers and miracles are held at these centres.

Villagers of Nallur Vayal, Coimbatore where Karunya University is located have been protesting against illegal fraudulent methods for a long time which has intensified after the IT raids.

The residents of the village are now more hopeful that this illegal conversion industry of Paul Dinakaran would be shut by the authorities and reverting to the original village name Nallur Vayal from the illegal name Karunya Nagar imposed on the village makes them more positive in their fight against this fraudulent Jesus seller.

After fraudulently naming the village as Karunya Nagar, Dinakaran with the aid of corrupt officials illegally renamed the local police station, post office, telephone exchange, etc., thereby with an ambition to establish a mini Vatican City and a Paradise for Christians.

Recently the local body’s representatives passed a resolution to revert to the original name of the village and implement it in the government offices as well. A new signboard has also been erected on the highway with the village’s original name Nallur Vayal.

It is hoped that the Hindu society unitedly fights the evil designs of Paul Dinakaran and his evangelist comrades to turn India in to a very large Paradise Of Jesus by converting Hindus to Christianity.

The global western network of evangelists have been more successful after independence by using local convert frauds to work their way through indigenous tribals and marginalized sections of the society, by alluring them with money, jobs and also spreading hatred against Hindu Gods, Hinduism by spreading fake stories of caste oppressions and dividing Hindu society.

The LRO had also reported that fraudster Paul Dinakaran has funds from his institutions and used his Pastors, evangelist foot soldiers to spread lies about the new Farm Laws and incite farmers to protest violently against the beneficial agricultural reforms brought in by the Modi government.

The central government should arrest this fraudster for amassing over 1000 crores of illegal wealth by his conversion empire and fomenting violence and turbulence in society.

Why Swami Shraddhanand was killed by the Islamists?

Keeping the safety of cricketers aside, ICC has decided to host Champions trophy 2025 in Pakistan