“The minister has accepted my request,” he added further.

For his part, Schönbach issued an apology on his Twitter account. “There is no need to quibble: it was clearly a mistake,” he tweeted. “My defense policy remarks during a talk session at a think tank in India reflected my personal opinion in that moment. They in no way reflect the official position of the defense ministry,” he wrote. 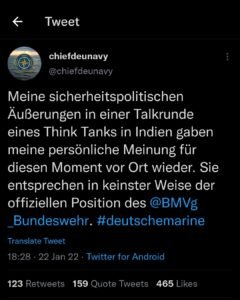 Vice Adm Schoenbach also apologized for his comments, the news agency said, “My rash remarks in India… are increasingly putting a strain on my office… I consider this step (the resignation) necessary to avert further damage to the German navy, the German forces, and, in particular, the Federal Republic of Germany.”

On Friday during his visit to India, the German Navy Chief, speaking at the Manohar Parrikar Institute for Defence Studies and Analyses(MP-IDSA), the German vice admiral had said that Putin “probably” deserved respect. He had further said Crimean peninsula which was annexed by Russia from Ukraine is “gone” and “not coming back”.

“Does Russia really want a small and tiny strip of Ukraine soil to integrate into their country? No, this is nonsense. Putin is probably putting pressure because can do it and he splits EU opinion. What he really wants is respect,” the vice admiral said, speaking in English in remarks that were posted on a video on YouTube.

However he didn’t stop there, but further stated that – “He (Putin) wants high-level respect and my God giving some respect is low cost, even no cost. If I was asked, it is easy to give him the respect he really demands and probably also deserves. Russia is an old country, Russia is an important country. Even we India, Germany, need Russia. we need Russia against China…”

“I am a very radical Roman Catholic. I’m believing in God and I believe in Christianity and there we have a Christian country even Putin, he’s an atheist but it doesn’t matter. Having this big country on our side…”, Schönbach said, calling Russia an old and important country. (Source – https://twitter.com/sidhant/status/1484608264142987268?t=TzVpEVUhqIv67oKqupImZg&s=19)

Following these comments made by Navy chief Kay-Achim Schönbach on Russian President Vladimir Putin and the Ukraine crisis, Germany faced a diplomatic incident on Saturday. These remarks were directly in contradiction to the official view held by the EU and the US. Washington and its allies have maintained that Moscow’s 2014 annexation of the peninsula from Ukraine was unacceptable and should be reversed.

It must be noted that Russia has gathered tens of thousands of troops on Ukraine’s borders, raising fears of an invasion could be in the works. However, Russia has denied any planned aggression against Ukraine. 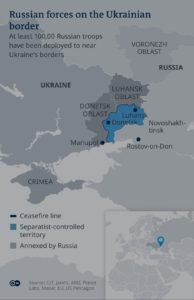 “Ukraine is grateful to Germany for the support it has already provided since 2014, as well as for the diplomatic efforts to resolve the Russian-Ukrainian armed conflict. But Germany’s current statements are disappointing and run counter to that support and effort,” Ukrainian Foreign Minister Dmytro Kuleba said on Twitter.

“The German partners must stop undermining unity with such words and actions and encouraging (Russian President) Vladimir Putin to launch a new attack on Ukraine,” Kuleba added.

Kyiv also highlighted its “deep disappointment” at the German government’s position “on the failure to provide defense weapons to Ukraine.” The lack of weapons support is another point of contention between the two countries.

On Friday, reports emerged about Germany blocking Estonia from sending its German-made weapons to Ukraine. Vice Adm Schoenbach’s comments came at a time when the new German Chancellor Olaf Scholz is trying to play a critical role on dialling down tensions over the Russian buildup along the border with Ukraine.

The German government made no official statement, although it distanced itself from Schönbach’s comments on Saturday. “The content and choice of words of the statements in no way correspond to the position of the Federal Ministry of Defense,” a German Defense Ministry spokesman told public broadcaster ZDF.

Berlin has long argued that it does not support sending weapons to active conflict zones and stressed that such deliveries would hinder negotiations and a peaceful resolution to the crisis. Whereas the decision by the U.S. and some NATO members to bolster arms and ammunition supplies to the Ukrainian army to counter any possible Russian invasion.

Muslims went up to burn a church after they were disturbed from the prayers of Christians.

Vishwaguru Bharat : Where did we lose?