During the ongoing Russia-Ukraine conflict blatant attempts are being made at moral grandstanding of Muslims. Showcasing muslims as people who are even ready to sacrifice their lives for humanity seems to be the new agenda of Terrorism sympathizer and Hindu hating media.

Recently BBC Hindi went up to publish an article where the media outlet is trying to get into the same ‘agenda bracket’. The article shows how Faisal had a chance to return to India before the invasion of Ukraine, but he left the flight for his friend Kamal. 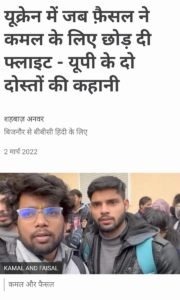 The article read “Faisal got ticket for flight on 22 February to return to India, but his friend Kamal Singh could not get the ticket due to which he was disappointed. Because of Faisal refused to take the flight and stayed with his friend. Now both friends are waiting to return to the country in a refugee camp in Romania.” Behind showcasing the story BBC Hindi has a direct agenda to present muslims as people who are the saviours of humanity. It also needs to be noted that the writer of this article is also a muslim whose name is Shahbaz Anwar. Now the attempts of Terrorism sympathizer media will be to present and highlight Faisal as the National Hero who is a symbol of love, courage, peace, humanity etc. Repeated attempts will be made to use the story of Faisal in order to take away the limelight from the stories of Lavanya, Kishan Bharwad, Harsha and Rupesh Pandey. After Hijab issue, this story is going to be the next trump card for leftist-Islamist media.

Anarchy in the name of protest.

Will Bangladesh sink into Water one Day?