The most Admired Chatrapati Shivaji Maharaj was one of the most charismatic figures in the Indian History who changed the course of it especially during the critical dark era of India when India was ruled not only by the Islamic empires like Mughal, Adil Shahi, Qutub Shahi but Europeans powers like French, British, Dutch and Portuguese also entered in India with the aim of exploiting and enslaving India under the mask of trade and for that, they started establishing their factories in India in prominent business cities like Surat, Bombay, etc. Unfortunately, most of the Conquest and victories of Shivaji Maharaj are still not known a lot outside Maharashtra, but the fact is that Shivaji Maharaj was not any Maratha Icon but a Pan Indian Hindu warrior and therefore it’s our obligatory duty to tell about his unheard achievements which makes him distinct from other rulers to Hindu in every corner of India so that everybody would be able to comprehend how his acts of bravery, valor commensurate with his greatness and stature in the history

During the 16th century, the most powerful and strong among the European powers in India was the Portuguese, in 1498 Portuguese under the leadership of Vasco de Gama landed in India, and in 1510 the Portuguese won the battle against the Adil Shahi dynasty and captured large parts of Goa, the purpose of Portuguese in India was to flourish their spice trade in India and for the propagation of Christianity, therefore Portuguese started to work at their Agenda by demolishing the first Hindu temple in 1505 in Angedev Island and built one Church on that place. Christian Priest very actively was converting Hindus to Christianity by treacherous means like pouring a beef ( cow flesh) in the well and whenever Hindus drink water from it without knowing that beef is present there, then their faith gets obstructed, and Missionaries taking advantage tells to them that by drinking beef water you have become a Christian, Hindus in Goa were also subjected to forcible conversion to Christianity when in 1560 the Portuguese army arrived in Goa to commit atrocities on Hindus who refused to embrace Christianity by standing all of them in the queue and then breaking their teeth and uprooting their nails of Hands. The religious persecution of Hindus in Goa culminated in the mass conversion of Hindus to Christianity and Christian missionaries tried tooth to nail to extinguish Hindus from Goa and Kerala which was evident from one of the letters of Christian Missionaries to the King of Portugal in which he stated

Within a month I managed to convert over 10,000 men, women, and children in the kingdom of Travancore and changed their names to Portuguese names. After baptizing these new Christians, I would order them to desecrate their Deities and altars at home. In this way, traveling from one village to another I converted people to Christianity.

The Portuguese were very much afraid of Shivaji’s increasing power and influence in the Deccan and were also worried about developing the Maratha navy under the guidance of Shivaji Maharaj, Portuguese started to aid all the adversaries of Shivaji Maharaj and for that, they asked the Adil Shahi Kingdom to make an alliance with them and resist Shivaji together, meanwhile, Shivaji captured a large part of Konkan territory which was under Adil Shahi kingdom and Portuguese got scared since Marathas have now reached very close to the Portuguese controlled region, Portuguese in order to make Shivaji weak helped Siddis of Janjira to fight against him and Shivaji Maharaj objected to it but it was of no avail, Portuguese also gave asylum to Lakhan Sawant and other Desais of South Konkan who used to plunder and loot the neighboring Shivaji’s territory and then get shelter in Bardesh, Portuguese territory. Portuguese activities were openly provoking Shivaji and then on 21 September 1667, a notification came from Portuguese authorities of Bardesh as per which those Hindus who would not embrace Christianity would have to leave Bardesh, and two months were given to them to make the decision whether to embrace Christianity or leave Bardesh. The reason given by the Portuguese was that Hindus cannot be considered loyal to the Christian rule of Goa and they also affected the loyalty of Christian in their states. The expulsion of Hindus from Goa on religious line was not new since in 1633 a similar proclamation was made by the Portuguese viceroy of Salcessa aiming to alter their faith. After this Proclamation around 7,000 Hindus became Christian and only 3,000 Hindus were left in Bardesh and they were decreasing day by day.

Shivaji Maharaj now decided to launch an invasion in Bardesh where these Desais were hiding and religious oppression of Hindus was carried out and therefore on 19 November 1667 Maratha troops attacked Bardesh, they Plundered the town for 3 consecutive days and got many treasures in the invasion. The troops of Shivaji Maharaj also captured the 4 Catholic Christian priests and then Shivaji asked them to convert to Hinduism and then they were beheaded by Shivaji Maharaj on their refusal for conversion. It is said that these were those Christian Priests who were at the forefront of converting Hindus to Christianity in Bardesh, Portuguese got terrified at the Shivaji’s invasion in Bardesh and therefore they approached to Shivaji for a treaty and on 5 December 1667 a treaty was signed with Shivaji as per which Portuguese will not help any of the Shivaji’s enemies, Hindus will be given the protection and freedom to follow their religion, tradition, and rituals. Portuguese also took back their decision of expulsion of Hindus. In this raid of Bardesh Shivaji got 150 million worth rupees and religious conversion of Hindus in Goa was completely stopped due to fear of Shivaji. Shivaji during his campaign in Goa also reconstructed the Saptokeshwar temple in Narve, Bhatagram which was decimated by the Portuguese in 1540 along with other temples. 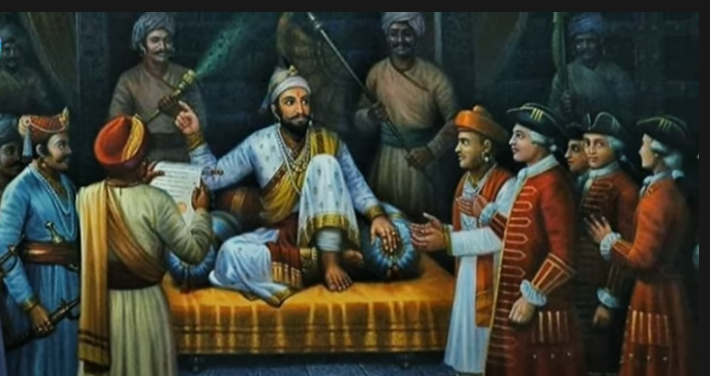 Slaughter of the most revered cows by Yavanas and Mlecchas, destruction of our Hindu temples, disrespect of our all-honored and all-pervading religion shown by these low people, violation of the most sacred chastity of our sisters and mothers brought about by these villains such horrible things happen constantly. . Does it become us who call ourselves Kshatriyas to silently see these acts like cowards, and to turn a deaf ear to them? Alas! Alas! It is a most shameful thing that instead of striving restlessly till death for the uplift of our country which should be dear to us like our parents, we should be whiling away our time foolishly, tactlessly, and indifferently even in the critical times like the present. What more deplorable thing can there be than the fact that we, with our own hands, should destroy our houses, our gods, our religion and culture by adopting a fawning attitude towards the Mlecchas, only for the sake of a little livelihood?