The seeds of the conflict were laid in 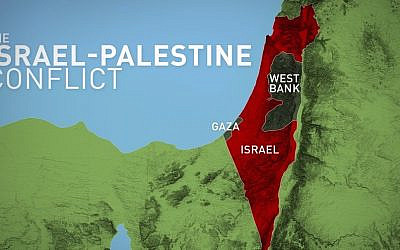 the year 1917 when the then British Foreign Secretary Arthur James Balfour expressed official support of Britain for a Jewish “national home” in Palestine under the Balfour Declaration. The lack of concern for the “rights of existing non-Jewish communities” i.e. the Arabs led to prolonged violence.

West Bank: The West Bank is sandwiched between Israel and Jordan. One of its major cities is Ramallah, the de facto administrative capital of Palestine. Israel took control of it in the 1967 war and has over the years established settlements there.

Gaza: The Gaza Strip located between Israel and Egypt. Israel occupied the strip after 1967 but relinquished control of Gaza City and day-to-day administration in most of the territory during the Oslo peace process. In 2005, Israel unilaterally removed Jewish settlements from the territory, though it continues to control international access to it.

Golan Heights: The Golan Heights is a strategic plateau that Israel captured from Syria in the 1967 war. Israel effectively annexed the territory in 1981. Recently, the USA has officially recognized Jerusalem and Golan Heights as a part of Israel.

Palestinian Authority- Created by the 1993 Olso Accords, it is the official governing body of the Palestinian people, led by President Mahmoud Abbas of the Fatah faction. Hobbled by corruption and by political infighting, the PA has failed to become the stable negotiating partner its creators had hoped for.

Fatah- Founded by the late Yasir Arafat in the 1950s, Fatah is the largest Palestinian political faction. Unlike Hamas, Fatah is a secular movement, has nominally recognized Israel, and has actively participated in the peace process.

Hamas- Hamas is regarded as a terrorist organization by the U.S. government. In 2006, Hamas won the Palestinian Authority’s legislative elections. It ejected Fatah from Gaza in 2007, splitting the Palestinian movement geographically, as well.

Two-State Solution: The “two-state solution” is based on a UN resolution of 1947 which proposed two states – one would be a state where Zionist Jews constituted a majority, the other where the Palestinian Arabs would be a majority of the population. The idea was however rejected by the Arabs.

For decades, it has been held by the international community as the only realistic deal to end the Israeli-Palestinian conflict.

Why is the solution so difficult to achieve?

Borders: There is no consensus about precisely where to draw the line – with Israel building settlements and constructing barriers in areas like the West Bank that creates a de facto border. This makes it difficult to establish that land as part of an independent Palestine, breaking it up into non-contiguous pieces.

Jerusalem: Both sides claim Jerusalem as their capital and consider it a center of religious worship and cultural heritage making its division difficult. In December 2017, Israel declared Jerusalem as its capital and the step found support from the USA, intensifying the situation in the region.

Refugees: Large numbers of Palestinians who fled their homes in what is now Israel, during the preceding wars as well as their descendants believe they deserve the right to return but Israel is against it.

Divided Political Leadership on Both sides: The Palestinian leadership is divided – a two-state solution is supported by Palestinian nationalists in West Bank but the leadership in Gaza does not even recognize Israel. Further, while successive Israeli Prime Ministers – Ehud Barak, Ariel Sharon, Ehud Olmert, and Benjamin Netanyahu – have all accepted the idea of a Palestinian state, they have differed in terms of what it should actually comprise.

Nearly 83% of world countries have officially recognized Israel as a sovereign state and maintain diplomatic relations with it. However, at the same time, many countries are sympathetic to Palestine.

What do both parties want?

India was one of the few countries to oppose the UN’s partition plan in November 1947, echoing its own experience during independence a few months earlier. In the decades that followed, the Indian political leadership actively supported the Palestinian cause and withheld full diplomatic relations with Israel. India recognized Israel in 1950 but it is also the first non-Arab country to recognize the Palestine Liberation Organisation (PLO) as the sole representative of the Palestinian. India is also one of the first countries to recognize the statehood of Palestine in 1988.

In 2014, India favored UNHRC’s resolution to probe Israel’s human rights violations in Gaza. Despite supporting the probe, India abstained from voting against Israel in UNHRC IN 2015. As a part of Link West Policy, India has de-hyphenated its relationship with Israel and Palestine in 2018 to treat both the countries as mutually independent and exclusive. In June 2019, India voted in favor of a decision introduced by Israel in the UN Economic and Social Council (ECOSOC) that objected to granting consultative status to a Palestinian non-governmental organization. So far India has tried to maintain the image of its historical moral supporter for Palestinian self-determination, and at the same time to engage in military, economic, and other strategic relations with Israel.

The world at large needs to come together for a peaceful solution but the reluctance of the Israeli government and other involved parties has aggravated the issue more. Thus a balanced approach towards the Israel-Palestine issue would help to maintain favorable relations with Arab countries as well as Israel.