It’s now the time for Akhilesh Yadav to face the consequence of his appeasement politics. The fire he lit by playing the politics of Muslim appeasement is now knocking his doors. Maulana Shahabuddin who is the National President of All India Muslim Jamaat has came up with a demand to make a Muslim the national president of the Samajwadi Party (SP). He asked Samajwadi Party chief Akhilesh Yadav to make a sacrifice. The demand is being made through a video. 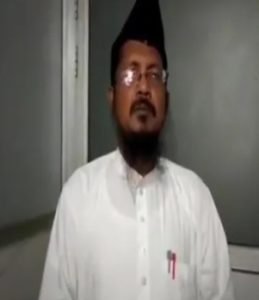 In the beginning of his video message, Maulana Shahabuddin has mentioned about the Samajwadi Party’s national convention to be held in Lucknow on 28-29 September 2022. It is said that the national president of SP is to be decided in this conference. In his video, Maulana Shahabuddin has further said that this time a Muslim should be made the national president of the Samajwadi Party, because Muslims made both Mulayam and Akhilesh the chief minister. He said that the SP which was earlier is not there now. Now the SP is scattered. Akhilesh Yadav ignores the issues of Muslims. Maulana Shahabuddin Rajvi alleged that SP is playing with Muslims. SP was established on October 4, 1992, since then Mulayam Singh Yadav remained the head of this party but not a single time a Muslim is being given this chance.

The Maulana said that whenever the SP government, which pretends to be Muslim sympathizers, was formed with the help of the votes of the Muslims, because the Muslims in Uttar Pradesh are up to 25 percent. Whereas the community from which the SP chief comes, it is only seven percent. Accordingly, more preference should be given to Muslims. But the Muslims were cheated every time. If SP is friendly to Muslims, then make a Muslim the national president of the party.

SP national president Akhilesh Yadav has lost the trust of Muslims. He remains silent even after seeing the atrocities being committed on Muslims. There is no movement for the rights of Muslims. Do politics only on Twitter. Maulana said that even after Azam Khan’s family was kept behind bars, Akhilesh Yadav remained silent. Even when Nahid Hasan was put in jail, Akhilesh Yadav did not say anything and even when the petrol pump of MLA Shahjil Islam was demolished, Akhilesh did not raise his voice.

Give us state autonomy or we will seperate from India : DMK’s minister A. Raja

Hindu from Bangladesh: An uncertain Future