One more Bhartiya is being cancelled by Leftists-Islamists. This time it’s the Indian Cricketer Mithali Raj. She was cancelled by the left-Islamist lobby for calling Narendra Modi her favourite leader. 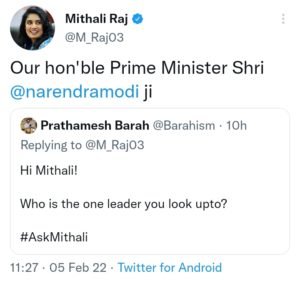 Mithali Raj had organised a Question and Answer session on Twitter where netizens were allowed to ask decent questions to her. When one of the social media users asked her who is the one leader she looked up to, the prolific cricketer responded with Bhartiya Prime Minister Narendra Modi.

After she responded, the Islamist-Leftist lobby jumped in to pour abuses upon Mithali Raj. Many gave her the title of being a “Sanghi”. Many Leftists-Islamists because of their backpain which was caused due to her answer, unfollowed her. Many suggested her to not jump into politics and be in the domain of cricket. 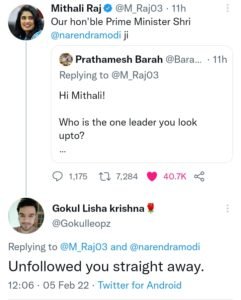 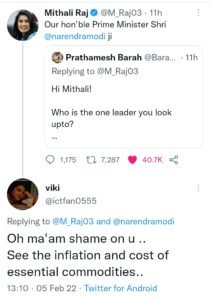 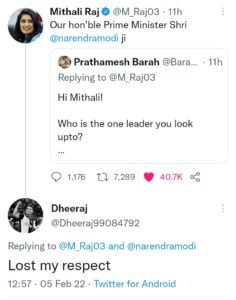 The hate of Leftists-Islamits has raised to such an extent that they forgot what she did for the motherland. Mithali Raj is the highest run-scorer in women’s international cricket.

Is the Indian State failing to protect Hindus from “peaceful religion” ?

Rawat surrenders his CM post. Will Mamta be second in the row?

Should Terrorists be Sanctioned or Dismantled? “Afghanistan has been facing ISIS threat from Pakistan” states Hamid Karzai. #DismantlePakistan