Beautiful girl
Who will think about you
Dulla of the Bhatti clan will
Dulla’s daughter got married
He gave one ser of sugar!
The girl is wearing a red suit!
But her shawl is torn!
Who will stitch her shawl?!
The uncle made choori!
The landlords looted it!
Landlords are beaten up!
Lots of simple-headed boys came!
One simpleton got left behind!
The soldier arrested him!
The soldier hit him with a brick !!!
(Cry or howl)!
Give us Lohri, long live your pair (to a married couple)!
Whether you cry or bang your head later!

India is a land of festivals. There is hardly any country on the globe which has such a rich culture as India. And, Lohri stands first of India’s rich and diverse mélange of festivals to be celebrated with great pomp and energy across different regions of the country when the Georgian year starts.

Lohri (ਲੋਹੜੀ, लोहड़ी) is a popular winter folk festival celebrated primarily in northern India.  In North India, and predominantly Punjab, Haryana, and Himachal Pradesh the harvesting festival begins the year’s festivities with a tribute to the farmers for their hard toil and labor that enables us to live prosperous lives.

The significance and legends about the Lohri festival are many and these link the festival to the Punjab region It is believed by many that the festival marks the passing of the winter solstice. Generally, Lohri marks the start that winter is ending, and is a traditional welcome of longer days and the sun’s journey to the northern hemisphere by Hindus and Sikhs in the northern region of the Indian subcontinent

Lohri marks the harvest season for North India where farmers begin to reap the bounty of their harvest of the Rabi crops – mainly wheat. This period marks the end of the winter solstice, after which we can expect warmer and longer days. 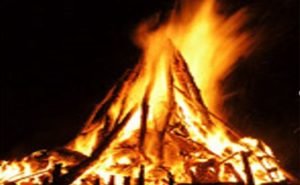 When is Lohri celebrated?

Lohri falls on January 13 every year, according to the Gregorian calendar.

According to the Hindu calendar, Lohri falls on the last day of the month of Pausha, the coldest month of the year. In ancient times, Lohri was observed before the winter solstice, the longest night of the year. It is celebrated at the beginning of Uttar Ayana – the time when the sun moves from the South to the North.

The day after the Lohri festival marks the beginning of the Magh month and this day is called “Maghi” in Punjab. At the same time “Pongal” is celebrated in Tamil Nadu and “Makar Sankranti” in most other parts of India like Karnataka, Kerala, Andhra Pradesh, Telangana, Maharashtra, Bihar, and Jharkhand.

Farmers get together to thank Surya (the Sun God), for the blessing of heat and warmth that enabled the wonderful harvest – a reward for their long months of hard work.

Lohri is an ancient mid-winter festival originating in regions near the Himalayan mountains where winter is colder than the rest of the subcontinent. Historical references to Lohri are mentioned by European visitors to the Lahore Darbar of Maharaja Ranjit Singh such as Wade who visited the Maharaja in 1832.

Further reference is made by Captain Mackeson of Maharaja Ranjit Singh distributing suits of clothes and large sums of money as rewards on Lohri day in 1836 The celebration of Lohri with the making of a huge bonfire at night is also noted in the royal court in 1844.

However, the accounts of the Lohri celebration in royal circles do not discuss the origins of the festival. However, there is much folklore about Lohri. The day after Lohri is celebrated as Maghi Sangrand.

It is though mentioned that Hindus and Sikhs traditionally lit bonfires in their yards after the weeks of the rabi season cropping work, socialized around the fire, sang, and danced together as they marked the end of winter and the onset of longer days. But, instead of celebrating Lohri on the eve of when winter solstice actually occurs, People in Punjab celebrate it on the last day of the month during which winter solstice takes place. Lohri commemorates the passing of the winter solstice.

What to expect during Lohri?

As it is the first celebration of the year, all the children and adults very enthusiastically perform dances. And how can one forget hearing the majestic sound of the beat of the dhol or drums to popular Punjabi folk songs? Last and not least we would witness the glorious and heart-warming sight of the bonfire.

How Lohri is celebrated?

People wake up early morning and visit Temple and gurudwara after taking a dip in the holy waters of rivers to cleanse themselves of their sins. A donation as a charity also happens as a mark of sharing the bounties they have been blessed with. Starting from late afternoon, children start visiting the neighborhood singing Lohri songs and collecting contributions for the bonfire. In almost every house, Sarson ka saag (mustard greens) and Makki ki roti (millet bread rolled flat and roasted on a pan), and sugarcane kheer (pudding) are the special Lohri food items prepared on this day. Traditional snacks include Phully (popcorn), gunna (sugar cane), moongphali (peanuts), and gajak (a sweet dish made of sesame seeds or peanuts and jaggery).

The most exciting part of Lohri celebrations is the gathering of family, friends, and neighbors around the bonfire that is lit after the sunsets. On the chilly night of the Lohri festival, the bonfire adds warmth to all those who congregate around it.

In Punjab, people make small idols of the Lohri goddess with gobar or cow dung. This is lit with wood and has become the grand bonfire that we know and love today. People wear new clothes, and dance to Punjabi folk dances such as Gidda and Bhangra; Lohri songs are sung by children and adults alike. Sugarcane, sweets, moongphali (peanuts), and chirwa (beaten rice) are thrown in the bonfire as offerings to the God of Fire, Agni. They are also distributed as Lohri prasad (special gift or offering).

The Lohri bonfire signifies the discarding of old ideas, notions, and thoughts and the welcoming of new and good thoughts, prayers, and wishes to all those near and dear to you. Agni (fire) is an important witness in Hindu marriages and is the sustaining force of life and hence, people worship and respect it during this festival.

Every Indian festival has a legend behind and so does Lohri.

It is believed to be an occasion to celebrate Agni, the God of Fire, and to worship Surya, the Sun God.  There is the story of Dulla Bhatti, a Muslim bandit who lived during the era of Mughal Emperor Akbar (some say Jahangir). He rescued Hindu maidens from being sold as slaves to the Middle East. He would get them married to Hindu boys in the presence of fire and sing songs in celebration. Thus, began the tradition of the Lohri bonfire. Two maidens named Sundri and Mundri, who were so rescued are included as part of Lohri folklore, Sunder Mundriye. Songs hailing this hero and his brave feats are still sung today. Another folklore is that Holika and Lohri were sisters. Holika perished in the Holi fire while Lohri lived on. It is also believed that since ‘loh’ means light and warmth of the fire, Lohri was derived from that. Since til (sesame seeds) and rorhi (gud or jaggery) are traditionally eaten at this time, a combination of the two – tilrorhi came to be known as Lohri over time.

For a new bride

The in-laws invite the newly-wed bride to their home during the first Lohri after marriage and host a grand feast. The newlywed girl dresses like a bride with traditional garments and adorns herself with the best jewelry – bindi, necklaces, earrings, bangles, toe rings, armlets, waistbands, and anklets. She applies mehndi and fragrances such as sandalwood paste and perfume. As the new bride and groom sit at the center of celebrations, friends and family go up to them to wish them and give them gifts. Traditionally, the in-laws also gift clothes and jewelry to the bride.

The birth of a child is an auspicious occasion that brings joy and hope in the family and so the family celebrates by organizing an elaborate feast for near and dear ones. The maternal and paternal grandparents shower their blessings and gifts on the child. Relations and acquaintances gather to bless and give gifts to the couple and newborn.

What is a better way to celebrate New Year other than Lohri with friendly gatherings, celebrations, and gaiety? But in today’s Covid pandemic times of virtual meetings and video conferences, it’s a welcome tradition and great opportunity to bring everyone closer to our family, friends, and the members of our community – in body, mind, and spirit!!!

From Lakshman Das Sharma to Neem Karoli Baba, The maharaj ji’s life is too inspirational

by The Lost Empires Of Bharatvarsha
Leave a commentCancel comment