The state’s chief secretary was also requested on Saturday by the apex child rights authority to prohibit and block access to the website until such stuff is deleted.

The NCPCR stated that it is acting on a complaint which alleges that the website contains a collection of fatwas that violate the requirements of the country’s legislation and are against the provisions provided under the country’s law.

In a letter addressed to the state’s chief secretary, NCPCR said, “Taking cognisance of the complaint u/s 13 (1) (j) of the Commissions for Protection of Child Rights Act, after pursuing the complaint and examining the website, it was observed that the explanation and answers provided in response to issues raised by the individuals do not align with the laws and acts in the country.”

It said such statements were contrary to the rights of children and open access to the website was harmful for them.

“Therefore, it is requested that the website of this organization may be thoroughly examined, investigated and any such content should be immediately removed,” the letter further read.

“Further, access to such website may be prevented until the removal of such content for avoiding spread and recurrence of unlawful statements and consequently preventing incidents of violence, abuse, neglect, harassment, discrimination against children,” the letter further also included. 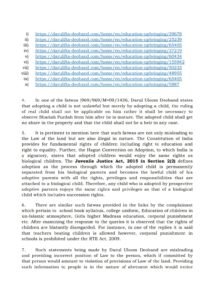 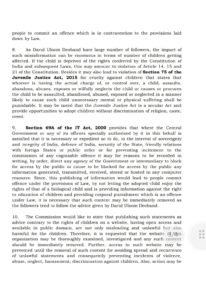 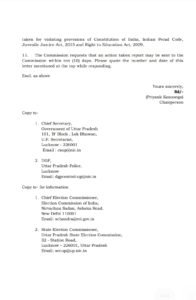 It further requested that the state government take appropriate measures and necessary action against the institution for allegedly violating laws of the Indian Constitution, Indian Penal Code, Juvenile Justice Act of 2015, and Right to Education Act of 2009.

The NCPCR has also ordered the Uttar Pradesh government to provide a report on the steps it has taken within 10 days. The Commission chairperson Priyank Kanoongo in the notice served on Sunday has given 10 days time for the state government to send their Action Taken Report.

Pertinently, such fatwas are not only misleading to the Law of the land but are also illegal in nature. The Constitution of India provides for fundamental rights of children including right to education and right to equality. Further, the Hague Convention on Adoption, to which India is a signatory, states that adopted children would enjoy the same rights as biological children. The Juvenile Justice Act, 2015 in Section 2(2) defines adoption as the process through which the adopted child is permanently separated from his biological parents and becomes the lawful child of his adoptive parents with all the rights, privileges and responsibilities that are enjoyed by a biological child. Therefore, any child who is adopted by prospective adoptive parents enjoys the same rights and privileges as that of a biological child which includes succession rights, the notice said.

“There are similar such fatwas provided in the links by the complainant which pertain to school book syllabus, college uniform, Education of children in un-Islamic atmosphere, Girls higher Madrasa education, corporal punishment etc. After examining the response to the queries it is observed that the rights of children are blatantly disregarded. For instance, in one of the replies it is said teachers beating children is allowed however, corporal punishment in schools is prohibited under the RTE Act, 2009,” it said.

The notice says such statements being made by Darul Uloom Deoband are misleading and providing incorrect position of Law to the person, which if committed by that person would amount to violation of provisions of Law of the land. Providing such information to people is in the nature of abetment which would entice people to commit an offence which is in contravention to the provisions laid down by Law.

The Commission would like to state that publishing such statements as advice contrary to the rights of children on a website, having open access and available in public domain, are not only misleading and unlawful but also harmful for the children. Therefore, it is requested that the website of this organization may be thoroughly examined, investigated and any such content should be immediately removed. Further, access to such website may be prevented until the removal of such content for avoiding spread and recurrence of unlawful statements and consequently preventing incidents of violence, abuse, neglect, harassment, discrimination against children. Also, action may be taken for violating provisions of Constitution of India, Indian Penal Code, Juvenile Justice Act, 2015 and Right to Education Act, 2009. 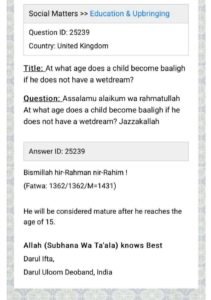 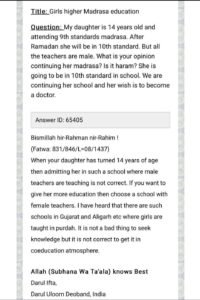 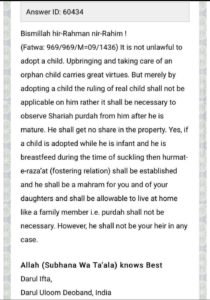 Hence, National Commission for Protection of Child Rights (NCPCR) has sent notices to Uttar Pradesh chief secretary and DGP along with Election Commission on a complaint received against Darul Uloom Deoband’s website

Another Case Of Love Jihad In UP: Shahenshah Khan Dupes Hindu Girl Into Marriage Posing As Brahmin, Assaults Her When His Identity Gets Exposed