Why does this keep happening? In France, a Muslim quoted Qur’an while raping his victim. A survivor of a Muslim rape gang in the UK has said that her rapists would quote the Qur’an to her, and believed their actions justified by Islam. Thus it came as no surprise when Muslim migrants in France raped a girl and videoed the rape while praising Allah and invoking the Qur’an. In India, a Muslim gave a Qur’an and a prayer rug to the woman he was holding captive and repeatedly raping. And the victim of an Islamic State jihadi rapist recalled: “He told me that according to Islam he is allowed to rape an unbeliever. He said that by raping me, he is drawing closer to God…He said that raping me is his prayer to God.” In India, a Muslim kidnapped and raped a 14-year-old Hindu girl, and forced her to read the Qur’an and Islamic prayers. In Pakistan, another Christian woman recounted that her rapist was also religious: “He threw me on the bed and started to rape me. He demanded I marry him and convert to Islam. I refused. I am not willing to deny Jesus and he said that if I would not agree he would kill me.” Rapists demanded that another girl’s family turn her over to them, claiming that she had recited the Islamic profession of faith during the rape and thus could not live among infidels.

The Qur’an teaches that Infidel women can be lawfully taken for sexual use (cf. its allowance for a man to take “captives of the right hand,” 4:3, 4:24, 23:1-6, 33:50, 70:30). The Qur’an says: “O Prophet, tell your wives and your daughters and the women of the believers to bring down over themselves of their outer garments. That is more suitable that they will be known and not be abused. And ever is Allah Forgiving and Merciful.” (33:59) The implication there is that if women do not cover themselves adequately with their outer garments, they may be abused, and that such abuse would be justified.

However, anyone who points all this out will be excoriated as a “racist” and an “Islamophobe,” and accordingly ignored. 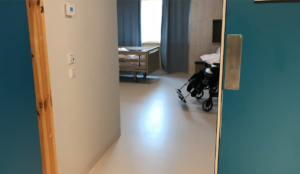 VESTRE FINNMARK DISTRICT COURT: The 20-year-old nursing assistant has been sentenced to four and a half years in prison for raping 92-year-old “Emma.” “Mohamad” exploited his position and trust as a health worker in a particularly cunning way, it is stated in the judgment.

The victim lived in a health institution where she should expect to feel safe and receive good care in the end-of-life phase. For victims, it has therefore been a great burden that she has been raped by a health worker against whom she should feel a special sense of security.

Vestre Finnmark District Court found no mitigating circumstances, and set the sentence higher than the plaintiff’s claim, which was four years and three months.

The very needy Emma (not her real name) was living at Alta Omsorgssenter when the abuse took place on the night of May 8 last year. Mohamad (not his real name) was at work as a nursing assistant.

Mohamad has been in custody since the rape took place. He has consistently denied criminal guilt, despite the fact that his semen with his DNA was detected on Emma. From the verdict:

Defendant explained in court that he did not remember having had vaginal intercourse with the victim. It is also not disputed that it is his semen that was found in the victim’s vagina. On the part of the defense counsel, it has been argued that the accused could not have been criminally sane in the act and thus did not act with the necessary degree of subjective guilt.

However, the court denies that Mohamad may have been insane.

“Emma was defenseless, she was completely unable to defend herself,” said the prosecutor, public prosecutor Trude Kvanli, in her statement in Vestre Finnmark District Court. “She was actually conscious and perceived what was happening around her. She was awake when Mohamad’s colleague, the nurse ‘Alejandro’ arrived.”

“She must have been scared, and she also explained that to [employee at the abuse clinic], who testified here,” Kvanli added.

The prosecutor was heard by the district court, which did not find any mitigating considerations, but several aggravating ones.

The verdict states that Emma was unable to oppose the rape.

The court has found it proved that the aggrieved party was in total need of care. She had almost no movement in her body and was thus prevented from resisting and averting the abuse. At the same time, the court has found it proven that she was awake during the rape. The abuse was thus committed against a person who was awake and conscious and without the opportunity to defend himself. This is a clear aggravating circumstance.

The accused was her caregiver and was aware that the victim was in need of care and almost without language. He thus carried out the rape in the knowledge that the victim could not resist, ask for help or tell others about the abuse afterwards. In this way, he has utilized his position and trust as a health worker in a particularly cunning and trust-inspiring (sic!) way.

After Alejandro arrived and saw Mohamad in Emma’s bed, with his bare ass, he alerted a nurse in the neighboring ward. Afterwards, Mohamad became “affectionate,” Alejandro said:

“He came up to me and started to touch my beard and call me ‘brother, brother, my brother,’ and was a little affectionate. He said I should not say that he was not wearing trousers, because he had been wearing them all along.”

The colleague explained in court that he saw the 20-year-old sitting on the bed, between the legs of the 92-year-old. He repeatedly said that he could hardly believe his own eyes.

“It was difficult to digest what I saw.”

“He became very affectionate, loving. He tried to persuade me. He said ‘brother, brother.’”

“What was he going to persuade you to do?”

“I think it was because I asked if he was wearing pants or not. He said I should not tell the department head about the pants, because then his life would be ruined, the incident would haunt him for life.”

In court, Mohamad explained a traumatic upbringing in Afghanistan, where his father and uncle were killed by the Taliban.

According to the court’s assessment, the accused has experienced many difficult incidents in childhood and adolescence. The flight from Afghanistan to Turkey, the stay in Turkey, as well as the trip to Norway as a refugee, must have felt very difficult for the accused and probably marked him for the rest of his life.

Mohamad arrived in Norway in 2015 and has been granted a permanent residence permit. In 2020, he went to Pakistan and got married. His wife and brother were still living in Pakistan when Mohamad was imprisoned, but since he was no longer able to send them money, they moved to Kandahar, Afghanistan, Mohamad told the court.

Psychopathy and the Origins of Totalitarianism.

WHY IS SANATAN DHARMA SPREADING ACROSS WORLD?

When Ramayana was written? Author of Ramayana