The historic Rajpath has now been renamed as Kartavya(Duty) Path. Earlier its name was Kingsway i.e. ‘King’s street’ or ‘The street of rulers’. The road was named Kingsway in honor of King George V of Britain after the historic ‘Delhi Durbar’ held in 1911. After independence, it was given a new name ‘Rajpath’ by just translation in Hindi. But now the government’s argument behind the name KartavyaPath is that it is freedom from the symbol of colonial slavery. One of the ‘panch vows’ that Prime Minister Narendra Modi took to the countrymen from the ramparts of the Red Fort on Independence Day this year was also a pledge to ‘liberate from every thought of slavery’. The PM had announced the Pancha Prana of ‘developed India, freedom from every thought of slavery, pride in heritage, unity and fulfillment of duties on behalf of citizens’. The impression of the same vow is visible regarding the naming of ‘Duty Path’.

Prime Minister Narendra Modi will inaugurate Kartavya Path on Thursday evening. During this, Union Ministers Hardeep Puri and G. Kishan Reddy will also be present. Rajpath and Central Vista Lawn will now be known as Kartavya Path. After the inauguration, it will also be open to the general public. Not only this, PM Modi will also inaugurate a 28 feet high granite statue of Netaji Subhas Chandra Bose in the Grand Canopy of India Gate. Earlier there was a statue of King George V of Britain which was removed in 1968. On 23rd January this year, on the occasion of the birth anniversary of Netaji Subhas Chandra Bose, his hologram statue was installed in the Grand Canopy. After all, what can be more ‘proud of heritage’ than the honor of the great sacrificer and freedom fighter Netaji.

On September 2 this month, Prime Minister Narendra Modi removed the symbol of slavery from the flag of the Indian Navy. The Navy’s flag which had bore the imprint of the colonial past. The red colored St George’s Cross has been removed from the new flag. In its place a symbol inspired by the royal seal of Chhatrapati Shivaji Maharaj has been installed. There is a tricolor in the top left. On the right is the golden colored Ashoka emblem in an octagon with a blue background. At the bottom is written ‘Sham no Varunah’ in Sanskrit, which means ‘May Varuna, the god of water, be auspicious for us.’ The new flag of the Indian Navy is a shining example of freedom from slavery and pride in heritage. 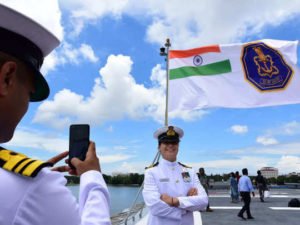 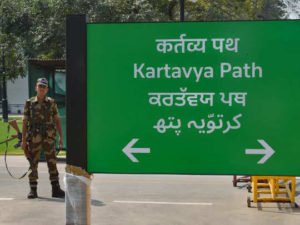 Freedom from the old laws of the colonial era

Since coming to power in 2014, the Modi government has abolished more than 1500 old laws. These laws of the British era had become irrelevant but they were being carried. Many of these laws were instruments of exploitation of Indians under the British Raj.

In 2017, the government merged the Railway Budget with the General Budget, breaking the 92-year-old tradition. Apart from this, the date of presenting the budget was also changed. Since colonial times, the budget was presented on the last day of February. It is now offered on February 1st. These changes may seem small but they are important. The change from the symbols of slavery to liberation is symbolic but very important.

On 23 January this year, a hologram statue of Netaji was inaugurated in the Grand Canopy of India Gate on the occasion of the birth anniversary of Netaji Subhas Chandra Bose. Now in its place there is a grand statue of Netaji, 28 feet high made of granite. Once upon a time there was a statue of George V in this canopy, which was removed in 1968 after 21 years of independence.

‘Abide with Me’ from Beating Retreat

Ceremony The popular Christian prayer song ‘Abide with Me’ from the Beating the Retreat ceremony to be held after the Republic Day celebrations this year was dropped. In its place, Kavi Pradeep’s famous song ‘Ae Mere Watan Ke Logon’ was included. In 2015 also some major changes were made to the Beating Retreat ceremony. Indian musical instruments sitar, santoor and tabla were included in it for the first time.

In January this year, the flame of Amar Jawan Jyoti was merged with the National War Memorial.

In 2015, the name of Aurangzeb Road in Delhi was changed. Instead of the name of the most brutal Mughal ruler, this road was named after the great scientist and former President Dr APJ Abdul Kalam. Dalhousie Road was renamed as Dara Shikoh Road in 2017. In 2018, Teen Murti Chowk was renamed as Teen Murti Haifa Chowk. 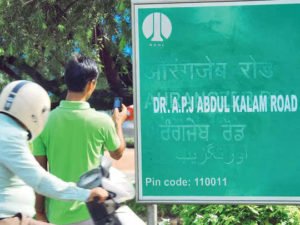 the names of three islands of the Andaman-Nicobar Islands in line with the sentiments of Netaji Subhas Chandra Bose. Netaji even suggested renaming the entire Andaman and Nicobar Islands to Shaheed and Swaraj Dweep in 1943. The Modi government renamed Ross Island as Netaji Subhas Chandra Bose Dweep. Neil Island got the name of Shaheed Dweep and Havelock Island as Swaraj Dweep.

On March 23 this year, Prime Minister Narendra Modi inaugurated the Biplobi Bharat Gallery at Victoria Memorial Hall in Kolkata, on the martyrdom day of Bhagat Singh. The gallery showcases the contributions of the great revolutionaries of India.

Emphasis on education in mother tongue

In the National Education Policy 2020, emphasis has been laid on studies in the mother tongue. Although, for a long time, there has been an emphasis on the primary education being done in the mother-tongue, but now the government is giving special emphasis on it.

of documents PM Modi emphasized on self-attestation of documents in 2014. Earlier, along with applications like jobs, admission for studies, a copy of the certificate attested by a gazetted officer had to be submitted. The ban on this tradition, which has been going on since the time of the British, freed the youth from unnecessary rounds of officials.

The VT mark on Indian aircraft has not yet been released

It has been 75 years since the country got independence but there are still symbols of slavery on Indian planes. Actually, all government and private aircraft operating from the country have a code number that starts with VT. Here VT means Viceroy’s Territory. It started in 1929 during the British rule. What’s the point of this sign even today? Are the skies of India still the territory of the Viceroy of Britain? It is not like that. Many times there has been a demand to change this symbol but it has not been changed. It is possible that later this symbol of slavery can also be liberated.

“return back to your country.” Indians threatened in Irving, texas

Appeasement Of Hindus Is Communal but Favoring Muslims is Secularism: Harsh Reality of India