Pakistan had dreamed of opening a technology institute like IIT in India a few years back. But now this dream has been shattered. The place where this institute was to be built, now there is Bakramandi, whose pictures are going viral. A link to an old article has been tweeted by a former Vice Chancellor and now it is going viral.

Pakistan, which is already struggling with its poor financial condition, is now in the news once again. This time neither its bad economy nor terrorism is being talked about but the technology institute which was to be opened on the lines of IIT of India. Umar Saif, a Pakistani educationist and former Vice-Chancellor of the Information Technology University (ITU), Lahore, is very sad these days. He has expressed concern about the poor education system of the country. Along with this, it has also been told that how the land which was for the university has now turned into a goat market. Doctor Omar has made a tweet in this regard and with some pictures he has told his problem. Dr. Omar is currently working as an advisor to the United Nations Development Program in the country.

He has written an article in Pakistan’s newspaper The Express Tribune. Dr Umar writes, ‘This place was earmarked for the main campus of ITU, which would have been Pakistan’s own MIT. But now this place has remained as a parking place and goat market. With this, the dream of the country’s education system has also been shattered. He has told that this dream was seen for Pakistan in the year 2013. 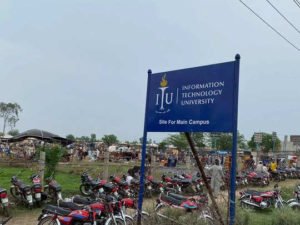 Doctor Saif wrote this article in the year 2016 but he has shared its link again in the past. This article of his and its pictures are becoming increasingly viral. He has told that his aim was to open such a research institute in the country which has facilities like America’s prestigious Massachusetts Institute of Technology (MIT). He gave his dream the title of ‘MIT for Pakistan’.

Dr. Umar Saif himself, has been a lecturer at MIT. He told that he put all his efforts to fulfill this dream. But all the efforts went in vain due to the neglect of the officers and the governments. He said that not a single university in the country is included in the top 700 universities of the world. Many of his proposals were rejected by politicians, bureaucrats and university administrations.

Wherever he went, he would get the answer, ‘Pakistan doesn’t need more PhDs.’ Sometimes someone would answer him, ‘MIT is our shoe, Pakistan itself is great. You don’t know anything about Pakistan’s education system. Many times these reports have been told that the higher education universities in the country are also at risk of closure. No funds have been given to these universities by the government. Along with this, the funds which were already available have also been cut.

5 Things That Campus Left Decided Was Racist In 2021

#AcademicGutters: Hiring and Promotion of Professors based on controversial Woke Commitments, not Merit