I was sleeping in my room when someone knocked on the door. There was a lady at the gate. He said – Your Prime Minister is dying. When I ran towards Shastri ji’s room, the PM of the Soviet Union, Alexei Kosygin, was standing there in the verandah. He raised both his hands up on seeing me. Inside, a team of doctors surrounded Shastriji.

On January 11, 1966, at around 1:30 in the night, Kuldip Nayyar’s eyes have seen this. He was then the Information Advisor to the Prime Minister and reached Tashkent with PM Lal Bahadur Shastri, who hoisted the flag till Lahore, Pakistan in the 1965 war. The then Soviet city is today the capital of Uzbekistan.

A day earlier, in the host of the Soviet Union, Shastri had signed Tashkent Agreement with Pakistani dictator General Ayub. In the agreement, Pakistan gave up the land occupied by India and in return, India had to withdraw the army which had reached near Lahore.

On the other hand, by the time Nayyar reached inside Shastriji’s room, it had been decided that the second Prime Minister of India was no more. According to Nair, his body was on the bed. The slippers were kept neatly, but his thermos of water was lying rolled on the dressing table. It was clear, the restless Shastri tried to drink water, but could not succeed.

After making such a big agreement with Pakistan, foreign land suddenly died like this, is it a conspiracy? Today even after 57 years such questions arise in the mind of every Indian. Let’s know what happened that night?

The agreement was signed in Tashkent on January 10 at noon. After this, the Soviet Union held a party at Hotel Tashkent. Shastri ji stayed there for some time and then returned to his room with his three assistants around 10 pm. In Shastri ji’s room there was a discussion on whether Shastri ji should go to Ayub Khan’s invitation to Islamabad or not.

His aide Sharma said he should not go to Pakistan. Ayub Khan can go to any extent and Shastri ji’s life can also be in danger. On this Shastri ji said, ‘Now he cannot do anything, our agreement has been done and anyway Ayub is a good man.’

After this Shastri ji asked Ramnath to serve food. The food consisted of potatoes, spinach and curry. This food was prepared from the place of the then Ambassador TN Kaul. Earlier, his food was cooked by Ramnath, but on that day the food was cooked by John Mohammed. Two women were helping John in the kitchen. She was from Russian intelligence and in Russia she used to taste Shastri ji’s food before packing it. Kuldeep Nayyar writes that Shastriji’s water was also tasted.

Shastriji was just having his food when the phone rang. Venkataraman, another of his assistants, was on the phone from Delhi. His personal assistant Jagannath Sahay picked up the phone. From there Venkataraman informed about the political movement of India. In India, Surendra Nath Tiwari of the Praja Socialist Party and Atal Bihari Vajpayee of the Jana Sangh criticized the decision. Shastri ji got worried. Then Shastri ji ordered the next day’s newspapers in Kabul.

His son Anil Shastri says , ‘That night he sent Indian newspapers to Kabul. Till then there was no complaint in his conversation and health. It means that he wanted to know what was the effect of his decision in the country.’

Shastriji had not spoken at home for two days. He also talked with his hands at home. He used to adore his daughter Kusum a lot. Asked on the phone – How did you like the decision? Kusum said, ‘I didn’t like it.’ Shastri ji said that how did Amma feel about the decision, make her talk to her.

He used to call his wife Lalita Shastri Amma. The daughter said, ‘Amma is angry with you and is refusing to talk. Why did you give the won part of India to Pakistan?’

According to Jagannath Sahai, Shastriji became sad after this phone call. Ramnath gave him milk to drink. Milk was a part of Shastriji’s daily routine before sleeping. Shastriji asked Ramnath to go to sleep. Ramnath offered to sleep on the floor in his room, which Shastri refused.

Knocked on the door at 1.30 am and asked for water

Kuldeep Nayyar writes in his book that the next day he was to go to Afghanistan, whose packing was going on. According to Tashkent time, at 1.30 am Shastriji was seen by Jagannath Sahai staggering in the lobby. He was trying to say something. With great difficulty he said, ‘Where is the doctor?‘

Shastriji’s doctor RN Chugh was sleeping in the room where the packing was being done. Jagannath Sahai hurriedly made him lie down on the bed with the help of a security guard, gave him water to drink and said, ‘Babuji! You will be fine soon.’

Shastri ji kept his hand near his heart and then fainted. Private doctor RN Chugh checked the pulse and confirmed his death. Doctors from Russia were also called to keep his mind. The injection was given, but there was no action. 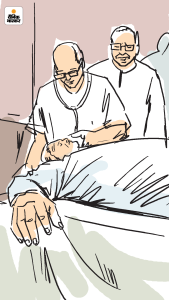 In his book, about Shastriji’s room, Kuldeep Nayyar has written that his sleeper was neatly kept unworn on the carpeted floor. The thermos was lying upside down on the dressing table. It looks like an attempt has been made to open it. There was no alarm or buzzer in the room which is usually on. There were three phones in the room but all three were far away from the bed.

In a short while a tricolor came and Shastriji was draped. After that the picture was taken. The body was brought to India the next day.

Shastri’s family alleged that his body had turned blue. There is also talk of poisoning because the dinner that night was prepared by TN Kaul’s cook Jan Mohammad instead of Ramnath. On the basis of suspicion, the Russian officers caught Jan Mohammad, but then he was released. Jan Mohammad later got a job in Rashtrapati Bhavan.

The talk of poisoning was strengthened by the blueness of the body, which Kuldeep Nayar rejects in his book. He writes that he was told that chemicals and balm were applied to protect the body from spoilage, due to which it turned blue.

Then the suspicious deaths of eyewitnesses started happening.

The issue of investigation into the death of Shastri ji continued to arise. The then government did not even get the post-mortem done. The Janata Party government came in 1977. A committee was formed to investigate. Raj Narayan Committee. At first his personal doctor RN Chugh was to be called for questioning, but his car collided with a truck.

Dr. Chugh died in this accident and his daughter was handicapped for life. This is what happened to his assistant Ramnath. He was badly hurt in a road accident and lost his memory. The condition of the report of this committee has also been tarnished and the report could not be presented till today.

India defeated America’s ally Pakistan in the 1965 war. On the other hand, India had refused to stop the nuclear program despite the pressure of America. India was making nuclear weapons and scientist Homi Jehangir Bhabha was engaged in this since 1944. Coincidentally, just 13 days after Shastri’s death, he too died in a plane crash on 24 January. The threads of both these things connect with an interview.

CIA is America’s intelligence agency. Robert Crowley was the CIA’s director of planning when both these incidents happened. Crowley gave an interview to an American journalist Gregory Douglas in the year 1993 and told that it was the CIA which had killed both Shastri and Dr. Homi Bhabha in January 1966.

Crowley also asked the journalist to publish this interview only after his death. In this interview, he also told the reason for killing Shastri ji. He said that the US was worried that Russia’s interference would strengthen India’s reach. Losing Pakistan hand in hand will damage America’s super power image.

What happened with Nupur Sharma in Court was wrong from every front !!!

Taliban Issues Firman For Sex-Slavery: Orders For List Of Girls Above 15 & Widows Below 45 To Be Forcefully Married To Their Jihadi Fighters . How Can The UN Be Silent Spectator?

For India To Move Up from Number 3: Here is the Clue!