Ravish Kumar’s brother is a former Vice president of Bihar Congress. (The one who is involved in a controversy, I don’t know if he has more brothers). His name is Brajesh Kumar.

Now an under age Dalit girl alleged in Dec 2016 that Brijesh Kumar sexually harassed her with a person named Nikhil Priyadarshi (A businessman). 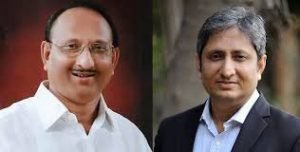 Ravish’s brother had been booked under Sections 376, 506 and 109 of the IPC. The girl is the daughter of another Congress leader in Bihar. In her statement to police, the girl said that Ravish’s brother and Nikhil not only sexually exploited her but also forced her into a sex racket for several highly influential people. After the complaint was lodged, both the accused absconded. Nikhil was arrested by the Bihar police in March 2017 while Brijesh kept absconding till September 2017, when he was given anticipatory bell by Supreme court.

During the whole controversy most of the part of the media was silenced and doesn’t speak or publish much on this issue. Ravish himself didn’t speak on this issue for long but finally he issued a statement to the media wherein he acknowledged the charges against his brother. He denied his hand in trying to save his brother and condemned his brother for not turning himself in and aiding the authorities. He however added that he was certain the charges against his brother were false and hoped that the truth soon comes out.

Hunter Biden Firm Invested In VR ‘Metaverse’ Used by Child Sex Groomers… And His Laptop Shows He Had an Account.

Freedom of Speech and Expression – Hypocrisy of the Liberals.