I shall condense the same and tell you the essential means. Listening to the glory of Shiva, glorifying him by means of words, and deliberation in the mind, these constitute the greatest of the means. Maheshvara is to be heard, glorified and meditated upon.

Thus, Sruti is our Authority.
Resorting solely to this great means, all of you attain the Achievable.

The devotee shall observe fast on Shiva-ratri, both during the day and the night.
He shall perfectly restrain his sense-organs. He shall adore (with flowers) to the extent of his strength. He shall not deceive any one.

One who worships Me on Shiva-Ratri Day, that devotee attains that fruit of worship which is attained to one who continuously worships me for a year.

O brahmins, the five-syllabled mantra of Shiva is the pranava.
The name “Shiva” is used in the dative word with “Namah” as it’s prefix.
Namah Shivaya — It implies the five principles.

It must be known that bad conduct leads to misery and good conduct to happiness.
Hence it is the duty of everyone to acquire goodness for the sake of worldly enjoyment as well as salvation.

He had five faces and three eyes, and the crescent moon on his forehead.
He wore matted hair.
He was white-complexioned and had wide eyes.
His body had been dusted with the ashes. He had ten arms.
His neck was blue in colour. He was bedecked with all ornaments.
He was handsome with respect to every limb.
Three ash-lines marked His forehead. 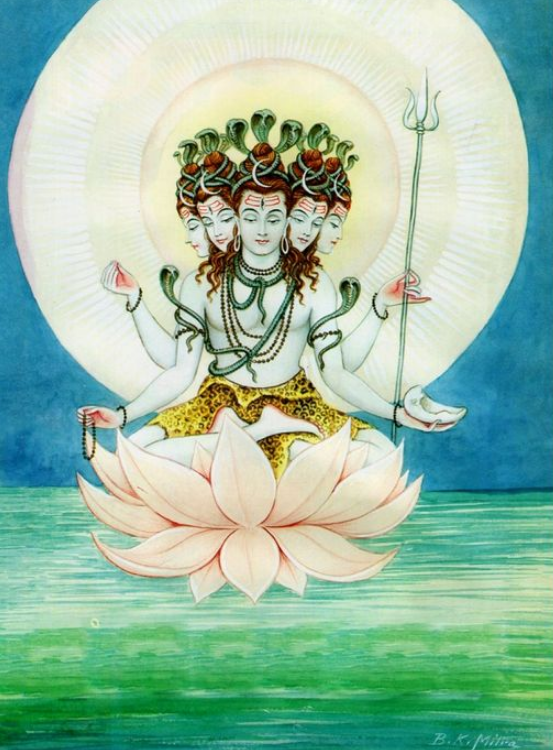 O Vishnu, be the bestower of salvation too at my bidding!
The benefit accruing from your mercy will be the same as that from mine. This boon is given now.
It is the truth, certainly the truth — Vishnu is in my heart and I am in Vishnu’s heart.

O sage, seeing my face and realizing my hint, Kama withdrew his arrows.
Kama was so terribly afraid of Shiva.

After going there, the heroic Kama competent to enchant others spread all his wiles and charmed all living beings.
O sage, spring too showed his prowess in order to disturb Shiva. All the trees simultaneously bloomed.
Kama and Rati played many tricks. All living beings fell victims of their wiles but not Shiva, the Lord of Ganas.

Shiva went from place to place. Sometimes He went to the Top of Meru wherein Gods and Goddesses resided.
He went to different continents, parks and forests on the earth.
After visiting the different places, He returned Home and lived with Satī.

Thus by their mutual association, Kali (Goddess Sati) and Shiva, nurtured the Tree of Love, sprinkling it with waters of emotion.

People are sanctified by merely seeing the person in whose mouth the auspicious name “Shiva” is ever present.

O celestial sage, from the first half of that cluster of matted hair, rose up the powerful Vīrabhadra, the terrifying leader of the Ganas.
He stood lofty with two thousand hands blazing like the consuming fire. He enveloped the world all round and towered over it ten inches more. 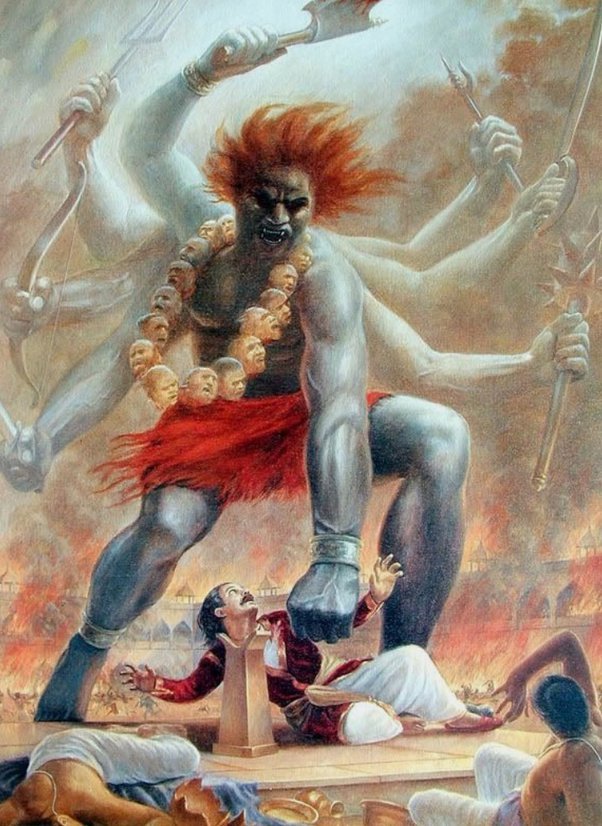 It is at your own bidding that the Asuras have been deluded. You induced them to be deluded (through Maya).
Although they have forsaken their duties and your worship, they cannot be destroyed by others.
Hence, O great Lord, the savior of the lives of the gods and the sages, the Mlecchas shall be destroyed by You, for the protection of the good.

All of the Ganas had thousand arms, matted hair for their crowns, and a crescent moon for embellishment.
They had blue necks and three eyes. They wore Rudrākṣas as ornaments. They had smeared their bodies with fine Bhasma.
They were decorated with necklaces, earrings, bracelets, coronets and other ornaments.

The conclusion of all sacred lore is that the Form of Lord Shiva consisting of the earth that holds the entire universe of the mobile and immobile beings is called Śarva.

The Form of the Supreme Soul, consisting of water that enlivens the entire world, is called Bhava.

The Form of the great Lord Shiva that holds the outer and inner universe and throbs by itself is called Ugra by the noble.

That Form of Lord Shiva consisting of the firmament that pervades everything and affords space to all is scaled Bhīma and it splits and differentiates the group of elements.

That form of Shiva shall be known as Paśupati which is the support of individual souls, and abiding therein splits the bondage that encircles them.

Brightening the entire universe in the form of the sun, the form of Shiva, Isana, moves about in the heaven.

The moon of nectarlike rays that strengthens and fattens the universe to satiety, is the form of Lord Shiva called Mahādeva.

The eighth form of Shiva, the great soul, is the Ātman, more pervasive than the other forms. The universe is pervaded by that form.

The eternal Sruti says— “Isanaha Sarvavidyanām”.
Hence Isanaha (Lord Shiva) is the creator and Lord of the Vedas.

Everything is Shiva.
Shiva is everything.
There is no difference at all.
How is this manifoldness seen?
How is the unity regained? 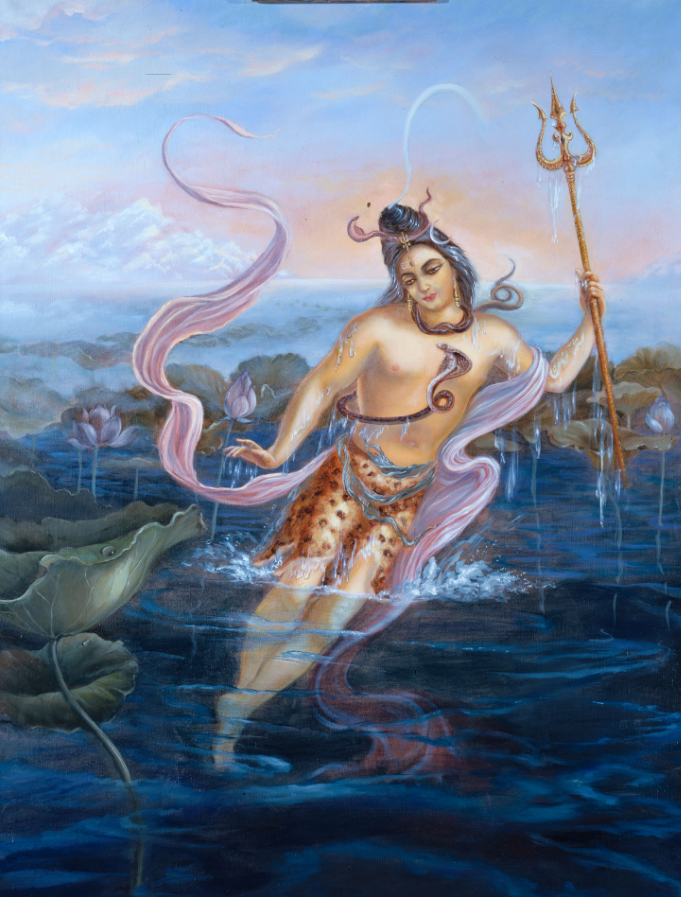 A Puranist Scholar enlightens the people through Shastras, to those people who are in distress due to ignorance. Hence the scholar shall be worshiped.
Among all the deserving men the knower of Purana is the most excellent. He is considered worthy because he saves people from fall.

The Vedas, Shastras, Itihāsas, Puranas and other lores are not extensive glosses and commentaries but succinct account of Perfect Knowledge.

At the end of the letters shall be uttered — Namaḥ, Svāhā, Vasat, Hum, Vausat, Phat. 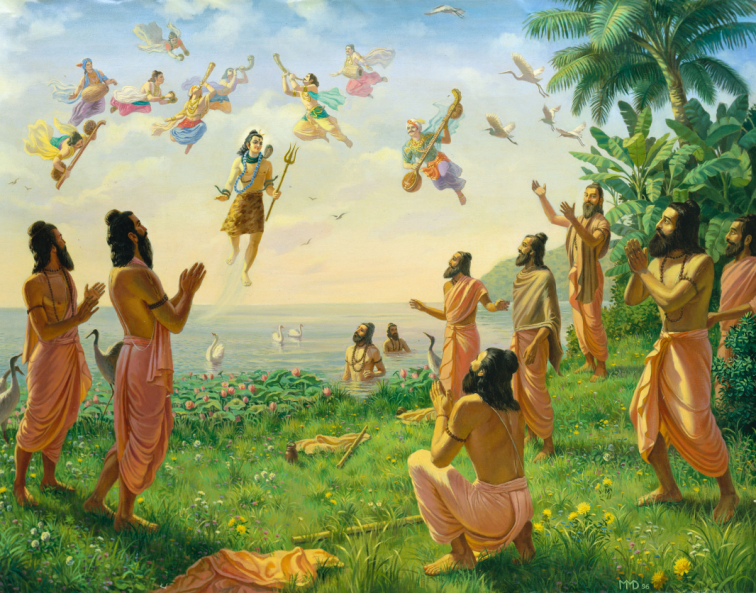 Cow-Killing must be Stopped First for Sanatan Dharma to Rise Again!