Communism – Another name for Violence and Anti-National Activity

I can’t forget that scary day when the left goons beat me and my friends just because we were involved in the Pooja in Kaveri Hostel. A riotous mob of more than 150 communists beats people who came to the Pooja just by seeing their dress, seeing tilak on their forehead or seeing the Laddus in their hands. They even did not leave the female devotee who came to attend the Pooja. There is a famous sloka in Indian society which has been taken from Manusmriti, यत्र नार्यस्तु पूज्यन्ते रमन्ते तत्र देवताः which means where Women are honored, divinity blossoms there. But those people for whom everything other than the book of Karl Marx seems to be false, do not understand the meaning of this verse even after the next 7 births.

We Hindus always have believed in the fact सर्वे भवन्तु सुखिनः, सर्वे सन्तु निरामयाः। सर्वे भद्राणि पश्यन्तु मा कश्चिद्दुःखभाग्भवेत। which means May all sentient beings be at peace, may no one suffer from illness, may all see what is auspicious, may no one suffer. But since the followers of Karl Marx does not believe in the sentiments of any religion, they even didn’t care about our feelings and spoiled the whole event organized on the auspicious event of Ram Navmi. The Indian constitution recognizes the importance of religion in the lives of Indians, and hence guarantees the right to freedom of religion under Articles 25 to 28. The Indian Constitution envisions a secular paradigm in which everyone has the right and freedom to choose and practice their faith. The question that arises here is if the constitution is giving every Indian equal right to worship, then why do these Communists always have problems when it comes to worshiping any Hindu God or Goddess in JNU? If we turn up the history of these left buffoons in JNU, we can easily see that disrupting worship or burning Manu Smriti or opposing the constitution of this country, or raising anti-India slogans is not new for them. If we talk about the anti-India acts of the Left in India, then how can anyone forget the Indo-China war of 1962? When these leftist organizations supported China and did not support India during the war. It has always been a practice for them that first, these atrocious mindset people burn the settlement themselves, and after that, they mourn themselves on the ashes of the remaining settlements. 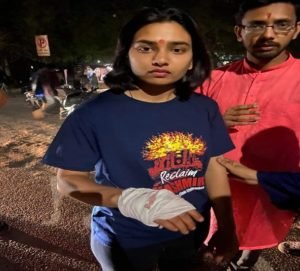 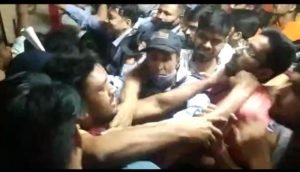 The violent clash at Jawaharlal Nehru University is not something new we are seeing in recent years, but why is this prestigious educational institution the area of implementation of the propaganda of left-wing frustrated mentalities? Leftist ideology has always had a violent history. The atrocities committed by Lenin, Stalin, and Mao on their citizens are not hidden from anyone even today. But, why do they target the days of Hindu festivals? While regular namaz arrangements are being made in the Dr. Ambedkar Central Library and Iftar in the month of Ramadan, why did they lose their tolerance when Ram Navmi also went parallel to the Ramjaan?

JNU was established in 1969 and surprisingly this was the first time in 53 years that Ram Navami pooja was being organized through proper channel in JNU province. But these poor mindset people didn’t want Pooja to take place in Kaveri hostel, where earlier Beef festival used to take place.  This pooja was supposed to begin at 3.30 PM, but it could only begin at 5.00 PM due to the uproar created by leftists. Even with that crooked mindset, they gave many threats to the juniors of our hostels who were involved in organizing the pooja of Ram Navami.

Iftaar and Ram Navami were celebrated simultaneously in the Kaveri Hostel at the university in a peaceful manner. The notion that JNU is a microcosm of Bharat where people with different identities live and study harmoniously was once again established by this simultaneous celebration.

The Left, on the other hand, is oblivious to this fact. As a result, it’s worth noting that the leftists who insulted Goddess Maa Durga in 2014, attempted to disrupt Durga Puja and Saraswati Pooja several times on the JNU campus and propagated false information about Maa Durga (records of which still exist today).

Many people had a basic question in their mind what happened on the 10th of April was happening for the first time in JNU. JNU’s dominant force in the past has been the left-led JNUSU. They have committed numerous sins on campus. In this context, an example from 2014 deserves to be mentioned. JNU’s Kamal Complex (KC) is a market. An effigy of Bhagwan Ram was hung from a tree in front of KC market during Ram Navami in 2014. On that day, the plan was to burn Bhagwan Ram’s effigy on campus records which still exists today. 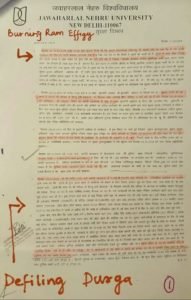 For such Leftists, it was difficult to digest the serene devotion of Iftar and Ram Navami. That’s why they came up with the term “issue.” They devised a comprehensive strategy and put it into action and disrupt the Pooja. First, they created chaos in the Hawan and Pooja and then started the conflict to intervene in the Pooja. And this is not the first time the communists have adopted such a ruse. The Left has carried out many incidents of genocide and bloodshed all over the world, remembering which people’s souls tremble even today. As seen in India too, those who believe in leftist ideology have always adopted violent attitudes from time to time due to their decreasing relevance and anti-social agenda. At the core of the Left ideology is ‘opposition to the state’, but in India, it is often seen that this opposition is not limited to only opposition to the system, but it becomes like a protest against the country. Maoist organizations with radical leftist ideology in India are waging war against India by spreading terrorism. Due to this idea, a large number of security forces and civilians have died in India.

These types of incidents are constantly hollowing out the nation because not having a good environment in the university will negatively affect the quality of education and due to a poor environment, talented and laborious students will afraid to take admission in such a prestigious university. Today’s youth need to understand that proper distance should be kept from the anti-social elements and at the same time they should also be given proper answers so that the morale of such forces can be reduced.

About the author – Adarsh Kumar Jha is currently a student of Jawaharlal Nehru University at Centre for Russian Studies in the School of Language, Literature and Cultural Studies.

An ad from #Turkish political party promises to throw #Pakistanis out of Turkey using Catapults.

JAGMOHAN and the saga of genocide of Kashmiri Hindus

Calling Martand Temple ‘Shaitan ki gufa’ & shooting a dance for the film Maqbool is ok but doing Hindu rituals there is not.