Guru Gobind Singh (Punjabi: ਗੁਰੂ ਗੋਬਿੰਦ ਸਿੰਘ) (22 December 1666 – 7 October 1708) born as Gobind Rai, was the Tenth Guru of the Sikhs. Gobind Rai was a spiritual master, warrior, poet, and philosopher. Gobind Rai’s father, Guru Tegh Bahadur Ji, was executed by cruel Mughal emperor Aurangzeb when he was a child.
The life example and leadership of Guru Gobind Singh Ji have been of historical importance to the Sanatana Dharma. Guru Gobind Singh Ji’s significance to the Sanatana tradition has been very important as he institutionalized the Khalsa (literally, Pure Ones). Guru Ji resisted the ongoing persecution by the Mughal Empire and continued the defense of Dharma, by which he meant True Religion, against the assault of Aurangzeb.
Guru Gobind Singh Ji institution of Khalsa played the key role in protecting the Dharma long after his death, such as during the nine invasions of Panjab and holy war led by Ahmad Shah Abdali from Afghanistan between 1747 and 1769.

Guru Gobind Singh Ji introduced ideas that indirectly challenged the discriminatory taxes imposed by the Mughal authorities. For example, Aurangzeb had imposed different taxes Jizya which is the poll tax on Hindus, Pilgrim tax which is the tax on a visit to Hindu Pilgrimage, and Bhaddar tax which is to be paid by anyone following the Hindu ritual of shaving the head after the death of a loved one and cremation.

Guru Gobind Singh had institutionalized Khalsa and has a deep respect for the Khalsa. He had stated that there is no difference between the True Guru and the Sangat (Panth).
Before his founding of the Khalsa, Earlier Guru Ji movement had used the Sanskrit word Shishya (literally, disciple or student), but afterward, the term became Khalsa. 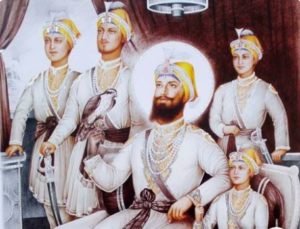 It is also said that some Sikh men deserted Guru Ji during the Anandpur siege in 1704 and escaped to their homes where their women shamed them, and then they rejoined the Guru’s army and died fighting with him in 1705. Towards the end, the Guru, his family, and followers accepted an offer by Aurangzeb of safe passage out of Anandpur. However, as they left Anandpur in two batches, they were attacked, and one of the batches with Mata Gujari and Guru’s two sons – “Zorawar Singh” aged 8 and “Fateh Singh” aged 5 – were taken captive by the Mughal army. Both his children were executed by burying them alive into a wall. The grandmother Mata Gujari died there as well.

Despite fighting throughout his life against brutish Muslims, Guru Gobind Sahib Ji was always without “Nirvair”, meaning “Without Any Differences”, and without “Nirbhau”, meaning “Hatred”. This can be reflected through the instance from history when Guru Sahib allowed “Bhai Kanhaiya Ji” to offer water and medicine to both enemies and friends on the battlefield of Anandpur Sahib. Guru was so humble and compassionate that his arrows had tips made of gold. This was done so that the families of the men killed or injured would be cared for after death, or pay the healing cost.

I pray to Waheguru, in today’s Tyrant world for the bunch of hate-filled people who for their own self-centered agenda is misleading the courageous, pious Sikh community against Sanatana Dharma, should learn from their 10th Guru, Guru Gobind Singh Ji, who fought throughout his life against Barbaric Mughals for saving Sanatana Dharma.

by Pooja Jain
Join the Conversation