As the cases of love jihad, murder by Muslim lovers, and suitcase incidents including the most gruesome incident in which Aaftab chopped the body of Shraddha into 35 pieces and stored them in a fridge, have been the most common ones, Hindus are the center of the dilemma about how to make our girls understand this and how they can overcome such a disaster.

Well at the very first we need to understand from where they are getting such content that is influencing them into other’s faith. Being modern millennial parents almost everyone has been giving smartphones to their daughter’s hand at the age of 15. Now, the first thing they do is make a social media account especially on Instagram. Why Instagram? Of course, the most popular social media site. Now, guess what’s most popular on Instagram? Instagram Reels! Ruled by a centrist-leftist cabal that makes such content that influences young girls to take such steps. When we scroll through Instagram reels we can see a bunch of videos in which girls are shown overthrowing their faith and accepting hijab for the sake of love.

In the case of Shraddha, they met on a dating app in Mumbai. The woman fought for her relationship with her father. And later started living in with Aaftab.

TikTok/Instagram Reels are currently the biggest game changer. Not even one Hindu guy can be found among India’s top 20 TikTok stars; all of them are Muslim males and Hindu girls. Most young people watch these reals for extended periods of time and become brainwashed. Of course, Bollywood and education are also quite important. It won’t work to simply drive youth into kirtan or bhajan. It’s important to recapture these mainstream entertainment channels. 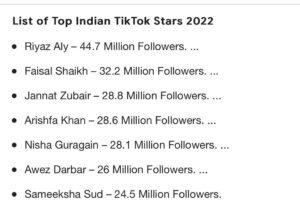 Social media has been so accessible nowadays that hardly anyone can be found who is not using any social media site. Where social media has been a mainstream mode of information and Hindu renaissance, the same social media is used by the Islamist cabal to propagate their religion smoothly with lovey-dovey reels which makes an impact on young girls in their teenagers who are still not mature and want someone with whom they can share emotions.

On the other hand, Most of the girls studying in Intercolleges in the village are neither connected to social media nor read newspapers or watch the news. Even those who are on social media are engrossed in songs, ghazals, and poetry related to their friends. Here, the conversation gap among the family members is to be blamed.

Girls watching Bollywood films where going to a temple is depicted as an old people thing while visiting a dargah is faith, Hindu men are toxic but Salim is the most loyal guy in the town. The glory of secularism is being sung on TV, in school-college, in sports, in newspapers and magazines, and even in course books.

So does the problem lie with a girl? Or her parents or society? Even if you make fun of the issue by laughing at the girls lying in the form of dead bodies in suitcases or freezers, you will not be able to remove this dreadful disease. To overcome this you have to check where the problem lies, and oppose the perpetrator.
Talk about this dreaded disease, discuss it in your neighborhood, and tell the girls that they are on target. Then only we can shield our daughters.

Hey Leftists and Liberals, by attacking #SadhviPragya, you are exposing your hypocrisy and Low IQ

WHAT DOES INDIA EXPECT FROM ITS YOUTH?