Tiwari’s tweet came at a time when the national emblem was unveiled on the roof of the new Parliament building on Monday and the opposition accused the government of spoiling it by changing the appearance of lions in it. The BJP has rejected the criticism of the opposition outright.

“Ever tried putting a lion on a leash. Only one thing happens the leash breaks!” 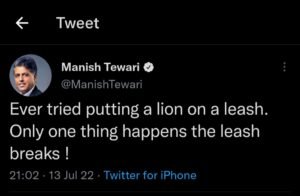 Tiwari had earlier taken to Twitter, reacting to an article titled “Manish Tiwari is being called Subramanian Swamy of Congress”, writing, “The gentleman who does this kind of nonsense should know that Swami if nothing else are also formidable opponents.”

Tiwari, as a member of the Defense Consultative Committee, had on Monday not signed a statement by six opposition MPs demanding the withdrawal of the Agneepath scheme. When Defense Minister Rajnath Singh made a presentation to the members of the Parliamentary Consultative Committee on Defence, Shaktisinh Gohil, Rajni Patil (both from Congress), Supriya Sule (NCP), Saugata Roy, Sudip Bandopadhyay (both from Trinamool Congress) and A.D. RJD) gave him a hand-written note.

Manish Tewari’s separate statement from the party on Agneepath

Sources had said that Tiwari, who publicly praised the Agneepath scheme and called it an urgent reform in the armed forces, had taken a different stand from his party. Describing Tiwari’s statement as personal, the Congress had said that it does not reflect the party’s stand. While the Congress has opposed the Agneepath recruitment scheme in the armed forces, Tiwari said it was the need of the hour as armies of many other countries have also done the same.

Sources had also said that Tiwari asked in the meeting whether the scheme affects the Pension Bill in any way or not. Tiwari is a member of the G23 group of the Congress, which has called for a radical overhaul in the organization and criticized some decisions of the party leadership. Former Union Minister Tiwari is a member from Anandpur Sahib Lok Sabha seat of Punjab. It is also being said that Congress can take some action against him soon.

Hak Bakshish Or “Wives Of Quran”: Tradition Of Enslaving Women By Forcing Them To Marry The Quran