In a joint seminar on Innovation and Indianisation by Navy and Society of Indian Defense Manufacturers (SIDM), the Prime Minister emphasized on becoming self-reliant in the defense sector. Prime Minister Modi said that our aim should be that when we are celebrating 100 years of independence, then our Navy should be at an unprecedented height.

Emphasizing on self-reliance in the defense sector, Prime Minister Narendra Modi said that how long will we take the risk of using the same weapons that the rest of the people in the world also have. He said that it is not wise that ten people in the world have the kind of tools and weapons, I should bring my jawan to the field with the same tools. The PM said that maybe the training of our jawan will be good and he can leave using that tool better. But for how long will I continue to take this risk? Why would my jawan go with the same weapon which is in his hand (army of another country). He will have what he (the enemy) would not have even imagined. He will be finished before he can understand. The PM said that this mood is not only to prepare the soldiers, this mood also depends on what weapon is in his hand.

We have to keep taking lessons from what happened in the past decades- PM Modi The rich trade route of the sea has been a part of our heritage. Our ancestors were able to dominate the ocean because they had good knowledge about wind direction and about space science. Modi said that India’s defense sector used to be very strong even before independence. At the time of independence, there were 18 ordnance factories in the country. Where many types of military equipment, including artillery guns, used to be made. We were an important supplier of defense equipment in World War II. 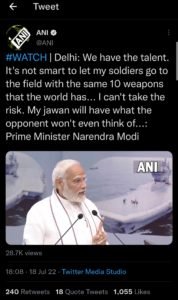 How did we become the biggest importer- PM

PM Modi said that then what happened that we became the biggest importer at a time. He said that in the first one-and-a-half decade after independence, we did not build a new factory. The old also lost its potential. After 1962, there was some change in the policies under compulsion. But the emphasis was not on research, innovation. The world was relying on the private sector but the defense sector was kept within the purview of government thinking. The PM said that no innovation can happen from the goods sold.

Learning from the approach of the past decades, today we are developing a new defense ecosystem with the power of Sabka Prayas. Today Defense R&D has been opened up to the private sector, academia, MSMEs and start-ups. We have given new strength to our public sector defense companies by organizing them in different sectors. Today we are making sure that how we connect our premier institute like IIT also with defense research and innovation.

We have become used to being dependent – ​​PM Modi

The Prime Minister said that there are opportunities abroad for our youth but opportunities in the country were limited. The army also had to depend abroad for simple weapons like rifles. Then it became a habit. To get out of that habit, in a way, psychological seminars will also have to be done. The PM said that once do a seminar that how can one get rid of the temptation of outside things. Referring to the times of the earlier governments, the PM said that then every defense deal was mired in controversy and the army had to wait decades for equipment. He said that dependence on foreign countries is a big threat to our self-esteem as well as strategically. The PM said that we gave impetus to many projects. Soon the first indigenous aircraft carrier will also be commissioned in the Navy. We not only increased the defense budget, but also spent a large part of it on procurement from Indian companies.

We have to start with ourselves- PM Modi

The PM said that if you do not give respect to your child at home, respect, love and give a neighbor, then what is it? We will not respect our weapons, production and would like the world to respect this is not possible. We have to start with ourselves. When India embraced Brahmos, the world has stood up to embrace him. We should be proud of our own thing. The PM said that in the last four to five years, defense imports have come down by about 21%. We did not reduce to save money, but gave our own option. Defense exports have grown seven times in eight years.

The future will have to change according to the front,

The PM said that the threats to national security have also become widespread, the methods of war are also changing. Now the war is moving towards cyber space, economic space, social space. Crude oil is turning into a weapon, everything is being turned into a weapon. So we have to change ourselves according to the future front. We also have to intensify the war against those who challenge the confidence of India’s self-reliance, whether inside the country or outside the country. Modi said that the Hole of the Nation approach is the need of the hour for the defense of the nation.

India has reduced defence imports by 21%, during NaMo rule It’s not just about saving dollars but the pockets that have stopped getting greased That’s why the lutyens lobby is mad Imagine the day when India is 100% independent Dream big India, dream big

Chinese spy in our backyard