In a significant development in the Gyanvapi mosque survey, a giant shivling was discovered inside the disputed Gyanvapi mosque building on monday. Since then netizens have been unable to maintain calm. People have been celebrating the confirmation of their long-held conviction in the presence of the Shivling inside the structure since this massive news broke.

While on the other hand, the likes of Assaduddin Owaisi are busy misleading the people with frivolous assumptions and claims. 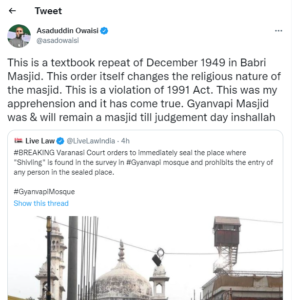 As mentioned in this tweet, Owaisi claims that the Gyanvapi mosque survey violates the Places of worship act of 1991. While the Places of Worship act do not apply to the religious institutions that exist prior to 1947.

The regulation was intended to prevent any new claims to a holy place by any group, as well as any attempts to regain the buildings or land on which they formerly existed. The law was enacted to protect the status quo, which the government at the time believed would help to ensure long-term peaceful settlement.

Main characteristics of the act

According to the Places of Worship Act, 1991,  the religious nature of a place of worship shall be the same as it was on August 15, 1947. The law further specifies that no religious denomination’s holy site shall be translated into one of a different religion or division.

The statute also makes the state responsible for maintaining the religious character of every place of worship as it was at the time of independence.

Disputes exempted from the law

There is, however, an exception to the rule. If the change of status occurred after the cut-off date of August 15, 1947, legal action might be taken under the Places of Worship Act, 1991. This prevents court actions, lawsuits, and appeals involving the possibility of status that were filed after the deadline.

Furthermore, any house of worship that is an antique and historical monument or an archaeological site that is covered by the Ancient Monuments and Archaeological Sites and Remains Act, 1958 is excluded from the statute.

An “ancient monument” is defined as “any structure, installation, or monument, or any tumulus or place of interment, or any cave, rock-sculpture, inscription, or monolith, which is of historical, archaeological, or artistic interest and has been in existence for not less than one hundred years,” according to the Ancient Monuments and Archaeological Sites and Remains Act, 1958.

According to the aforesaid connotation, any monument or place of worship that is more than 100 years old is considered an ancient monument under the law and is thus exempt from the Places of Worship Act.

As a result, the ASI study uncovers a Hindu temple construction within the Gyanvapi site that is more than 100 years old, it could be designated as an ancient monument under the Ancient Monuments and Archaeological Sites and Remains Act, 1958, and so exempt from the Places of Worship Act.

Be careful with excess of “best practices”