The entire cosmic manifestation is the body of the Supreme Personality of Godhead, the Absolute Truth, who has millions of names and unlimited potencies!

He is self-effulgent, unborn and changeless.
He is the beginning of everything, but He has no beginning.

Because He has created this cosmic manifestation by His external energy, the universe appears to be created, maintained and annihilated by Him.

Nonetheless, He remains inactive in His spiritual energy and is untouched by the activities of the material energy.

The Supreme Personality of Godhead is certainly not known to everyone, but He is very powerful and influential.

Therefore, although the serpent of eternal time, which is fearful in force, endlessly chases everyone, ready to swallow him, if one who fears this serpent seeks shelter of the Lord, the Lord gives him protection, for even death runs away in fear of the Lord.

I therefore surrender unto Him, the great and powerful supreme authority who is the actual shelter of everyone.

The Supreme Personality of Godhead creates His minor parts and parcels, the jīva-tattva (Life Essence), beginning with Lord Brahmā, the demigods and the expansions of Vedic Knowledge [Sāma, Rig, Yajur and Atharva] and including all other living entities, moving and non-moving, with their different names and characteristics.

As the sparks of a fire or the shining rays of the sun emanate from their source and merge into it again and again, the mind, the intelligence, the senses, the gross and subtle material bodies, and the continuous transformations of the different modes of nature all emanate from the Lord and again merge into Him.

He is neither demigod nor demon, neither human nor bird or beast. He is not woman, man, or neuter, nor is He an animal. He is not a material quality, a fruitive activity, a manifestation or non-manifestation.

He is the last word in the observation of “Not this, not this,” and He is unlimited. All glories to the Supreme Personality of Godhead!

The Supreme Personality of Godhead said: Freed from all sinful reactions are those who rise from bed at the end of night, early in the morning, and fully concentrate their minds with great attention upon My form; your form; this lake; this mountain; the caves; the gardens; the cane plants; the bamboo plants; the celestial trees;

the residential quarters of Me, Lord Brahmā and Lord Shiva; the three peaks of Trikūṭa Mountain, made of gold, silver and iron; My very pleasing Abode (the Ksheera Ocean); the white island, Śveta-dvīpa, which is always brilliant with Spiritual Rays; My mark of Śrīvatsa; the Kaustubha gem; My Vaijayantī garland; My club, Kaumodakī; My Sudarshana Chakra and Pāñcajanya conch-shell;

My servant, Garuḍa, the King of the Birds; My bed, Śeṣa Nāga; My expansion of energy, Sri; Lord Brahmā; Nārada Muni; Lord Śiva; Prahlāda; My Avatars (Incarnations) like Matsya, Kūrma and Varāha;

My unlimited all-auspicious activities, which yield piety to he who hears them; the sun; the moon; fire; the mantra oṁkāra; the Absolute Truth; the total material energy; the cows and brāhmaṇas; devotional service;

The wives of Soma and Kaśyapa, who are all daughters of King Daksha; the rivers Ganges, Sarasvatī, Nandā and Yamunā [Kālindī]; the elephant Airāvata; Dhruva Maharaja; the Sapta-rishis (Seven Sages / Big Dipper); and the pious human beings (Devotees).

My dear devotee, unto those who rise from bed at the end of night and offer Me the prayers offered by you, I give an eternal residence in the Spiritual Kingdom at the end of their lives. 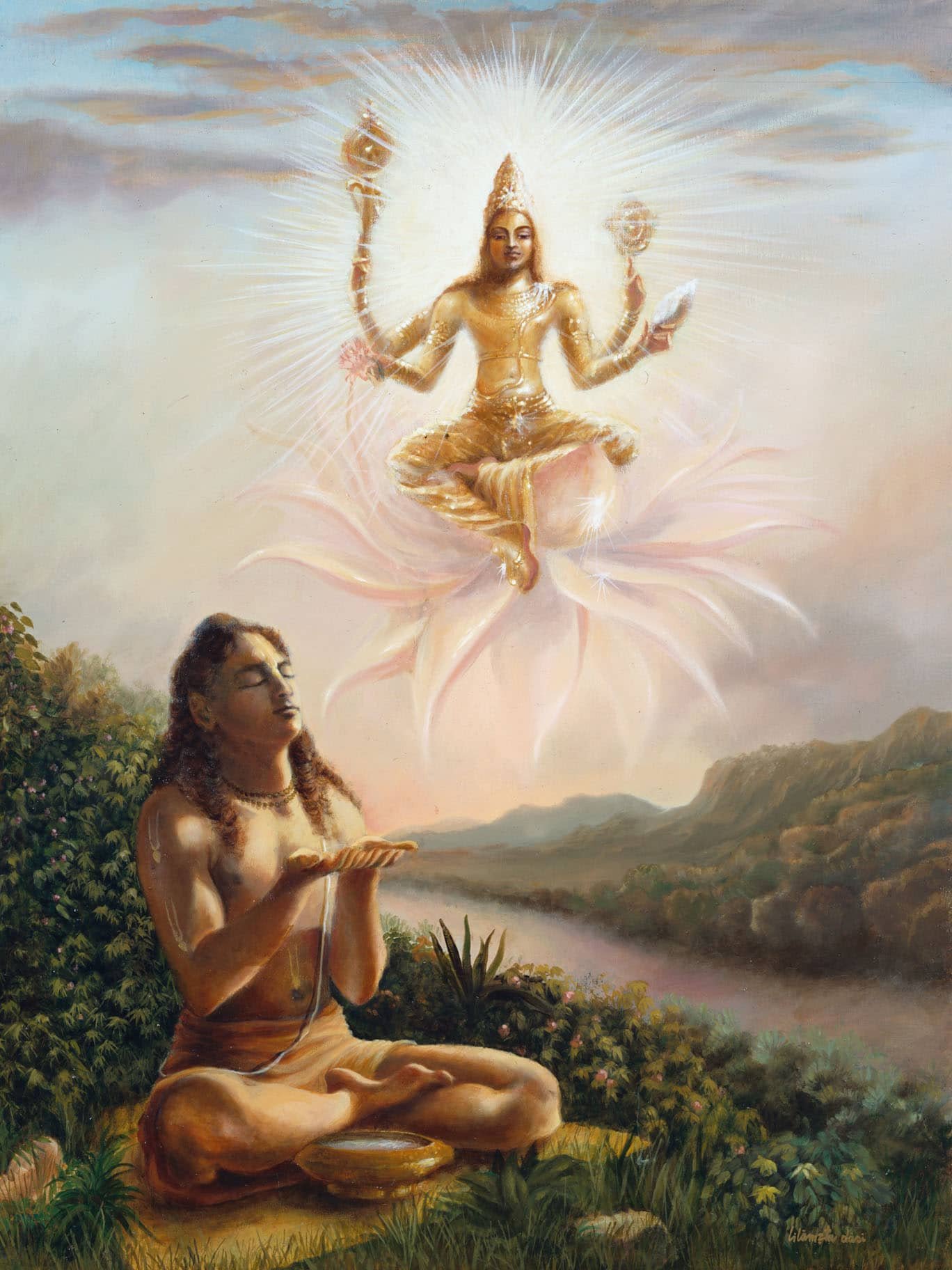 It is said that great personalities accept voluntary suffering (for the benefit of the people), seeing the suffering of people in general. This is considered a good method of worshiping the Supreme Personality of Godhead, who is present in everyone’s heart.

Someone may possess full knowledge of religion but still not be kind to all living entities. In someone, whether human or demigod, there may be renunciation, but that is not the cause of liberation.

Someone may possess great power and yet be unable to check the power of eternal time. Someone else may have renounced attachment to the material world, yet he cannot compare to the Supreme Personality of Godhead.

Therefore, no one is completely freed from the influence of the Material Modes of Nature.

In human society there are various activities performed for the protection of one’s wealth and life by one’s words, one’s mind and one’s actions, but they are all performed for one’s personal or extended sense gratification with reference to the body.

All these activities are baffled because of being separate from devotional service. But when the same activities are performed for, the Satisfaction of The Lord, the beneficial results are distributed to everyone, just as water poured on the root of a tree is distributed throughout the entire tree (The Lord is The Root of the Universe). Those Fools who try to ascend to the Upper Planetary Systems by artificial power or mechanical means, or who try to cross even the upper planets and achieve the spiritual world or liberation — I cause to be sent to the Lowest Region of the Universe (Naraka).

In one kalpa, or one Day of Brahmā, there take place the many changes called vikalpas. O King, all of these have been previously described to you by me. Learned scholars who know the past, present and future have ascertained that in one day of Brahmā there are Fourteen Manus.

O my wife, who are very much attached to household life, if the principles of religion, economic development and satisfaction of the senses are properly followed in household life, one’s activities are as good as those of a transcendentalist. I wonder whether there have been any discrepancies in following these principles.

One should distribute vishnu-prasād (Divine Feast Food) to everyone, including the poor man, the blind man, the non-devotee and the non-brāhmaṇa.

Knowing that Lord Vishnu is very pleased when everyone is sumptuously fed with vishnu-prasād, the performer of the charity sacrifice should then take prasāda with his friends and relatives. 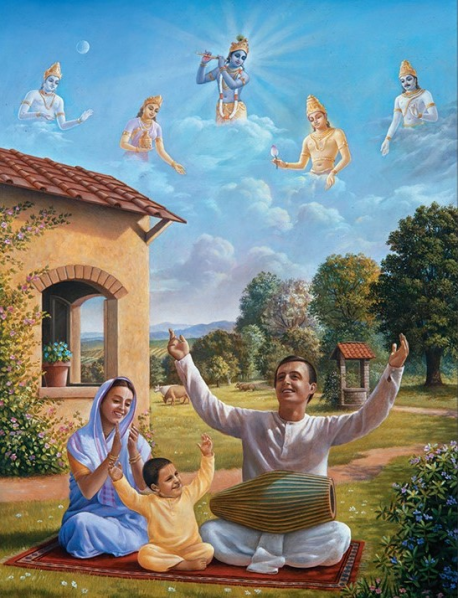 Learned scholars do not praise that charity which endangers one’s own livelihood. Charity, sacrifice, austerity and fruitive activities are possible for one who is capable enough to earn his livelihood properly.

Therefore one who is in full knowledge should divide his accumulated wealth in five parts — For Religion,
for Reputation,
for Comfort,
for Reproduction
And for the Maintenance of his Family Members.

Such a person is happy in this world, and in the next.

Among the great personalities who came to worship the lotus feet of the Lord were those who had attained perfection in self-control and regulative principles, as well as experts in logic, history, general education and the Vedic Literature known as Purana.

Others were experts in the Vedic Accompaniments like Brahma-samhita, all the other knowledge of the Vedas [Sāma, Yajur, Ṛg and Atharva], and also the supplementary Vedic knowledge [Āyurveda, Dhanurveda, etc.].

After devotedly worshiping the upraised lotus feet of the Supreme Lord with oblations of water, Lord Brahmā, who was born of the lotus emanating from Lord Vishnu, offered prayers to the Lord.

As a blind man, being unable to see, accepts another blind man as his leader, people who do not know the goal of life accept someone as a guru who is a fool.

But we are interested in self-realization. Therefore we accept You, the Supreme Personality of Godhead, as our spiritual master, for You are able to see in all directions and are omniscient like the sun.

A materialistic so-called guru instructs his materialistic disciples about economic development and sense gratification, and because of such instructions the foolish disciples continue in the materialistic existence of ignorance.

But Your Lordship gives knowledge that is Eternal, and the intelligent person receiving such knowledge is quickly situated in his original constitutional position.

My Lord, You are the supreme well-wishing friend of everyone, the dear-most friend, the controller, the Supersoul, the supreme instructor and the giver of supreme knowledge and the fulfillment of all desires. But although You are within the heart, the foolish, because of lusty desires in the heart, cannot understand You.

The most skilled warrior in Mahabharatha!