The results of State Assembly elections in 5 States namely UP, Uttrakhand, Goa, Punjab and Manipur were declared yesterday in which BJP passed with flying saffron colour in 4 states. In Uttrakhand, Uttar Pradesh and Manipur the saffron party clutched a full majority. In Goa BJP successfully managed to hold 1 seat less to a full majority. The state assembly elections of Uttar Pradesh got most of the attention obviously because the future of BJP and Bharat rested in the hands of Uttar Pradesh. Also Uttar Pradesh as a state has the greatest representation in the Parliament.

Bhartiya Janta Party’s victory in every state is crucial for the oldest civilization Bharat no doubt. But personally, I believe that the victory of BJP in Manipur holds the greatest importance. Not politically correct but victory of BJP in Manipur is more crucial than it’s victory in UP, Uttrakhand or Goa. Manipur is one of the 7 sisters of Bharat which lies in the North-Eastern part of Bharat. Unfortunately Delhi did not give much attention to North Eastern States of Bharat especially during Congress Era. It won’t be wrong to say historically North Eastern states faced discrimination from the main land of Bharat. The hills account for about 70% area of the NER and accommodate about 30% of the population and the plains constituting the remaining 30% of the area hold about 70% of its population.The region’s accessibility has always remained weak due to geographical reasons and underdeveloped transport links with the rest of India. The north east states are also very less developed as compared to mainland Bharat. One of the reasons for the economic backwardness of the NER is the poor state of basic infrastructural facilities like roadways, waterways, energy and so on as well as social infrastructure like educational institutions, health facilities etc. But it should also be noted that the situation saw a bright light after the coming of Bhartiya Janta Party in the state.

These factors have already turned north eastern states into a delicate thread. Plus the Northeastern regions have witnessed a drastic change in demographics after 1951.Northeast India forms a major region of Christian concentration in India today. Of the 2.78 crore Christians counted in 2011, 78 lakh are in the northeast (including Assam). This is the largest concentration of Christians in India after the coastal region stretching from southern Tamil Nadu and Kerala to coastal Karnataka, Goa and Maharashtra.But unlike other regions, the spread of Christianity in the northeast is almost entirely a phenomenon of the twentieth century. Much of the Christian expansion in the northeast occurred during 1931-51, and more prominently during 1941-51.

Manipur as a state holds 41.29 percentage of Christians with Hindu population of 41.39. Almost all Northeastern shows the same demographics. Christian missionaries are operating in large numbers in north eastern parts of Bharat with an intention of changing the demographics. When a person changes his religion, not only does his method of worship changes but also his relationship with land, water, forest also goes a tectonic change. Na kare Narayan if the demographics of North Eastern States changes and Christians come in majority, Bharat will see a rise in seperatist movements in geometric progressions because a hindu from northeastern Bharat considers the land of Bharat sacred and will never raise his voice to cut his Ma Bharti but when he converts, unfortunately he shares no relation with the land. After conversion to Christianity, this land is no more sacred to him. His only connection and faith lies with Jesus. Therefore if Christians comes in majority in the North Eastern states of Bharat, they will raise their demands for a seperate Christian nation same like we saw in 1940s and Bharat might go a second wave of partition. 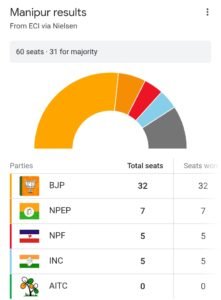 Therefore the win of Bhartiya Janta Party in Manipur should be considered the most important of all. The political party must try all its efforts to bring back people who have converted to Christianity because of various socio-politico-economic reasons.

Modi got a second term-what Trump should have done?