Let me break his wish in 3 pieces. He wants :

I am fine with first and second point. I will be happy if a muslim women becomes a Prime Minister of India.

However, it will be very unfortunate if she wears hijab, burqa or any sort of veil. No matter how much you want to fool yourself or others that a hijab, burqa or a veil is a choice, it is never a choice. The moment you put a women behind a cover, you declare yourself as coward. You have insecurities within your heart or you see women as an object, a sex object.

I personally like women who ask questions, tough questions. As a PM, I would expect her to bring equality :

If that’s the kind of brave women Owaisi wants as a PM of India then we must congratulate him. However what he wants is the more radicalised version of Rana Ayub as the PM of India who would be a plastic toy of her husband who would be beaten if she says no for sex when husband wants it. This wish can only be completed if we let Congress rule us for next 25 years.

Also, an important condition of the Owaisi’s PM candidate will be that she will not meet men. Once senior news reporter Rajdeep went to meet Owaisi at his home & wanted to thank his wife for the delicious food however Owaisi said that my wife isn’t allowed to meet men, only female reporters were allowed to meet his wife. Rajdeep said that in a video. 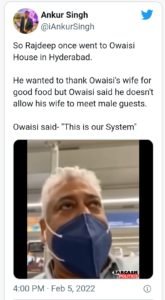 Owaisi has never advocated for any women in Muslim Personal Law Board. This is how the face of law board currently looks like : 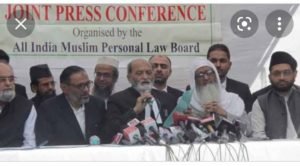 May be there are no Muslim women in India who are talented enough to take those seats.

Though, I am apprehensive that the first people to oppose a Muslim female PM would be the conservative and fanatic Muslim clerics and several many other Muslim men themselves. Prior to that, people would be happy if they see a Muslim woman at least in the leadership of AIMIM.

AKHTARNAMA: Or How Richard Dawkins was Blindsided into Awarding the Taqiyya Master Javed Akhtar

My Husband opened my Vagina’s stiches in front of his Mother, Father and his two brothers!