Exceptions in Places of Worship Act: The Gyanvapi Masjid case is being discussed across the country. The survey work of the mosque complex was over on Monday. Meanwhile, there has been a claim of finding a Shivling in the premises. This has created a stir in the whole matter. The part of the mosque from where the Shivling was found, the Varanasi district court has directed to seal it. It is difficult to say what will happen next, but the 1991 Act is being cited a lot in this whole matter. The name of this act is the Places of Worship (Special Provisions) Act 1991.

As soon as the talk of the Gyanvapi case starts, this act comes on the tongue of all the Muslim parties including AIMIM Chief Asaduddin Owaisi. However, no one talks about the exceptions to this Act. BJP spokesperson Sambit Patra raised this issue during a discussion on a TV channel. He threw light on the nuances of this law. Actually, the debate on whether this law will be applicable in the Gyanvapi case is going on. Opinions of all the parties are divided regarding this. Come, let’s understand the screws of this act here.

What is the Places of Worship (Special Provisions) Act 1991?

This law was made during the Congress government of the then Prime Minister PV Narasimha Rao. According to this law, a place of worship of any religion existing before August 15, 1947 cannot be converted into a place of worship of another religion. If anyone tries to do this, then he can also be jailed. That is, the situation as it was on August 15, 1947, will be considered as it is. This means that the temple will remain the temple and the mosque will remain the mosque.

All the Muslim parties, including Owaisi, are saying on this basis that the Varanasi court’s decision in the Gyanvapi case is wrong. He says that this law does not apply in this case. In view of this, the Muslim parties had approached the Supreme Court. He had asked the court to give an interim order of stay on the survey. It is another matter that on Friday, the country’s highest court had refused to give an interim order of status quo on the survey. However, the top court has agreed to consider listing a petition by the Muslim side against the survey.

What are the exceptions in this law which are not being mentioned?

BJP spokesperson Sambit Patra mentioned the exceptions to this law during a debate on a TV channel on Monday. According to him, there is a big exemption in the 1991 Act. The exception is that if there is any archeological fact found at that place which proves that it is 100 years old or older, it will be out of the purview of the Places of Worship Act. If the Shivling or other idols found in the mosque are more than 100 years old, then the Act will not apply to them.

Know the rule of exceptions Exceptions 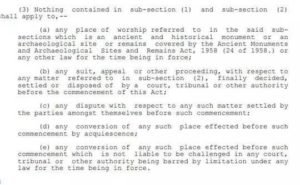 What are the arguments of the Hindu side?

All the parties have their own opinion on whether the law will be applicable in the Gyanvapi case. The Hindu side says that this matter had reached the court in 1991 itself. As such, this decision does not apply to it. At the same time, the other side says that when the law has been made, then all the places will come under its purview.

And under what circumstances the Gyanvapi case can come out of the purview of the 1991 Act?

The Gyanvapi case can come out of the purview of the 1991 Act in other circumstances. For this, the central government will have to adopt the path of amendment in the law. Another option is to move a motion to repeal the law. For example, by making agricultural laws, it was later repealed by the government. This option is also available with the government in the context of the 1991 Act. However, it will not be that easy.

Agniveers will be recruited in 5 grades in the Army:Registration from July, 8th pass also a chance; PM said – this reform is beneficial for the country

Sanjay Singh deliberately posted half video of Yogi Adityanath. Got exposed by neitzens.