It’s funny and alarming at the same time how western media is hell bent in equating the Nazi Symbol “HAKENKREUZ” with “SWASTIKA”. On 26th of September, Western media like Washington Post and The Guardian shared an article which covers the news of an attack which took place in Russian school. The attacker was wearing an outfit which had a Nazi Symbol Hakenkreuz in it but both the newspapers went up to replace the term Hakenkreuz and decided to use Hindu sacred symbol “Swastika” in its place.

“Hakenkreuz” is literal German translation of “hooked cross” and cross is a sacred symbol in Christianity. Nazi “Hakenkreuz” had a Christian eschatological concept of second coming of the Christ with the hooked cross. By contrast “Swastika” coming from “Swasti” which means “well being”. Swastika is a sacred Hindu symbol also used by Jains and Buddhists. The Western media has successfully normalised the use of Swastika in the place of Hakenkreuz in order cover a blanket over the underlying Christian connotation which the symbol has. 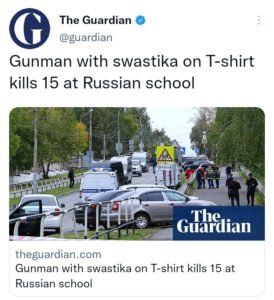 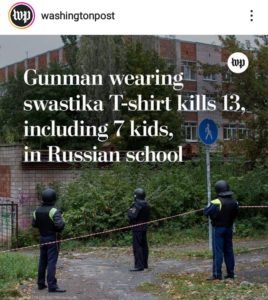 Also during the Ukraine-Russia war where the eyes of every person around the globe was on Ukrainian President Volodymyr Zelenskyy, he decided to use the term ‘Swastika’ in place of ‘Hakenkreuz’ to represent Nazi’s symbol.
Ukrainian President Volodymyr Zelenskyy while delivering his speech said “There is no blood on our flag. There are no and will never be black spots on it. There are no and will never be any SWASTIKAS on it. The Ukrainian flag is the land. Peaceful, fertile, golden and without tanks… So it was. And so it will be. We never wanted this war. But it was brought to us. We never dreamed of killing. But we have to knock out the enemy from our land and from our lives. We have to endure what no other European country has seen in 80 years.”