The market of speculation is hot in the political corridor of Jharkhand regarding senior Supreme Court lawyer Kapil Sibal. According to the discussion, he can be the savior of Hemant Soren in the coming days. It is being said that Kapil Sibal will be the joint candidate of the JMM-Congress-RJD alliance from Jharkhand. In return, they will provide legal aid to Chief Minister Hemant Soren in the aftermath of the Election Commission’s notice in the political crisis.

The Chief Minister is currently looking for a seasoned legal expert or a reputed lawyer to avoid possible ouster action by the Governor or the Election Commission. Who can put his case firmly in the court with legal entanglement and get a verdict in his favor. There is also a discussion that Kapil Sibal can ask for a Rajya Sabha seat for himself as a fee for Hemant Soren to get out of this crisis. Amidst the round of speculations, it is yet to be authentically confirmed by the ruling party or the opposition.

However, if we talk about the latest political situation in Jharkhand, in the near future, a big crisis has arisen on the membership of Hemant Soren’s assembly. The sword of disqualification is hanging on him in the matter of taking the lease of the mine in his name, the office of double profit. The Election Commission has given a notice of action to Hemant Soren under Section 9A of the Representation of India Act. On which Hemant Soren was earlier asked to present his side by 10 May. But Hemant Soren, citing the illness of his mother Rupi Soren, told the commission that he could not read the notice within the stipulated time. One month time should be given to reply. Now the Election Commission of India has given Hemant Soren 10 more days to present his case in this matter.

Meanwhile, former Jharkhand Chief Minister and BJP Legislature Party leader Babulal Marandi has revealed a big secret in a gesture. In his message written on the social media platform Twitter, Babulal has said that there is a discussion that in return for legal aid to Jharkhand Chief Minister Hemant Soren ji for a few days from the crisis arising out of corruption, an outsider has demanded a Rajya Sabha seat from him. Done. In this tweet, Babulal has unannounced a reference to a senior advocate of the Supreme Court, a jurist. Which is being linked to Congress leader Kapil Sibal. Kapil Sibal has retired from Rajya Sabha on 31 March 2022.

In this sequence, Babulal Marandi has targeted CM Hemant Soren directly. He said that whenever the dark face of the Soren family, who collected immense wealth by stealing, dishonesty and looting water, forest land, stones, sand of the poor of Jharkhand, comes to the fore, these people use the shield to protect themselves as tribals. start doing. Babulal asked Hemant Soren in a questioning tone – Hemant Soren ji, does tribal mean only Soren family? 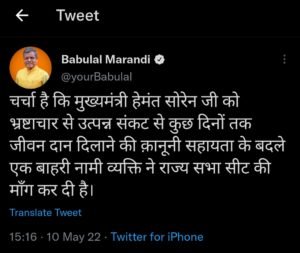 Chief Minister Hemant Soren was also targeted by tweeting on behalf of Jharkhand BJP. BJP Spokesperson Pratul Shahdev wrote- Honorable Hemant Soren ji, pray to God that your mother Roopi Soren gets well soon and comes back to Ranchi soon. But explain one thing that when you can file a reply in Jharkhand High Court on almost the same issue of mine lease three days back, then why not give your reply in the Election Commission? This tweet has been tagged with Hemant Soren, Jharkhand Governor Ramesh Bais, Home Minister Amit Shah and Election Commission.

AKHTARNAMA: Or How Richard Dawkins was Blindsided into Awarding the Taqiyya Master Javed Akhtar

THE 2ND REPUBLIC – Removing Art 370 and Enacting CAA a beginning