Kashmir is a topic which is brings about myriad thoughts in contemporary Indian mind, from pristine tourist spots to heated politics, Indo-Pak tensions, chilling episodes of terrorism.

But there is one major aspect of Kashmir that lies totally forgotten and ignored by a majority of us. It is the contribution and importance of Kashmir until the late medivial period towards Indic religion, philosophy and spirituality.

While almost everyone talks about grand universities of Takshashila (Taxila, now in Pakistan) and Nalanda, the spiritual and philosophical  Head Quarters of Hindu (Vedic)  schools was Sri Sharada Peeth – abode of Goddess of Knowledge – Saraswati or Sharada, which now lies in Pakistan Occupied Kashmir just a few Kilometers away from Line-of-Control (LoC). 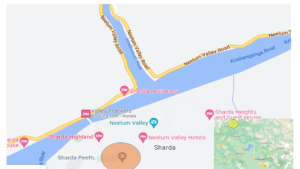 Sri Sharada Peeth lies on the shores of confluence of two rivers – Krishnaganga and Madhumati.  The place was scenic spiritual university where students and saints of Indic philosophy converged. It was greatest warehouse of manuscripts  where great Acharyas came to authenticate and publish their works on Vedanta philosophy. The great historian-poet Kalhana speaks  about the greatness of this holy Shrine thus:

On the  peak of the Bheda giri hill were Ganga has appeared on her own, one can see Saraswati Herself appear in form of Hamsa bird in the pristine lake.

On having a Darshan of Sharada Devi, one can instantaneously obtain sweet (Madhumati) vocabulary (Vani) adored by Poets – A pun on having Darshan of Goddess  Saraswati (Vani) as well as holy dip in river Madhumati.

The great spiritual masters of Vedanta philosophy schools of Advaita and Vishishtadvaita, Adi Shankracharya and Sri Ramanujacharya have travelled all they way from Kerala and Tamil Nadu respectively to this Shrine to establish their philosophical doctrine.

It is believed that the Sri Ramanujacharya who lived approximately 1000 years ago came to Sharada Peeth by foot along with  his disciples in search of Bodhayana Vritti  a detailed  commentary on Brahma sutras by great sage Bodhayana as the sole manuscript of this work existed only here in the great Library of Sharada Peeth.

It was also here that Sri Ramanujacharya’s own commentary on Brahma-Sutras was named as “Sri Bhashyam” by Goddess Sharada Devi herself and gifted idol of her deity Lord Hayagreeva to him.

The Sharada Peeth was thus a great knowledge centre which was fountainhead of various Indic spiritual knowledge stream  that exists today.

It is a great misfortune that today no Indian can visit this hallowed shrine. More depressing is the fact that this Shrine was functional right until 1940s but no now lies in ruins.

But, perhaps the great visionaries and compassionate Acharyas Adi Shankaracharya and Sri Ramanujacharya had envisioned this scenario and have left us keys to connect to and revive this Holy shrine.

Sri Adi Shankaracharya established the Sharada Peeth on banks of Tunga river at Sringeri in Karnataka.

Similarly,  the idol of Lord  Hayagreeva  which was gifted by Goddess Sharada Devi to Sri Ramanujacharya and is today being worshiped at Parakala Matha of Mysuru.

He has taken efforts to trace back this connection sought the blessings of HH Sringeri Shankaracharya and crafted a Moorti of Sharada Devi at Karnataka to be installed in a new temple thate is being built at  Teetwal, which falls on tradition route of Sri Sharada Peeth Yatra on Indian side of Loc on banks of holy Krishnaganga.

Latest from construction of Sharda temple & gurudwara at LoC Teetwal kashmir🍁
An appeal from our local member of construction committee for which I am personally committed by grace of Sharda mata.
But Samoohik participation is always welcome & appreciated.@drdarakhshan @Nidhi pic.twitter.com/OlPpLYCmtj

In the similar lines, the HH Jeer of Yadugiri Yatiraja Mutt which is a Sri Vaishnava Mutt based out of Karnataka has established an idol of Sri Ramanujacharya  as “Statue of Peace” at Srinagar recently.

Taking inspiration from these efforts we should strive to restore the lost glory of Sri Sharada Peeth,  the ruling deity of Kashmir – fountain head of Indic spiritual knowledge. Only then, can the civilization state of India reclaim it is status of Vishwaguru.

How Krishna JanmaBhumi Was Destroyed By Aurangzeb