The Onam myth has been hijacked by a Marxist-Evangelical alliance. They proclaimed that Onam was not a Hindu holiday. Onam is a harvesting festival that is celebrated majorly in Kerala. Although its origins are largely linked to Hindu mythology, Onam is celebrated as a cultural festival across all communities in Kerala. It is one of the most awaited and largest festivals in Kerala as it is mentioned by Marxist scholars.

When examining the origins of Onam, it becomes abundantly evident that the holiday is nothing more than Vamana Jayanti, which honors the birth of the Hindu god Vishnu.

Meaning and history of the term “Onam”

Onam is derived from the Sanskrit word “srona”. The Hindu religion states that the birth constellation of Vishnu is srona/Sravana.
Vishnu was born on Shravana Dvadashi, according to the Bhagavata Purana (8.18).
The studies of various Sanskrit academics who discussed Onam in Sanskrit scriptures show that the words “Onam” and “Shravana” are the same.
For instance, in his book, the Tamilnaduan Sanskrit poet Uddaaa Strin translated Onam as Shravana and portrayed the festival.

According to the Bhagavata Purana, Lord Vishnu was born on Shravana Dvadashi as Vamana. Onam eve falls exactly at this moment and up till Purnima, the Onam festival is observed for four days. Even Southern Tamil and Malayalam traditions concur that Lord Vishnu’s birth as Vamana is celebrated on Onam.
Since the beginning, Onam has been observed in Tamilnadu-Kerala as the birthday of “Asura destroying” Vishnu rather than as the Bali festival

In the middle centuries, people continued to observe Onam as Vishnu’s birthday.
Onam was still observed as a Lord Vishnu holiday in medieval southern literature like the Divya Prabandham from the 10th century. Vishnu was served prepared rice and fruits.

It was/is believed in Kerala that Mahabali returns from Sutala each year to visit his homeland and celebrate the birth of Lord Vamana at the Vamana temple in Thrikkakara (literally, “place of holy foot”) temple in Kochi.
Onam was a Vishnu festival, according to independent sources.

Malabar was collected by William Logan in the 19th century. He stated in his “Malabar Manual” that Keralites held the belief that Vishnu visits his worshippers on Onam. Vishnu is joined by his follower Bali.

The accounts of Onam that Francis Day, an English ethnographer who had resided in Kerala in the 17th century, had heard from locals, were replicated in his book.
Even he attests that Onam, according to the Keralites of his time, was a celebration honoring the arrival of Vishnu.

The Thirikkara Vamana temple in Kerala is where Onam is first mentioned (861 CE). Onam is still honored in this place as Vamana’s birthday today. Every year on this day, Bali is said to return to adore the Lord. Vamana Murti (the idol) is brought out in processions. Hinduism does not have a centralizing authority like the pope, in contrast to Abrahamic religions. This is the reason that over the years, among numerous communities that observed the festival in varied ways, the style of the Onam celebration has changed.
The fact that Onam was originally a holiday honoring Vishnu’s birth is unaffected by this. Even now, traditional Onam honors this feature. Thrikkakara Appan, a clay pyramid portraying Lord Vamana, who is revered as the guest, is the most significant aspect of Onam.

The evangelists have concocted a tale that Bali was a “Dravidian” king who was vanquished by “Aryan” Vamana after erasing the importance of Vishnu in Onam. However, not even in the so-called “Aryan” Puranas is there any similar hostility toward Bali. The Bhagavata Purana claims that Vishnu appears as Vamana to gauge Bali’s kindness. He gives Bali a boon after being satisfied. Bali, however, only has one desire. to stay close to Vishnu always.

Vishnu departs from Vaikunta as a result and travels to Bali’s new home of Sutala, where there is no fear, hatred, or disease. According to Srimad Bhagavatam (5.24), Lord Vamana served as Bali’s gatekeeper in Sutala, which is more opulent than Svarga.

When Ravana attacked Sutala, Vamana drove him out. Such is the lovely relationship that Bali and Bhagwan had. Even that is not safe from the eyes of hateful Marxists, and for all that drivel about “Aryan” Vamana and “Dravidian” Bali: 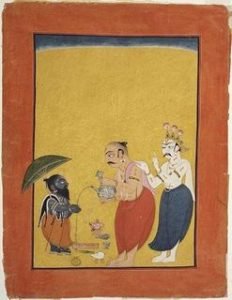 Vamana is a stunning dwarf with a black complexion. Bali is depicted in this painting as the Brahmin wearing choti. Rishi Kashyapa was the ancestor of Bali.

All around India, Onam/Shravana is celebrated. But Kerala has preserved a lot of the traditional elements of this old event.

For instance, according to the Garuda Purana, Vamana must be worshipped on Shravana Dvadashi with sacrifices of umbrellas, shoes, and other items.
Kerala continues to practice this now. Thrikkakara Appan, a manifestation of Trivikrama Vishnu/Vamana, is being worshipped today in accordance with Garuda Purana’s instructions, complete with umbrella offerings and other rituals.

Brahmastra: a saga of manipulation and booking scam