In the past few weeks there has been a discussion in the Delhi High Court after a PIL was filed seeking the criminalisation of sex within marriage without the wife’s consent, which is as of now not a criminal offense because it does not de jure amount to rape under Section 375 of the Indian Penal Code.

The points of contention are:

1. Already existing provisions which can bypass the exception in IPC Section 375;

2. Validity of testimony, and false cases;

3. The Family structure and marriage.

Let us discuss each of these points of contention.

Sexual abuse and physical abuse has been classified as acts which constitute domestic violence according to Section 3 of the Domestic Violence act of 2005 as follows:

For the purposes of this Act, any act, omission or commission or conduct of the respondent shall constitute domestic violence in case it-

(a) harms or injures or endangers the health, safety, life, limb or well-being, whether mental or physical, of the aggrieved person or tends to do so and includes causing physical abuse, sexual abuse, verbal and emotional abuse and economic abuse; or

(b) harasses, harms, injures or endangers the aggrieved person with a view to coerce her or any other person related to her to meet any unlawful demand for any dowry or other property or valuable security; or

(c) has the effect of threatening the aggrieved person or any person related to her by any conduct mentioned in clause (a) or clause (b); or

(d) otherwise injures or causes harm, whether physical or mental, to the aggrieved person.

This is a legitimate legal provision for booking an abusive husband, and citing Section 498A of the Indian Penal Code, and Section 13 of the Hindu Marriage Act of 1951, on grounds of cruelty such an act can be also considered as a ground for divorce by the woman. In a judgement in 2021 the Kerala High Court ruled the same , which ossified marital rape as a de jure civil offense; however this does not necessarily lead to a penalty. When it comes to treating it as a criminal act, we must take into account the fact that even though IPC Section 354 can be used to classify the act into a lesser crime namely that of sexual assault instead of a full blooded rape this is a mere loophole in the legislation which is subject to exploitation by the lawyers and most importantly the judge while hearing the case and releasing the final judgement. The Law sees what it is made to see, and if there do not exist proper criteria of classifying any act as an offense then the whole judgement becomes very subjective in nature, and may vary in interpretation. This subjectivity in interpretation is significant because it affects the functioning of future cases, and enables cunning people to exploit the already failed system for their own benefits. Owing to such vagueness it depends completely on the judge to prioritise which section he deems fit, and it also at the discretion of the lawyers who could choose whether or not to emphasise on such loopholes while fighting their respective cases. Pointing out such loopholes is merely a temporary means of recourse, it cannot and does not serve as a proper guarantee of usage for there are conflicting sections in the penal code, either of which could be prioritised in the end.

Validity of testimony, and false charges

This is what I consider the only genuine point of contention with respect to such a scenario. Section 498A has been fervently misused by wives to exploit their husbands and this indeed is a genuine fear of men regarding the flaws in the system itself.

In a criminal case, the accused is treated as innocent until proven guilty in front of the judiciary owing to Section 114 of the Indian Evidence Act. However in case of an offense of rape an exception is made in the norm (documented by Section 114A of the same)[3] and the accused is instead treated as guilty until proven innocent, with the alleged victim’s statement setting the baseline for trials. 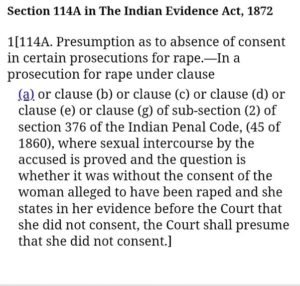 This is often condemned as draconian and unfair because it apparently takes the woman’s claims at face value, citing the whole provision as anti-male. However this interpretation is incorrect because it is nothing but a compromise, a forced compromise for the State owing to another contentious judgement.

Why is it a forced compromise? Because in a case of rape, or for that matter a sexual act, there is first of all a lack of a neutral witness. The only parties near the people involved are the people themselves hence in a matter of rape, the witnesses are going to be the accuser and the accused. Now if sexual intercourse during the period of the act has been proved it is merely depends on whether there was coercion or not.

CASE 1: If there was no coercion and she alleged rape, there are ways in which her claims can be challenged namely 1. consistency of her own statements (also found in Section 155, 156 and 157 which relate to statements of witnesses- in this case the only witnesses are the accused and the accuser), 2. Testimony of the accused (which in this assumption of him being innocent, will be clearly more reliable as far as the timeline of events is concerned), 3. Evidence produced in favour of number 2. (which could be somewhat relate to the person’s physical presence at the time of the act), and 4. Scenarios which arise in the accuser’s statement hinting to a possible mistaken identity.

CASE 2: If there was coercion, it is more often than not likely that the accused will resort to either 1. Denial during the proceedings(which can be cross-examined by the prosecution), 2. Since rape is an act of coercion there exists a highly significant chance that the accused party behaved in a manner which would subdue the accuser’s feelings and for her submission would appear inevitable during the timeline of events that transpired, 3. Body language matters a lot during trial, because this alone sets the tone for the whole case- lawyers can and do raise questions about the body language of the witnesses during trials.

(N.B. The same clauses mentioned separately for case 1 and case 2 are applicable for both the two cases, and are not mutually exclusive in their validity)

Owing to trauma (arising from) and coercion, a person’s speech, posture, demeanour, and conduct are adversely affected- sometimes leading to a total reversal of personality. It cripples one to an extent he would feel like he would never get out of it, and one would never forget it no matter how much he tries to- this affects overall body language (the importance of trials mentioned in the clause just following this one) and one can judge whether the trauma was real, during the trial itself. If she was indeed coerced, it would be written on her face that she was. Unwilling submission and not demonstrating resistance because of physical differences and being locked in a difficult position (this is considered the reason behind section was created) is coercion, and so are subsequent threats deterring her from even approaching the administration (for lust and tyranny are intertwined in such cases).

The law therefore has to set a baseline- it is compelled to, for in such cases there cannot be any vague grounds of judgement as a result it has only two options here- either innocent until proven guilty, or vice versa. If the law assumes innocent until proven guilty the genuinely accused would never be proven guilty because he already exercises control- control over both the accuser and by buying the administration; if the law assumes guilty until proven innocent this ends up eliminating the de jure immunity of the offender and neutralises the coercive spirit exercising which he or his supporters could influence the witnesses and parties involved in the investigation.

Coming to misuse, the fear is genuine however if it is to be treated as a valid ground of not criminalising an offense then all rape laws should be revoked because of low conviction rates.

Instead of opposing the removal of the exception in IPC Section 375, those who fear a misuse and a bias in the legislation should ask for a simultaneous discussion regarding the same, from the same Failed State which has allowed people to create havoc by misusing the law.

People who have opposed this law, namely MRA groups and most notably entities like the Central Government, and even Supreme Court judges like Dipak Misra in the past have cited the destruction of family structure.

In response to such claims, my views –

Communists and Western Brown Sepoys often allege that, Hinduism is regressive to women and hence don’t support any law against it.

My response from the religious and legal point of view –

CRIMINALISING MARITAL RAPE WILL NOT DESTROY THE FAMILY STRUCTURE –

(The groom says this to the bride during Panigrahana)

“This I am, That art thou

The Heavens I, the Earth thou”

The metaphorical implications of this can be understood from Chandogya Upanishad which mentions the significance of what one can call a ‘partnership’ of Ŗc and Sama.

This implies that the Earth is the foundation for the fire which gives the fire its legitimacy.

The relevance here is that the WIFE gives legitimacy to the relationship and to her husband.

The status of the wife is extolled as such in Dharmashastras and Dharmasutras.

The children, the aged, the emaciated and the sick should be regarded as the lords of Ākāśa; the elder brother is equal to the Father; the wife and the son are one’s own body.

Therefore it is the WIFE which is the family structure.

Everything isn’t about Hindu family structure/institution. We need to first define consent wrt men, codify it in a law, make rape laws flexible (along with bringing romeo juliet laws) then maybe bring a law against Marital Rape. And most importantly in India, only Hindus( Hindu law recognizes Sikhs, Jains and Buddhists as well) don’t reside in India, there are Muslim/Christian/Parsee too who have their own personal laws.

Codify it uniformly after addressing all the issues since IPC/CrPC were bought in 1861 by Colonial Masters and laws in India cannot be open-ended.

P.S. These are purely my opinions.

MARITAL RAPES DO HAPPEN but explain it in a manner that some girl who isn’t literate too understands the complex legal nuances and must not become a tool to abuse.

It should be clear, on an examination of the Hindu texts as to what indeed cripples the family structure. It also needs to be acknowledged that those who claim to protect the family structure have now resorted to a desperate attempt at calling upon people to boycott marriages themselves! If they were so concerned about the family structure and the preservation of the race they would not have whitewashed the abusers who operate behind closed doors, tormenting and torturing their wives and nor would they have been calling upon people to boycott the sacred institution of marriage which they themselves seek to defile.

UNHRC Chief Michelle Bachelet applauds China for its ‘efforts’ on human rights. Know the what the previous reports say