The film is the first part of a 10-part Indic documentary series by the most adored Indic Film production studio, Prachyam Films.

It has been a dream for this young group of filmmakers to reclaim the Indic narrative from the colonial one that India has been fed with and for far too long. Under the banner Prachyam, they are now ready with the first film which will be released on Nov 14.

Titled, “Sahebs Who Never Left,” the head of the production Abhishek Pratap Singh says, “We had embarked upon a year-long project to dive deep into the ocean of Indology and bring forth the choicest of pearls, in a format that will be cinematic enough for the thrill-craving millennial generation, yet informative enough for Indology enthusiasts. So we are happy to say that our first film is now ready for release.”

“Sahebs Who Never Left,” speaks about the English men AKA ‘Gora Sahebs’ who colonized Bharat in disguise of ‘civilizing’ the indigenous people through various means such as assault, excessive taxes, creating the caste divide, atrocity literature, destroying the guru shishya parampara, partition and many more.

The film tells the true story of Bharat and showcases the deep-rooted racism and hate of Englishmen towards the indigenous cultures and traditions, further how they created ‘Brown Sahebs’ in Bharat who, till date, carry the burden of Whiteman.

Praveen K Chaturvedi, the CEO and Chief Director of Prachyam says, “We are staunch believers in quality over quantity. There is a lot of content being produced in pockets all around the internet, but very less portion of that is something that has repeat value. And that is the niche we strive to fill. The road to quality visuals is often littered with overtimes and slow turnarounds, but the results echo in eternity. And eternal content over ephemeral is what we are aiming towards. We hope our first film is a step in that direction.”

Prachyam started in 2020 with a small but zealous team that has been engaging with an international community of Indologists that include leading scientists, educators, storytellers, conservationists, technologists, and many other changemakers who have helped define critical challenges of our times, drive new knowledge, advance new solutions, and inspire positive transformative change. In just 2 years Prachyam has garnered a considerable Social community size and its videos and short films being viewed by millions, who love and engage with their films and content on YouTube, Instagram and Twitter.

Kshitiz Rai, the Chief Creative Director, says, “We are a group of filmmakers, who wake up every day to make Indic identity a matter of pride for the masses out there! Prachyam uses the power of cinematic expression, and storytelling to illuminate and further India’s glorious traditions andmessage. The brilliant philosophy and deep values of Bhārat always move us, and that’s what we express in our creations.” 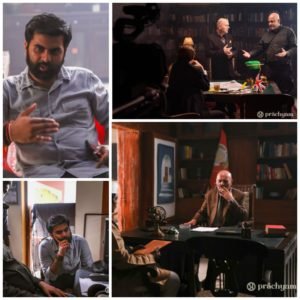 As “Sahebs Who Never Left,” is all set to release, fans of their content are already excited as is witnessed on Social media. From a Twitter user (@VIVEKSARSWAT22 ) saying “Bahut dekh liya Bollywood, ab wait nahi ho raha, Indic films ka,” to @TandonAmay saying “The myth that will be finally busted by the #10indicfilms alongside other so many myths,” the project is seeing encouragement all over. “Sahebs Who Never Left,” releases on Nov 14 on the Prachyam YouTube channel <https://www.youtube.com/prachyam>.

Teej : “Festival Which Signifies Love and Devotion of Hindu Women Towards Their Husband”