When the luminaries in the sky, such as the moon, the sun and the stars, are reflected in liquids like oil or water, they appear to be of different shapes — sometimes round, sometimes long, and so on — because of the movements of the Wind.

Similarly, when the living entity, the soul, is absorbed in materialistic thoughts, he accepts various manifestations as his own identity because of ignorance.
In other words, one is bewildered by mental concoctions because of agitation from the material modes of nature.

In this world, we can see that pots, dolls and other products of the earth appear, break and then disappear, mixing with the earth.

Every man is certainly controlled by destiny, which determines the results of one’s fruitive activities. In other words, one has a son or daughter because of unseen destiny, and when the son or daughter is no longer present, this also is due to unseen destiny. Destiny is the ultimate controller of everyone. One who knows this is never bewildered.

If even only once or even by force one brings the form of the Supreme Personality of Godhead into one’s mind, one can attain the supreme salvation by the mercy of Krishna, as did Aghāsura.

What then is to be said of those whose hearts the Supreme Personality of Godhead enters when He appears as an incarnation, or those who always think of the lotus feet of the Lord, who is the source of transcendental bliss for all living entities and by whom all illusion is completely removed?

Thinking in this way, Lord Balarama was able to see, with the eye of transcendental knowledge, that all these calves and all of Krishna’s Friends, were expansions of the form of Sri Krishna.

Those who, even while remaining situated in their established social positions, throw away the process of speculative knowledge and with their body, words and mind offer all respects to descriptions of Your personality and activities, dedicating their lives to these Narrations (of Vedic Literature), which are vibrated by You personally and by Your pure devotees, certainly conquer Your Lordship (with their love and devotion), although You are otherwise unconquerable by anyone within the Three Worlds.

My dear Lord, one who earnestly waits for You to bestow Your causeless mercy upon him, all the while patiently suffering the reactions of his past misdeeds and offering You respectful obeisances with his heart, words and body, is surely eligible for Liberation, for it has become his share.

The conception of material bondage and the conception of liberation are both manifestations of ignorance. Being outside the scope of true knowledge, they cease to exist when one correctly understands that the pure spirit soul is distinct from matter and always fully conscious.

At that time bondage and liberation no longer have any significance, just as day and night have no significance from the perspective of the Sun.

Just see the foolishness of those ignorant persons who consider You to be some separated manifestation of illusion and who consider the self, which is actually You, to be something else, the material body.

Such fools conclude that the Supreme Soul is to be searched for somewhere outside Your Supreme Personality.

My dear Lord Krishna, until people become Your devotees, their material attachments and desires remain thieves, their homes remain prisons, and their affectionate feelings for their family members remain foot-shackles.

For those who have accepted the boat of the Lotus Feet of the Lord, who is the shelter of the cosmic manifestation and is famous as Murāri (Destroyer of The Mura Demon), the ocean of the material world is like the water contained in a calf’s hoof-print. 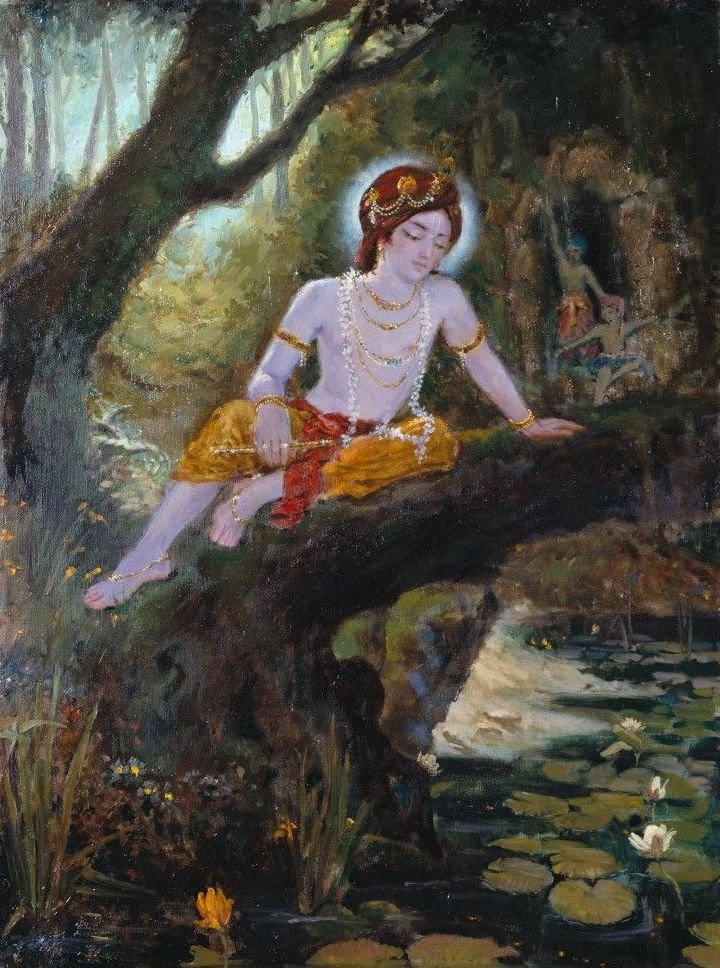 In the evening twilight during the rainy season, the darkness allowed the glowworms but not the stars to shine forth, just as in the Kali Yuga, the predominance of sinful activities allows Atheistic Doctrines to overshadow the True Knowledge of the Vedas.

One who is neutral may be avoided like an enemy, but a friend should be considered like one’s own self.

The Supreme Lord said: It is by the force of karma that a living entity takes birth, and it is by karma alone that he meets his destruction. His happiness, distress, fear and sense of security all arise as the effects of Karma.

Even if there is some Divine Rewarder who awards all others the results of their activities, He must also depend upon a performer’s engaging in activity. After all, there is no question of being the bestower of fruitive results unless fruitive activities have actually been performed.

Śukadeva Gosvāmī said: The status of powerful controllers is not harmed by any apparently audacious transgression of morality we may see in them, for they are just like fire, which devours everything fed into it and remains unpolluted.

The Supreme Lord has no favorite and no dearmost friend, Nor does He consider anyone to be undesirable, awful or fit to be neglected. All the same, He lovingly reciprocates with His devotees in whatever manner they worship Him, just as the Desire Trees of Heaven fulfill the desires of whoever approaches them.

They are the real father and mother who care for, as they would their own sons, children abandoned by relatives unable to maintain and protect them. 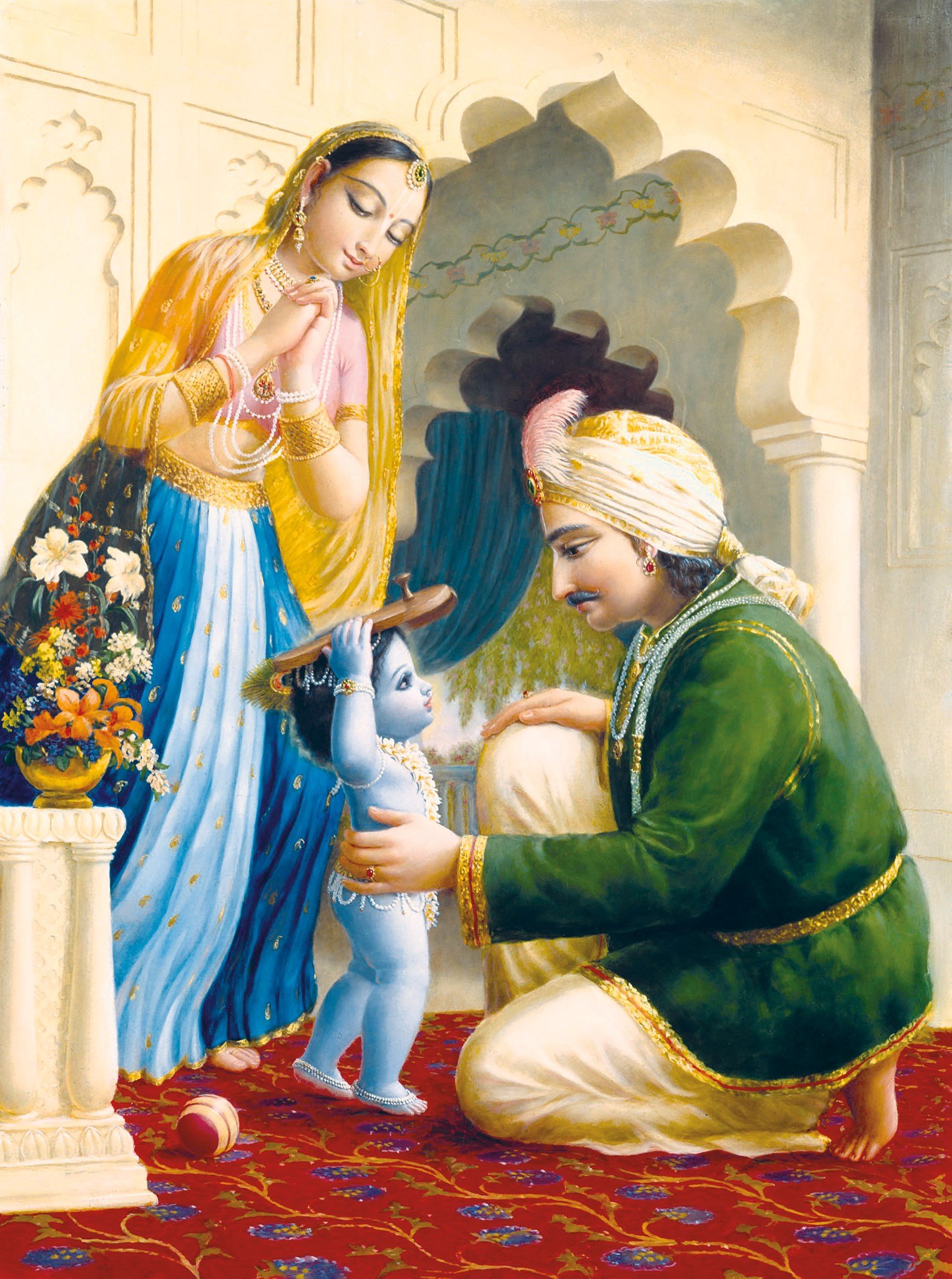 Does Krishna remember us?

Does He remember His mother and His friends and well-wishers?

Does He remember the cowherds and their village of Vraja, of which He is the master?

Does He remember the cows, Vrindavan Forest and Govardhana Hill?

Will Govinda (The Cowherd, Krishna) return even once to see His family?

If He ever does, we may then glance upon His beautiful face, with its beautiful eyes and smile?

We were saved from the forest fire, the wind and rain, the bull and serpent demons — from all such insurmountable, deadly dangers — by that very great soul, Krishna.

As we remember the wonderful deeds Krishna performed, His playful sidelong glances, His smiles and His words, O Uddhava, we forget all our material engagements.

Being composed of pure consciousness, or knowledge, the soul is distinct from everything material and is uninvolved in the entanglements of the modes of nature.

We can perceive the soul through the three functions of material nature known as wakefulness, sleep and deep sleep.

As a person just arisen from sleep may continue to meditate on a dream even though it is illusory, so by the agency of the mind one meditates on the sense objects, which the senses can then obtain. Therefore one should become fully alert and bring the mind under control.

In this world no one has any permanent relationship with anyone else, O King.
We cannot stay forever even with our own body, what to speak of our wife, children and the rest.

Every creature is born alone and dies alone, and alone one experiences the just rewards of his good and evil deeds.

The Supreme Lord said: My dear friend, I have taken thousands of births, lived thousands of lives and accepted thousands of names. In fact My births, activities and names are limitless, and thus even I cannot count them

After many lifetimes someone might count the dust particles on the earth, but no one can ever finish counting My Glories, Qualities, Activities, Names and Births.

O King, the greatest sages enumerate My births and activities, which take place throughout the three phases of time, but never do they reach the end of them. 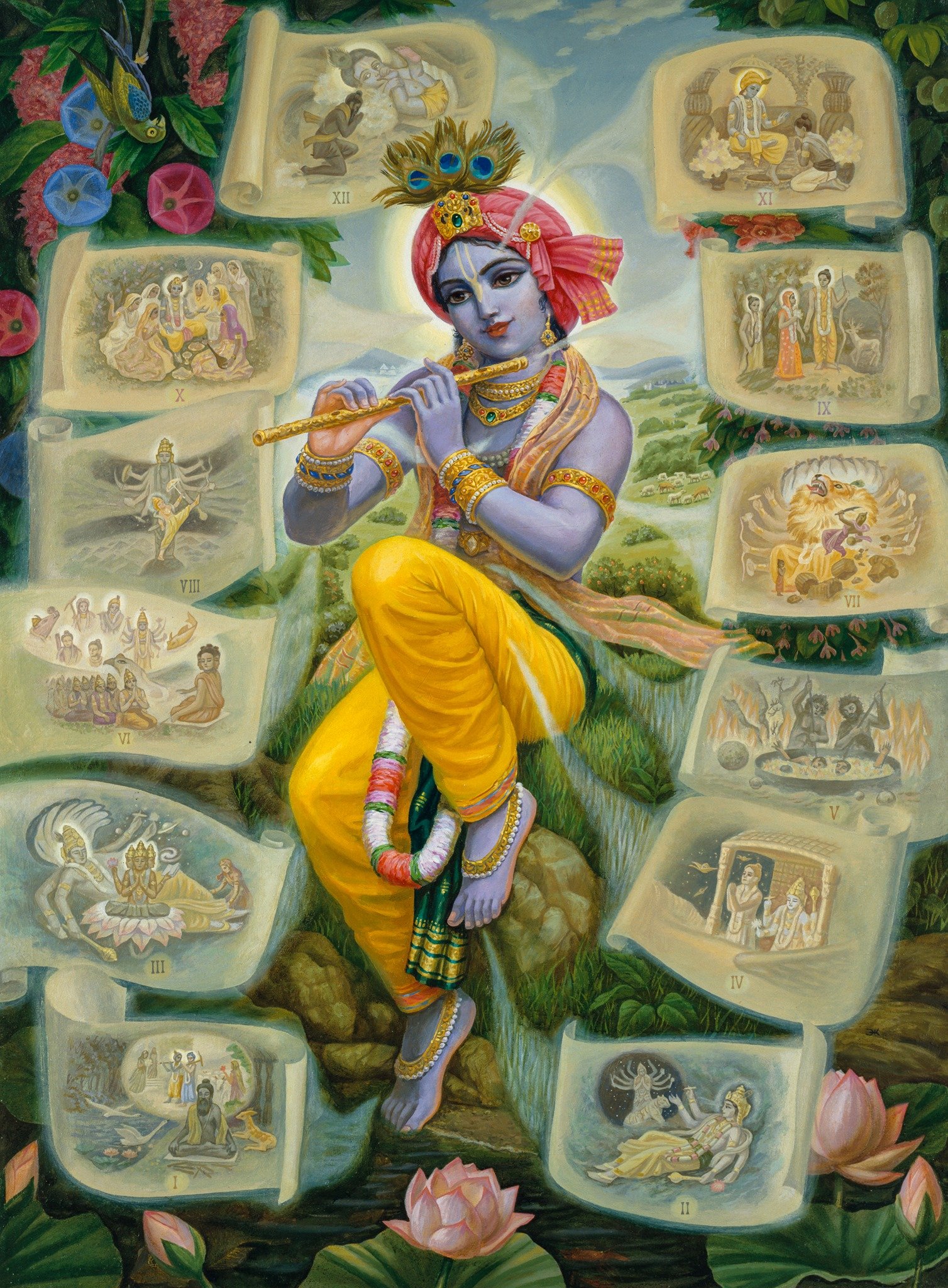 Seeing that the Size of all the human beings, animals, trees and plants was severely reduced, and thus realizing that the Kali Yuga was at hand, Mucukunda left for the north.

– Srimad Bhagavatam 10.52.2 (Humans and Animals were Bigger Size in Previous Yugas, but they became small in Kali Yuga)

When a Brahmana is satisfied with whatever comes his way and does not fall away from his religious duties, those very Religious Principles become his Kamadhenu (desire fulfilling cow), fulfilling all his wishes.

What can the tolerant not bear?
What will the wicked not do?
What will the generous not give in charity?
And who will those of equal vision see as an outsider?

Anyone who fails to immediately leave the place where he hears criticism of The Supreme Lord or The Lord’s Faithful Devotee will certainly fall down, bereft of his pious credit.

An Actual Head is one that bows down to The Lord in His Manifestations,
Real Eyes are those that see only The Lord, and actual Limbs are those which regularly honor the water that has bathed the Lord’s Feet.

Mere bodies of water are not the real sacred places of pilgrimage, nor are mere images and stone the true worshipable deities. These purify one only after a long time, but Sadhus (Sages) purify one immediately after being seen.

Obsession of Indians with fair skin is not indigenous perception

Hindutva and the Hindu Rashtra