Sri Lanka: Institutions serve the leaders, not “The Law” 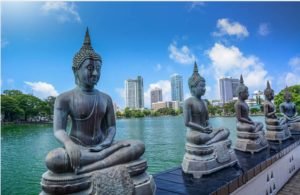 H. G Wells in his 1896 science fiction “The Island of Doctor Moreau”
presents an example of a law masquerading as “The Law”. The Faustian
Doctor Moreau performs cruel surgeries and contortions on animals to
make them look, walk and talk like humans. To make them obedient to
himself, he gives them a set of rules to recite but calls it “The
Law”. Every man-made process going around as “The Law” needs a priest
and the priest in this grotesque story is another animal transformed
by Doctor Moreau and named “Sayer of the Law”. It makes all modified
creatures recite a litany that essentially prohibits animal behaviour.
It repeatedly makes them assert, “Are we not men?”  Yet, the animals
keep reverting to animal behaviour and are given punishment and more
surgeries. For them “The Law” was that they were animals, walking on
all fours, sucking their liquids, eating flesh and fish. Yet, the
process created by Doctor Moreau legitimises acting against “The Law”
and enforces behaving like humans. Ultimately, there is a breakdown
and a half-finished puma woman kills Doctor Moreau.

Can we relate this story with what happened in Sri Lanka on July 9,
2022 when a huge mob swarmed over the presidential palace and the
armed forces had to help the president sneak out by some back door?
Then the mob burnt down the private home of the prime minister in
spite of the police and armed forces using tear gas and firing in the
air. Both the president and the prime minister had been elected by a
process and could not be delegitimised by appealing to that very
process, irrespective of their failures, negligence, incompetence and
worse. Had people gone to courts, they would have been asked whether
these leaders had violated any prescribed process. The parliament, the
courts, and the leaders had given the people a set of rules that
masqueraded as “The Law”. People suffered pain and misery, deprivation
and hunger. Children could not go to school, as there was no fuel for
the buses. Factories could not run, as there was no electricity.
Mothers could not cook even when they could lay their hands on some
food, as there was no fuel.

Sri Lanka was originally called Sinhaladvipa. It was a tongue twister
for the Europeans who descended on this region looking for spices.
They preferred Serendib, the simplified Arabic word for it that led to
the word serendipity, meaning the luck or good fortune of finding
something good accidentally. During his visits to this piece of heaven
on the earth, the present writer did find the island true to that
word, where one finds ubiquitous beauty and peace. Yet, in the last
few months, it oozed tears more than serendipity. People, in this
teardrop-shaped nation, screamed as the animals on Doctor Moreau’s
island did under the blade of Doctor Moreau. Their bodies and souls were being twisted under the cruel knife of corruption of the
Rajapaksha clan during the last two decades that had devoured the
country’s economy from within. These leaders borrowed in the name of
the nation, lined their nests at home and abroad and when the
creditors came calling, handed over to them pieces of the nation, like
the Hambantota port ceded to the Chinese.

All such kleptocrats have their day of reckoning. They are swept away
by the process, if the process has still left in it that vestige of
democracy called “free and fair elections”. In the alternative, they
are washed away by the human tide as happened in Colombo on July 9.
This had happened to Ferdinand Marcos of the Philippines, to Ceausescu
of Romania, to the Czars in Russia, to the last emperor in China.
Sadly, in many cases, a new Doctor Moreau comes on the scene with his
own knife and makes them recite his set of rules as “The Law”. Did
“The Law” ever exist or have human beings always lived under a set of
man-made rules, nourishing the leaders who thrive under the legitimacy
provided by those rules? The Ṛgveda points to Ṛta, the eternal cosmic
order and the principle that sustains it. It was not created or willed
by any beings or even by any gods and existed before all of them, they
all being powerless to even alter it. Let alone rulers, even the gods
had duties under Ṛta. Usha, the goddess of dawn, was ṛtāvarī, the most
honoured Ṛta, as the symbol of an inevitable new beginning after every
spell of darkness. She participates in the cosmic order and is the
enemy of the chaotic forces.

The Indians were not unique in visualising “The Law” that has to be
followed by the people, their rulers, the priests and their gods.
Egyptian pharaohs obeyed Maat and had the duty to uphold it, to bring
about order in place of disorder. Egyptian civilization lasted
millennia and so did Indian civilization, the latter outlasting even
the former. Maat represented truth, justice and the cosmic order.
India’s motto, borrowed from the Mundakopnishad, “Satyameva Jayate,
(nānritam)”, truth alone triumphs, not un-Ṛita, mirrors the Egyptian
description. Somewhere on the road to power, the rulers lose sight of
Ṛta or Maat. Drunk on power, they believe that through a process,
their “Sayers of The Law” can coerce the masses to recite their rules
as “The Law”. The animals on Doctor Moreau’s island had accepted their
pain for a long time because the fake Law said so. Yet, they kept
reverting to “The Law”, their real nature as animals. As social
animals, humans’ nature, their real Law, is to create order out of
disorder. Any leader, who, backed by the institutions and the process,
thinks that he can violate the Ṛta for long, does so at his own peril
but in the process causes avoidable pain and misery to his countrymen
too.

Prince Qureshi pretended to be Monu Gupta in order to target a Hindu girl, raped her when the girl found his true identity.