The civilians were religious volunteers, or kar sevaks, assembled near the Ram Janmabhoomi site at Ayodhya.

In September 1990 the Vishwa Hindu Parishad (VHP), the Rashtriya Swayamsevak Sangh (RSS) and the Bhartiya Janata Party campaigned for a new Ram Temple to be built at the Ram Janmabhoomi site. The situation became volatile, with L. K. Advani conducting rath yatra and the VHP mobilizing people to the site. The state government, under Mulayam Singh Yadav, promised protection and a complete lockdown of the site and city.

Yadav reassured the public: “No bird would be able to fly into Ayodhya”.

Volunteers, or kar sevaks first assembled in Ayodhya, at the behest of L. K. Advani of the BJP and Ashok Singhal of the VHP, on 21 October 1990.

Police barred all bus and train services to Ayodhya. Most kar sevaks reached Ayodhya by foot; some swam across the Sarayu river. The police also barricaded the 1.5 km-long climb to the disputed structure and imposed a curfew. According to the investigatory Liberhan Commission report, issued after the event:

At around 10am, a large group of kar sevaks headed towards the site, led by Vamadev, Mahant Nratyagopal Das, and Ashok Singhal of the VHP. Ashok Singhal was wounded on the head by a police baton. This altercation led to a mob frenzy and open confrontation between civilians and policemen.

At around 11am, a Hindu holyman or sadhu managed to gain control of an Armed Constabulary bus in which the police were holding detainees. The sadhu drove the bus right through the barricades, clearing a way for the others to follow on foot. The security forces were caught off guard and were forced to chase about 5,000 kar sevaks, who stormed through the heavily guarded site.

According to eyewitnesses the Kothari brothers mounted a saffron flag atop the Babri Masjid.

On the orders of Mulayam Singh Yadav security personnel fired on the crowd and chased kar sevaks across the area. Many people died from head wounds. There was a stampede at the Saryu Bridge, which killed a number of people.

Hindu groups took a day of rest on 1 November.

Assembled kar sevaks offered prayers at Ramlila on the morning of 2 November and then proceeded to Babri Masjid. Members of the crowd used the strategy of touching security personnel’s feet, which made them withdraw a step. This worked for a while, and the procession continued. However, the police took firm action by using tear gas and baton charges to disperse the crowd.

Nevertheless, some contingents of kar sevaks reached and partially damaged the mosque.

In response the police opened fire for the second time in 72 hours, and chased kar sevaks through the alleys around Hanumangarhi. In one place, later named Shaheed Gali or Martyr’s Alley, police killed many kar sevaks – this included the Kothari Brothers, who were allegedly dragged out of a house.

Some Indians have accused the police of disposing of many dead bodies, either by cremating them at unknown places or by dumping them into the Saryu River in sacks.

News of the shootings was mostly suppressed from the Indian media, but some local and international media outlets mentioned them.

The firing incident had a major impact on Uttar Pradesh and on Indian national politics.

The Chief Minister of Uttar Pradesh was given the sobriquet ‘MULLA’ Mulayam Singh for his pro-muslim stance during the incident. He lost the 1991 election to the Bhartiya Janata Party.

26 years later he described his decision to fire on the crowd in Ayodhya as “painful yet necessary.

Hindu groups arranged a memorial meeting for the dead Karsevaks on April 4, 1991 at the Boat Club, New Delhi, which attracted a large audience.

They also launched a nationwide awareness program displaying the Asthi Kalash (funeral urns) of those who died in the firing incident.

In the following years, these organizations and their prominent leaders received both political and moral endorsement.

ABOVE INCIDENT HAS BEEN EXPLAINED IN MANY PRINT MEDIA BUT WHAT MATTERS MOST IS OPINION.

What we want to say that karsevaks died because of police firings on orders of Mulayam singh yadav.

He might would have offered condolence afterwards but what he rather said is that he don’t regret it just to appease his Muslim voter base.

The day we change that and reverse the situation our country will get a another engine of growth.

The Kothari brothers(Ram & Sharad) were two RSS workers who were born in Kolkata. In 1990, they went to Ayodhya from Kolkata for kar seva . They walked many miles as the trains and bus service to Ayodhya were stopped and police was arresting and deporting people trying to enter it.

On 30 Oct 1990 morning, the duo reached Ayodhya. The agitation was in full swing there and it is said that the brothers climbed main Babri Masjid building and mounted Saffron flag atop it. On Mulayam Singh yadav’s order the police started firing after tear gas and lathi charge failed to douse kar sevak’s spirit. The brothers either got away on their own or were taken by police to Faizabad and released there. In either case, they returned to Ayodhya by 2 nov 1990 to complete their work. The brothers were stranded in an alley near the ram janmabhoomi site when police firing begun again. First the younger brother was shot dead. The elder brother on seeing younger brother falling, rushed to rescue but was shot dead too. Both died on the spot. Kothari Sons dead in Ayodhya police firing, mother awaits verdict

In memory of kar sevaks who died, 2 November is celebrated as ‘Shaurya diwas’ (Valour Day) by Hindu groups. In 2015, Kothari brothers’s sister Purnima Kothari arranged a program to commemorate their 25th death anniversary but permission was denied by Akhilesh government. VHP to bring 1990 firing incident back from the dead There is charity organisation run by RSS family named ‘Kothari Brothers Memorial Trust’ which conducts blood donation and other similar social work. Kothari bandhu seva trust

In a way, Kothari family was lucky that at least they got to have closure. Many people who were killed in the firing never received the last rites. Their dead bodies were thrown in Saryu river with heavy sacks tied to them. 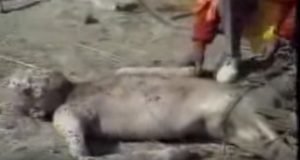 The Syro Malabar Church : Which is India’s biggest corporate House?

ISIS ARRIVAL IN INDIA AND ANALYSIS OF 26TH UN REPORT