Let’s talk about persecutions, the contemporary world turned a blind eye upon due to several socio-politico-economic reasons. Let’s remember the horrific persecution faced by the Romas which the world comfortably erased from the history with such an ease that their mistreatment and fate in Halocaust are not even remembered. Let’s talk about the lost children of Bharat. 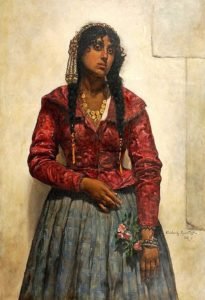 The Roma people are of Northern Bhartiya origin. In Europe, Romas are visibly brown, which is what led to a history of persecution, that started off with 500 years of slavery and led to the Holocaust. All the way through the 19th century, the Roma were sold as slaves, with the price calculated per kg of ‘meat’. This is a poster for a slave auction in Romania. 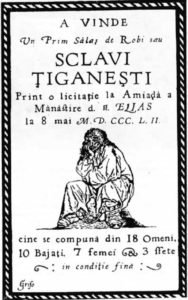 The term ‘tsigan’, generically used in Europe, comes from from medieval Greek tsigganos, and means untouchable. The English term ‘gypsy’ originated from the misunderstanding that the Roma came from Egypt, an assumption made due to brown skin. Its historical use has been extremely pejorative, and often associated with accusations of crime. It has also been used as a means of racial othering and exoticising. For example: ‘The true gipsies are readily distinguished by their..jet-black hair, black sparkling eyes, Indian complexions, and their genuine Oriental language.’ (1838). Notice the generic ‘Oriental’, etc. But gradually the term took on a life its own. Because the Roma were originally nomadic, it became associated with travelling.

Today the British media use traveller/gypsy/Roma interchangeably, but these are different groups despite sharing a history of nomadism, and facing very similar challenges, difficulties & persecution. Today the Roma are no longer nomadic. And ‘gypsy’, despite it now being used to refer to all nomadic groups, remains originally a term used to other a group because of their skin colour. That’s why it’s a slur. It’s particularly problematic when used by white people to describe themselves as ‘free-spirited’ and ‘boho’. If a Roma describes themselves as ‘gypsy’ or ‘tsigan’ that’s not a pass for other groups to use it. We have a right to reclaim terms, as many other marginalised groups have done before.

Targeted during the Holocaust, as many as 1.5 million by some estimates Roma perished. But this is not widely recognised or spoken about. Because of the confusion regarding the term ‘gypsy’, many, like Whoopi Goldberg, assume it was white-on-white violence and erase the continus history of racism the Roma have faced as poc in Europe. And when I say continuous, I mean continuing to this day.

Here are some examples: forced sterilisation of Roma women in Slovakia until 2004. In Greece last year, an 8-year-old Roma girl named Olga was crushed to death by revolving doors as people watched indifferently and nobody intervened. In 2021, a Romani man in the Czech Republic was killed by a police kneeling on his neck and compressing it.

In 2013, Gilles Bourdouleix, member of National Assembly, France, said ‘Maybe Hitler didn’t kill enough of them.’ Riccardo De Corato, deputy vice mayor of Milan, Italy, in 2010: ‘These are dark-skinned people, not Europeans like you and me’.

Zsolt Bayer, co-founder of the Fidesz Party, Hungary, 2013: “A significant part of the Roma are unfit for coexistence. They are not fit to live among people. These Roma are animals, and they behave like animals. When they meet with resistance, they commit murder.They are incapable of human communication. Inarticulate sounds pour out of their bestial skulls. At the same time, these Gypsies understand how to exploit the ‘achievements’ of the idiotic Western world. But one must retaliate rather than tolerate.These animals shouldn’t be allowed to exist. In no way. That needs to be solved — immediately and regardless of the method.”

So, finally, when contemporary discourse in the EU questions whether we have the right to exist, calls us animals, and encourages our extermination, remind me how the Jimmy Carr joke is funny?

Ashoka Was a Cruel Imperialist Emperor