The Russian Embassy in Bharat went up to give a tight slap to the left leaning newspaper “The Hindu” which turned it’s cheeks red.

The newspaper “The Hindu” recently put up a tweet where it went up to ask a question to the netizens that “Which part of Ukraine is already annexed by Russia in a previous invasion in 2014”. The question also provided 4 options namely- Crimea, Kharkiv, Lviv and Bakhmut. 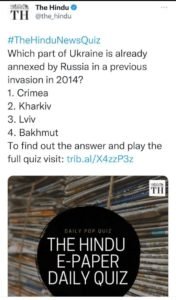 Taking a cognizance of the question put by the newspaper, The Russian Embassy in Bharat lashed out at the daily newspaper. The Russian Embassy in Bharat wrote a sarcastically tweet to target “The Hindu”. It wrote “Dear @the_hindu, tell us more about “previous invasion”. We haven’t heard of that”. This tweet of the Russian embassy went viral and drew criticism for the daily newspaper “The Hindu” for spoiling the relationship between Bharat and Russia. Netizens also targeted the newspaper for being careless in following Geopolitics. 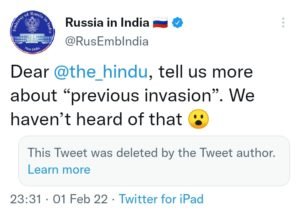 How Will SriLanka benefit if it merges with India?