The perpetrators could be Leftists, Muslims, or both. British Leftists such as Nick Lowles of Hope Not Hate for years smeared those who called attention to Muslim rape gang activity as “racist,” and painted a target on the back of Robinson and others in doing so. Meanwhile, British authorities cowered in fear of being similarly tarred as “racist” and “Islamophobic,” and let thousands of British girls be victimized by the Muslim rape gangs. Many Muslims hate Robinson for calling attention to Islamic doctrines they would prefer Infidels didn’t know, and Leftists hate Robinson for calling attention to the hypocrisy and evil of their open-borders mass migration and multiculturalism project. Either one could have done this. 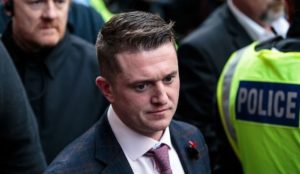 British journalist and free speech activist Tommy Robinson’s car was firebombed on Sunday, one day after he released a trailer for his upcoming documentary exposing Muslim grooming gangs.

Robinson’s new documentary, “The Rape of Britain,” will expose the names and faces of those involved with the gangs of migrants raping young British girls in Telford and other towns.

In the promo, one of the alleged survivors names Gulfraz Khan as the leader. Robinson also states that there are five women in Telford alone that have been killed by the gang.

Persecution of Hindus in Pakistan continues, dead body of a Hindu youth was found hanging by the neck with a tree, was tortured before hanging

Are our media work on humanitarian Ground for Abdul Rashid Shora?