If one screams “Shivaji Maharaj Ki” there would be millions of his fan who would scream in response as “Jai”. Now if you ask them why do you respect Shivaji Maharaj plenty of them would hardly know the great deeds Shivaji Maharaj accomplished. If we think and want to prove that Shivaji Maharaj was far far ahead of his times and a great king of his times then we need to analyse the achievements he achieved during his times. Here are few examples which will throw light on how ‘Clever’ Shivaji Maharaj was. I would expect you know some background about these incidences as it would be almost impossible to explain each incident in detail.

Similar to this advocate ‘Gopinath Bokil’ had dialog with Afzal Khan twice and convinced him to pay a visit to Shivaji Maharaj in ‘Jawali’ region. When Afzal Khan moved his camp from ‘Vai’ to ‘Jawali’ Shivaji Mahraj ordered his troops to seal all exits. Even in meeting Afzal Khan was so overconfident with is plans and mainly with his own muscle strength that he took only ‘Bada Sayyad’ as one security guard with him whereas it was allowed to bring two security guards as per temrs. Shivaji Maharaj brought ‘Sambhaji Kawaji’ who was as strong as Afzal Khan and ‘Jiwa Mahala’ who was match to ‘Bada Sayyad’ this again shows Shivaji Maharaj’s cleverness. Shivaji Maharaj was wearing ‘Kevlar’ (Chilkhat) whereas Afzal Khan was not. With this whole master plan everyone know the outcome. Shivaji Maharaj not only executed Afzalkhan but by sealing all exits Maharaj also killed all of Afzal Khan’s troops as well. This shows how Shivaji Maharaj kept his nerves not only when Afzal destroyed Tulja Bhavani temple, not only when he knew he is the same person who murdered my own brother, not only when he knew that he is the same person who captured and insulted Shahaji Raje but also betrayed Khan by posing himself as Coward. Afzalkhan who single handedly rose Aidshahi to new heights, whom even Aurangzeb also feared was executed by Shivaji Maharaj with all his wits and patience. Also Shivaji Maharaj brought his enemy to a region which was best known to him but not to his enemy. (Afzalkhan knew the region very well as he was ‘Subedar’ of ‘Vai’ region in past which was near to ‘Jawali’ but not his force was aware of). 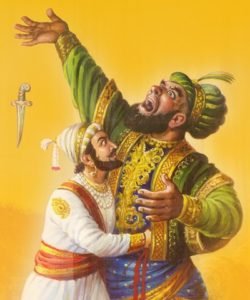 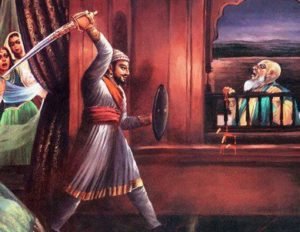 Both the Sacks of Surat:

Shivaji Maharaj was one of those kings who used his Spies very well. You can say that Shivaji Maharaj had exact ‘Blueprint’ of Surat before sacking it. The first Sack of Surat was exactly after attack of Shastakhan as he looted ‘Swarajy’ for three long years. Shivaji Maharaj with the help of his spies knew exactly who had great wealth in Surat. This sack was far different from any other invasions and none of the soldiers (Mavalas) of Shivaji Maharaj was allowed to sack any common man. They only sacked Mughal Subedars and lenders. This not only shows Shivaji Maharaj’s great planning, his wits, utilizing all his resources like spies very well but also shows how ethical he was when it came to even Sacking mughal region. In first sack Shivaji Maharaj took one extra horse with every horseman in order bring back the ‘loot’ as quickly as possible expecting Mughal chase, but no one chased. So in next Sack Maharaj took bullocks with him so that he can carry more ‘loot’ and anyway no one would chase him so no need to be in hurry. 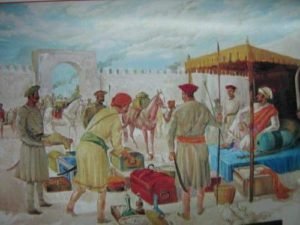 Aurangzeb murdered his own brother ‘Darah Shikoh’ during his race for Mughal throne. He presented sliced head of ‘Darah’ to his father ‘Shah-jahan’ as latter favored ‘Darah’ over him. Aurangzeb also murdered his another brother Murad Baksh to whom he promised that after killing ‘Darah’ he would share Mughal empire with Murad. After his both brothers he slowly killed his father through massage guy. Aurangzeb also imprisoned his son Muhammad Sultan when he was skeptical about his actions. His son died in prison. So here we have a Badshah who murdered his two brothers, his father and son as well. Shivaji Maharaj after ‘treaty of Purandar’ was asked to pay visit to Aurangzeb in Agra. Knowing this history Shivaji Maharaj doubted his safetly. Mirzs Raja Jaisingh promised Maharaj that no harm would occur to Shivaji Maharaj during his visit to Agra. He also instructed his son Ramsingh about the same. During his trip Aurangzeb never missed any opportunity to insult Shivaji Maharaj. Shivaji Maharaj when reached Agra was then taken to ‘Diwane-aam’ not to ‘Diwane Khas’. He was then made to stand behind ‘panch hazzari’ Chieftains (Chieftains who had royal army of 5000). This further added to Shivaji Maharaj’s anger he started having furious dialog with Ramsingh. Ramsingh tried convincing Maharaj but furious Maharaj lift the court showing his back to Mughal throne after saying few nasty words to Aurangzeb. Now everyone suggested Aurangzeb to punish and execute Shivaji Maharaj and it was quite easy for Aurangzeb. Aurangzeb kept Shivaji Maharaj in house arrest. Shivaji Maharaj planned his complete plan. He first pretended to be sick and later requested Aurangzeb to let his 1500 men back to Maharashtra. Aurangzeb thinking this would make Shivaji alone approved this happily. With this step Shivaji Maharaj rescued all his people except few who were needed for further planning. Then he requested Aurangzeb that he doesn’t want to participate in politics anymore and want spend rest of his life as hermit in ‘Kashi’. Aurangzeb being cautious this time replied it is a good thought but spend your life in fort of Agra then. Shivaji Maharaj came to know this is final warning as no one returns alive from imprisonment of Agra fort. So again Shivaji Maharaj requested Aurangzeb to allow him to donate sweets to poors in order to come out of all sins he has committed during these last few years. This was approved by Aurangzeb. Later from one of these Sweet boxes Shivaji Maharaj fled away. Again his spies already planned his complete trip to ‘Rajgad’ his then capital. Till date no one knows which root Shivaji Maharaj has taken. Historians are still drabting when did Shivaji arrived back to ‘Rajgad’ few say in 30 days few claim in 3 months. While his trip back home he left Sambhaji in Kashi at a ‘Brahmin’s’ home. Anticipating Mughals would be chasing a guy carrying his young son along with him. Shivaji Maharaj after reaching Rajgad even carried out all post death rituals of his son Sambhaji declaring that he lost his son in this trip. This stopped Mughal chase for Sambhaji Maharaj as well. It is Shivaji Maharaj’s wits with which he escaped from the clutches of a person who murdered brutally his brothers, father and son. His impeccable planning and going ahead of time and carrying out post death rituals of his alive son as well. This shows the high level of brilliance of this great leader. 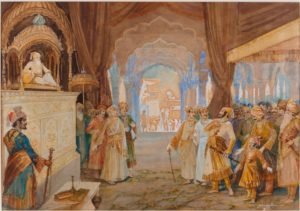 There could be many more examples but I think I should stop here. With these incidences I think you must have got some idea about the true brilliance of this great personality. And now I can truly say ‘Shivaji Maharaj ki Jai’.

This whole excerpt is not based on my imagination but I used following references to put this true historical incidences in front of you.

Alexander in Afghanistan – The Unknown Disaster