Which is more tough to find, Gauahar Khan’s acting career or logic in her tweets?.

A new question came popping up into the heads of neitzens after going through the recent tweet of long forgotten actress Gauahar Khan that which is more tough to find, Gauahar Khan’s acting career or logic in her tweets?

Asha Jadeja Motwani wrote a tweet where she spoke for bringing Uniform Civil Code in Bharat. Asha Jadeja Motwani wrote ” Outside world does’nt know that India still has seperate family laws for Hindus & Muslims. Hindus have to abide by secular code. Muslims can have four wives & ban education for their wives and daughters in name of Sharia. #UniformCivilCode has to apply to all Indians.”

In response of this tweet of Asha Jadeja Motwani, long forgotten actress Gauahar Khan came up with a senseless tweet. She tweeted “Hey loser ! I’m a Muslim , and no body can ban us from having our rights , india is secular, it’s a democracy, not a dictatorship like u would desire ! So stay put in the comfort of your American status , n stop inciting hate in my country !”. 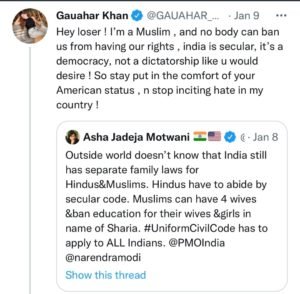 The fatawa-e-Alamgiri (base of sharia) in India, supports sex slavery & halala, which are pure evil. The flop actress needs to clear whether she stands in support of these two. It needs to be noted that Gauahar Khan also went up to stand against Citizenship Amendment Act which had nothing to do with indian muslims living here.

How the son of a diamond factory worker in Gujarat founded a $11 billion crypto startup called Polygon.