So called ‘journalist’ Rohini Singh has now packed herself in a box of troubles after she tried to spread rumours about BJP leader Bhadohi Ravindra Nath Tripathi, that he is breaking away from the Bhartiya Janta Party.

Now BJP MLA Bhadohi Ravindra Nath Tripathi has requested the Uttar Pradesh police of lodging a case against journalist Rohini Singh under IT act for spreading rumours against him, propagating a conspiracy to defame him and also for causing mental stress to him. BJP MLA Bhadohi Ravindra Nath took to Twitter to write “It is a request to Uttar Pradesh police to book a case under IT act and initiate action against @rohini_sgh for conspiring to defame me, spreading falsehoods and causing me mental agony,”. He also spoke to media personnels and said “I am in BJP and dedicated to it. I have not written any letter; going to register an FIR against that person who has done it. 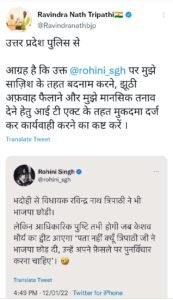 Rohini Singh of “The Wire” earlier wrote a tweet in persuit of spreading fake news about BJP MLA Bhadohi Ravindra Nath Tripathi to be the next MLA to break away from the party. She wrote “Bhadohi MLA Ravindra Nath Tripathi also left the BJP. However, the former announcement will be made when Keshav Maurya tweets: ‘I don’t know why he left the BJP. He should reconsider his decision’,. Later she went on to delete her tweet. 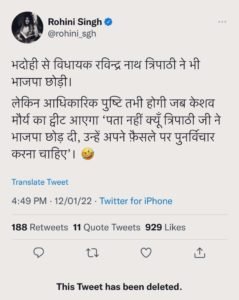