Pathaan which features a 54 old male actor as its lead is scheduled to release in the theaters on January 25. The trailer got released today and people learnt that the male lead is some undercover agent. The trailer begins with a voiceover by Dimple Kapadia explaining a private terror group’s mission against India, spearheaded by John Abraham. To fight him, there is Pathaan, who has to end his ‘vanvaas’ (exile). 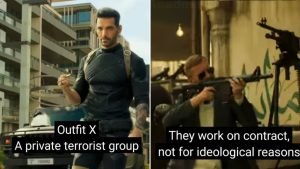 As the trailer got released, the militias of Taliban also watched it out of excitement. But they were immediately upset after learning from the Pathaan trailer that a terror organisation works on contract and not for any religious ideology.

Even one of the fighter on condition of anonymity went on to say that they felt cheated and they have been taken for a ride. On being asked repeatedly they said, they had believed that they are fighting for some Dar-ul-Islam and against Dar-ul-Harb. Hence, they never knew about this contract aspect. Thus, they are planning to organise a massive strike in Taliban Headquarters, soon.

Though our correspondent no. 786 reached out to the Talibani Spokesperson, but since he was in an Ola cab, he refused to comment. He said his mobile network is better whenever he takes an Uber.

Putin’s Reasons for all Seasons