The world has seen in past few days how desperately Elon Musk wanted Twitter after he became the largest shareholder by acquiring 9.2% stake. After days of negotiation with the board, Musk was successful to buy Twitter at $44 billion. From now onwards, Twitter is a private company with all the control in the hands of Elon Musk.

It all started when he posted on Twitter, where he has more than 80 million followers, with a poll asking his audience:

“Freedom of expression is essential for democracy to work. Do you believe that Twitter strictly adheres to this principle?”. He then warned that “the consequences of the outcome of this poll would be very important” and urged people to vote conscientiously.

70% of the votes were for the “no” option, in the sense that Twitter is not a network that really cares about freedom of expression.

Many believed that the billionaire would create his own social network, but on March 14, Musk bought a 9.2% stake in Twitter. 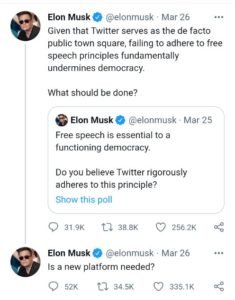 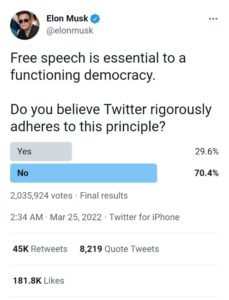 The public announcement about the purchase of the shares and the supporting documents only came out later and with that the shares of Twitter soared more than 25% after the announcement.

Employees had reacted angrily to Elon Musk’s $44 billion bid to buy Twitter, accusing the world’s richest man of bigotry and fearing job losses after the deal closes. Employees in the ‘impromptu’ all-hands meeting peppered management with heated questions, including CEO Parag Agrawal, who was characterized as fatigued and irritable.

A Twitter spokesman declined to comment. Musk was portrayed as anti-gay and anti-transgender by one employee at the meeting, who expressed concern that his ownership might stymie efforts to recruit new personnel. ‘What should we tell the LGTBQ community when they ask why they should come work at Twitter after we recently sold ourselves to an open homophobe and transphobe at a recruitment conference we’re planning to attend?’ The criticism of Musk may have been referring to his prior mockery of the inclusion of pronouns in Twitter bios.

The question here is—Why was he so interested to buy this microblogging platform despite of having successful ventures like Tesla, SpaceX & Neuralink?

The reasons are clearly evident. Elon wants Twitter to be a platform that promotes free speech as he has already portrayed himself, on many occasions, as a proponent of free speech. His recent tweets establish this notion. Not only this, he’s among the top 10 most followed individuals out there. Elon’s tweets have potential to fluctuate the market anyday as he’s quite interested in cryptocurrency & digital assets. Using this technique, he has amassed a billion dollars of wealth. A single tweet on bitcoin(BTC) exponentially raised its value in few hours. This is why USA’s government has put some restrictions on Elon’s financial tweets. Therefore, he might be free from all these restrictions now.

Another reason he cites is about algorithms. He is in favour of making algorithms open-source so that any user can see how the platform works or to find loopholes. Removing spams & bots are also among his priorities. Twitter has failed earlier in all these aspects hence Elon promised to work on them.

In my opinion, this takeover will make him the most powerful person on Earth as well. This is possible because nearly every influential personality & governments in the world are active with their respective handles. Whatever are the promises, history is the guiding light. As the saying goes, “power corrupts and absolute power corrupts absolutely”, the concentration of power vested in an individual earlier has proved to be a bane for the world. Having said that, Elon is a visionary leader who aspires to race ahead even with the future for the sake of humanity. Yet, who knows?

It has been really funny to see how the left-liberal low-IQ cabal has been ranting over a “rich guy” running Twitter. Common, its not like the others were even remotely middle class. But unlike them, he’s not toe to toe with a political party.

Wednesday seemed to start out like a field day for netizens : The richest man in the world walks in carrying a sink . . . For Elon Musk, the punch line was appropriately delivered on Twitter, the company he’s taking over Friday at an inflated price. Calling himself “Chief Twit,” Musk posted the video with the caption “Entering Twitter HQ — let that sink in!” Of course, it was a joke — a colossal joke. The question is whom the joke was on.

For the Musk-phobic, it was as funny as a drive-by shooting. CNN analyst Juliette Kayyem denounced Musk’s taunt as “fundamentally cruel.” After all, when Musk was first reported to be buying the company, employees were so traumatized that leadership had to offer emotional support just to “get through the week.”

The reason is less the fear of Musk bringing bathroom fixture than free speech into San Francisco headquarters. Twitter has created one of the largest censorship systems in world history — a system widely condemned for a pattern of political bias and viewpoint intolerance.

Outgoing CEO Parag Agrawal is unabashedly hostile to traditional views of free speech. Soon after he took over, he pledged to regulate content and said the company would “focus less on thinking about free speech” because “speech is easy on the Internet. Most people can speak. Where our role is particularly emphasized is who can be heard.”

For employees who are true believers of this censorship scheme, the joke no doubt feels like it’s on them. The censorship skill set may not be quite as much in demand in a Musk-owned firm. While Facebook, Google and other companies are still committed to corporate censorship, Musk has pledged to restore free speech principles to Twitter.

But the joke may still be on Musk if he yields to Twitter’s corporate culture or the mainstream media’s unrelenting pressure. Democratic leaders like Hillary Clinton have turned from private censorship to good old-fashioned state censorship.

Clinton has called on foreign governments to step in and pass laws that would force Twitter to continue to censor opposing views. New Zealand Prime Minister Jacinda Ardern recently repeated this call for global censorship at the United Nations to the applause of diplomats and media alike.

Musk may have to yield to such domestic laws, but he can use his platform to inform citizens of those countries they are being censored and controlled in what they are allowed to read.

The most important thing in America is for Musk to hit the ground running at Twitter.

First, he needs to order the preservation of all records. There are well-supported examples of biased censorship, including the burying of The Post’s Hunter Biden laptop story before the election. There are also allegations of back-channel communications from the government to manage a type of censorship-by-surrogate system to evade the First Amendment.

Second, Musk should focus on the First Amendment as a model for Twitter’s content-management policy. It has become a mantra on the left that free-speech objections to social-media censorship are meritless because the First Amendment does not apply to private corporations.

This is a knowingly cynical and senseless argument. The First Amendment has never been the sole and exclusive measure of free speech. It concerns the greatest threat to free speech at the time of the founding. But corporate censorship on communication platforms is an equal, if not greater, threat today to free-speech values.

Musk could call these anti-free-speech advocates’ bluff. Former President Barack Obama flogged this false line at Stanford in April. He started by declaring himself “pretty close to a First Amendment absolutist.” He then called for the censorship of anything he considered “disinformation,” including “lies, conspiracy theories, junk science, quackery, racist tracts and misogynist screeds.”

Like many others on the left, Obama claims to be a free-speech champion but narrowly confines such fealty to government censorship. He emphasized, “The First Amendment is a check on the power of the state. It doesn’t apply to private companies like Facebook or Twitter.”

While the First Amendment does not bind private corporations, there is nothing preventing one — like Twitter — voluntarily assuming such protections for free speech. Even with some adjustments for a private forum, what I call the First Amendment Option would create a default in favor of free speech that doesn’t exist on these platforms.

There’d be narrow exceptions for threatening, unlawful and a few other proscribed categories of speech. Twitter can tap into a long line of First Amendment jurisprudence limiting the scope of such speech regulations. Even with a private company’s greater flexibility, a First Amendment-based policy would establish much better protections for free speech.

In other words, Musk could show up at Twitter with precisely the standard long dismissed by censorship advocates — and then let that sink in. In my opinion, this takeover will make him the most powerful person on Earth as well. This is possible because nearly every influential personality & governments in the world are active with their respective handles. Whatever are the promises, history is the guiding light. As the saying goes, “power corrupts and absolute power corrupts absolutely”, the concentration of power vested in an individual earlier has proved to be a bane for the world. Having said that, Elon is a visionary leader who aspires to race ahead even with the future for the sake of humanity. Yet, who knows?

Acquiring such a powerful platform is no joke. The powerful governments can now become a puppet. But the dire need is to make users understand what actually free speech means. They should not be allowed to speak, write & propagandize whatever they want because no right is absolute. A clear limitation must be there. Also, privacy & transparency are now bigger concerns. Elon must strategise on this part in order to maintain trust regarding data of billions of users.

Abortion and the Hypocricy of Feminists

My experience with the “Influential ” RW , specially the women