EAM Jaishankar emphasized that BRICS must live up to its commitments to “sovereign equality, territorial integrity and international law”. His remarks were crucial since they occurred during a protracted border dispute between India and China in the eastern Ladakh region. And the invasion of Ukraine by Russia on the other hand.

Other than that EAM Jaishankar emphasised eight major issues during the meeting, including ” the need for “socioeconomic recovery from the Covid epidemic” and “creating robust and trustworthy supply chains.” 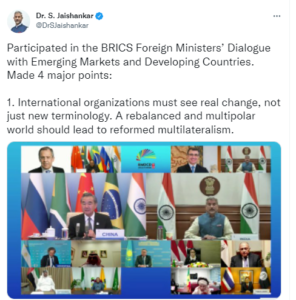 EAM in a series of tweets stated, “Today, I attended the BRICS Foreign Ministers’ Meeting. Eight major points were highlighted.”

“Not only must we pursue socioeconomic recovery from the Covid epidemic, but we must also build robust and trustworthy supply networks,” Jaishankar tweeted.

Jaishankar affirmed that the Ukraine conflict’s knock-on consequences have resulted in dramatic hikes in the costs of gasoline, food, and commodities. For the sake of the emerging world, this must be reduced.

BRICS has frequently reiterated respect for sovereign equality, territorial integrity, and international law, according to Jaishankar. “We must fulfil our obligations.”

He also stated that the BRICS countries should support UN Security Council reform unanimously and particularly. “We should work together to secure a credible commitment of resources from developed countries for climate action and climate justice.”

“Terrorism, especially cross-border terrorism, must be treated with zero tolerance by the BRICS,” he stated.

Trust and openness will be valued in a globalised and digitalized society. “Sustainable Development Goals must be handled holistically,” Jaishankar wrote on Twitter.

A conference of BRICS health ministers was also held last week, at which it was agreed that the BRICS countries will develop an early warning system for large epidemics.