Once former Pakistan minister Fawad Hussain had slammed junior foreign affairs minister Hina Rabbani Khar by calling her ‘low IQ’. In a tweet, he posted an old video of her speaking to Al Jazeera where she says that the Pakistan government, when she was the foreign minister, failed to address the issues related to terrorism emanating from Pakistan’s soil.

When you appoint a low IQ women whose only claim to fame is her Berkin bags and expensive eye shades such blunders ll become a norm, hope ll get rid of this lot sooner than later #ImportedGovernmentNamzanzoor pic.twitter.com/KCCkloO9kX

According to a 2017 report on genetic mutations in Pakistan, the “heterogenous composition” of Pakistan’s population, including high levels of “consanguinity” has led to a prevalence of genetic disorders. The report introduces a Pakistan “genetic mutation” database, which identifies and tracks different types of mutations and the disorders they lead to. According to the database, more than 1,000 mutations have been reported in 130 different kinds of genetic disorders found in Pakistan.

A BBC report discussed Pakistanis in Britain, 55% of whom marry a first cousin.[197] Given the high rate of such marriages, many children come from repeat generations of first-cousin marriages. The report states that these children are 13 times more likely than the general population to produce children with [recessive] genetic disorders, and one in ten children of first-cousin marriages in Birmingham either dies in infancy or develops a serious disability. The BBC also states that Pakistani-Britons, who account for some 3% of all births in the UK, produce “just under a third” of all British children with genetic illnesses. Published studies show that mean perinatal mortality in the Pakistani community of 15.7 per thousand significantly exceeds that in the indigenous population and all other ethnic groups in Britain. Congenital anomalies account for 41 percent of all British Pakistani infant deaths.[198]

In April 2002, the Journal of Genetic Counseling released a report which estimated the average risk of birth defects in a child born of first cousins at 1.7–2.8% over an average base risk for non-cousin couples of 3%, or about the same as that of any woman over age 40.[185]

So a cousin marriage by itself has a fairly small increase in harm, but it definitely compounds over repeated generations. As for the affect on IQ : Studies into the influence of inbreeding on anthropometric measurements at birth and in childhood have failed to reveal any major and consistent pattern, and only marginal declines were shown in the mean scores attained by consanguineous progeny in tests of intellectual capacity. In the latter case, it would appear that inbreeding mainly leads to greater variance in IQ levels, due in part to the expression of detrimental recessive genes in a small proportion of those tested. Basically it seems that inbreeding can not be said to consistantly lower IQ.

The range in depression for first cousin marriages seems to be on the order of 2.5 to 10 IQ points. In other words ~0.15 to ~0.65 standard deviation units of decline in intelligence. Muslims/middle easterners inbreed a lot and this has damaging effects on genetics and seemingly IQ.

I must make readers aware, I AM NOT an Islamophobe, nor do I promote hate-speech. I have friends of said faith in real life and I am an open-minded person to all idealogies (whether or not I believe them myself). I recently was made aware of the following statistics and facts (check sources), and I am interested to what reddit thought of this. “In accordance with the Quran and the tradition of Muhammad, half of all Muslims are inbred — marriage between first cousins is encouraged in many Islamic countries. One of the results is an average IQ 19(!) points lower than non-Muslims. This means that 2 points above standard deviation (top 2 percentile) have an IQ of only 117 as opposed to 130 (gifted) in non-Muslims, and means that gifted members of the Muslim population — which basically means anyone who can even achieve a degree in the sciences — make up less than 0.2% of the population. It also means that the percentage of Muslims that are mentally disabled (IQ<70) make up %400 percent more of the Muslim population than the non-Muslim one. The thing is, it’s not just a result of poverty either. The wealthier Muslim countries (Qatar, UAE, Saudi Arabia) actually scored the lowest.”

Ever since the dawn of mankind, marriage has ensured the establishment of families and reproduction. Marriage has different forms and rules in different religions and ethnicities [Muller & Young, 2001].

Eysenck believes that intelligence type C or measured intelligence has three elements: mental speed, persistence and the ability to recognize mistakes in solutions of a problem. The results of a study by Bashee (1977), as quoted by Woodley (2009), indicate that the extent to which consanguineous marriages affect IQ depends on the degree of kinship.

Morton’s study (1978) indicated that mental retardation in children of consanguineous marriages is five times more frequent than in normal marriages.

The study by Madhavan and Narayan (1991) demonstrated a considerable increase in mental retardation in children of consanguineous marriages. They predicted a higher risk in second-degree marriages (marriages between uncles and aunts on the one hand and nieces and nephews on the other) which are customary in Pakistan. 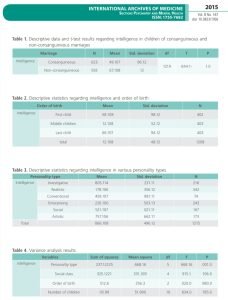 Table 1 demonstrates that there is no significant difference in intelligence between children of consanguineous and non-consanguineous marriages.

Table 2 demonstrates that the mean IQ has a decreasing trend from the first to the last child.

According to table 3, students with the investigative personality type show a better performance in intelligence tests.

Table 4 shows that there is a significant difference in intelligence only between mean square values of personality types and that the difference is not significant in other aspects.

Cousin marriages are more than often arranged marriages and these are very much prevalent in Pakistani society because of strong family traditions of marrying into the ‘baradari’ to strengthen family bonds, conserve family structure and keep property within the family, it also has financial advantages as no dowry is involved, a closer and comparatively more affectionate relationship between the bride and her in-laws. It also assures marital bliss and stability and due to this cousin marriages are preferred in Pakistan.

It is estimated that 700 children are born with genetic disabilities due to cousin marriages every year. Children born from first cousin marriages are at an elevated risk of miscarriage or infertility.

Pakistan with a population size of over 125 million has managed to rise above the charts and is said to be a goldmine of genetic disorders due to its unique geography and history; to mention a few are Down syndrome, Fragile X syndrome, Retinitis Pigmentosa, Gaucher disease, Congenital Cataract, Phenylketonurea, Deafness, Alopecias, Alzheimer’s, Albinism and Epilepsy.

In Pakistan, approximately 61.3 per cent of marriages are consanguineous while the ratio varies from 11 to 58 per cent in Muslim and neighbouring countries of Pakistan.

It was acquired in another study conducted by two Indian doctors (Neurology Asia, 2012) that children of parents having blood relations had significantly higher rate of epilepsy, spontaneous abortion, intrauterine loss and stillbirth. It is approximated that the rate of children with Down’s syndrome exceeds 1.2-1.7 per 1000. In first cousin marriages, infant mortality rate is over 1.2 per cent. In terms of birth defects, the risk elevates from about 2 per cent in general population to 4-6 per cent when parents are related.

According to Statistics in Pakistan (PWD), the estimated population with genetic disorders is 29.2 million. Analysis shows that prevalence of such disorders is highest in Sindh with 3.05 per cent while lowest in Punjab (Islamabad) with a rate of 1.0 per cent.

On the other hand according to another survey, rural areas are ahead of urban areas with a percentage of 65.7 per cent and 34.3 per cent, respectively. It is estimated that 1.6 per 1000 are impaired with bilateral hearing loss in Pakistan amongst which 70 per cent of hearing loss tend to appear in consanguineous families.

Majority of the population of Pakistan is not aware of the fact that consanguinity accompanies loss of fitness (biological) because of increase in genetic load specified to homozygosity. Therefore, it is acquired that consanguinity is one of the major cause of genetic disorders in Pakistan.

According to report, ethnicity, religion, geography and language generate genetically isolated groups in which well-known, multigenerational pedigrees with a number of cases of rare disease are witnessed as stated by Dr Masood Akhter Sheikh, chairman of Pakistan Medical Society.

Furthermore, susceptibility to infectious diseases i.e. hepatitis and tuberculosis is elevated in occasions of inbreeding. Consanguinity is also related to homozygosity and childhood mortality which results from invasive bacterial disease.

To investigate the relationships between consanguinity, fertility and rate of mortality, data on 9520 families resident in 11 cities in the province of Punjab, Pakistan, were obtained in studies conducted between 1979 and 1985.

Consequently, the burden and challenge of such genetic disorders in this population calls for the establishment of prevention programs. Strategies like genetic counseling; screening and prenatal diagnosis strategies require epidemiological surveys, which include information regarding the types and prevalence of various genetic disorders along with family history.

How Saudi Arabia Is Changing From Being A Haven For Muslims To A Tourist Destination?(Part-3)

Hindus- Through the Eyes of Americans