Mehbooba Mufti must be reminded that she is not good in giving challenges. Earlier she challenged the current dispensation to remove Article 370 and we all know what happened.

Now Mehbooba Mufti once again came up with a challenge. This time she is challenging the current dispensation to built Mandirs in the place where Taj Mahal and Red fort is located. She said “if they have guts, then show builts Mandirs in the place of Taj Mahal, Red Fort and then let’s see how many people will come here to see this country.” She further said “For distraction, people are being sent behind Muslims. It includes mosques, the Taj Mahal & others. Instead of getting back money from the people who escaped the country after looting it, they want to contort the properties built during Mughal era “. 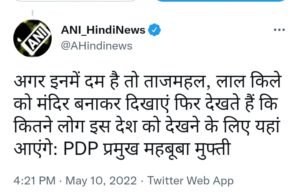 After the disputed structure of the Gyanvapi Mosque in Varanasi, there is also a demand for a survey of the Taj Mahal. Several organisations are of the view that the 20 closed rooms of the Taj Mahal should be opened, claiming that they contain idols of Hindu gods and goddesses. A petition has also been filed in the Lucknow Bench of the Allahabad High Court in this regard.