Indian Navy has finally got freedom from the traces of slavery. Prime Minister Narendra Modi has unveiled the new insignia of the Navy’s flag. The cross has been removed from the new Navy flag. Also the naval crest has been included in the flag again with- “Sham No Varun”, written on it. PM Modi said on the occasion that the Navy has removed a trace of slavery from its chest today. During this event, PM Modi has also handed over the reins of INS Vikrant to the Indian Navy.

Inspired by Chhatrapati Shivaji Maharaj, the flag will be hoisted in the Navy’s flag. 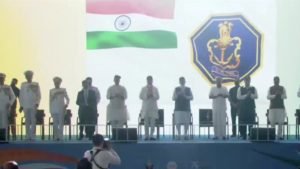 On this occasion, PM Modi said that – ‘India has removed a trace of slavery from its chest. The Indian Navy has got a new flag from today. Till now the flag of the Navy had the mark of slavery. From now on, a symbol inspired by Chhatrapati Shivaji Maharaj will fly in the Navy’s flag. Today I dedicate the new flag to the father of the Navy, Chhatrapati Shivaji Maharaj.’

Even after 75 years, many things still have the impression of the days of slavery.

PM Modi recently said from the ramparts of the Red Fort on 15 August that he is dreaming of an India free from colonial mindset. The same, the dream seems to be turning into reality. The new sign was unveiled by PM Modi in Kochi. It has been 75 years since India got independence, but even now the impression of the days of slavery is visible in many things. The Modi government is trying to erase this impression. This is the change in the flag.

After the independence of the country, the Indian Army continued to use the British colonial flag and badge. On 26 January 1950, only the pattern of the flag was Indianized. The Union Jack was replaced by the tricolor in the flag. George Cross was left outright. Now this has been changed. The new naval flag unveiled by the Prime Minister has replaced the St. George’s Cross with the national flag tricolor in the upper left corner of the flag. In its place the Naval Crest has been placed in the center on the right.

The old symbol used to represent the colonial past

The George Cross in the old flag of the Navy reflects the colonial past, inspired by the concept of the pre-independence flag of the Indian Navy. The old flag had a red George’s Cross on a white base with the United Kingdom’s Union Jack at the top left corner, which has now been replaced. Let us inform that after the independence of the country, the Indian Army continued to use the British colonial flag and badge. The flag pattern was Indianized only on 26 January 1950.

Rise of hardliners in Middle East -: Is this the sign of WWIII?

Pakistan gets uneasy and scared after Defense Minister Rajnath Singh’s statement on PoK!

by Kashmiri Fella
Join the Conversation