Poverty, unemployment, illness, responsibility of family, failure at every step and not knowing what, but one thing which was certain was that this unique devotee of Namagiri Devi, for whom mathematics has no meaning without realization of God, life I never shied away from my love and dedication towards mathematics. Remembering Ramanujan on this day, a true tribute can be paid to poor, helpless students like him only by taking a vow to bring him forward by becoming like Hardy.

Ramanujan was born in this house. In 2013, Prof. Susumui Sukurai found it.

Born on December 22, 1887, to Srinivasa Iyengar and Komalattammal, Srinivasa Ramanujan was serious and believed in God since childhood. His daily work was to go to the temple with his mother, to worship God. Ramanujan’s father was an accountant in a sari shop and mother used to sing hymns in a neighboring temple. The prasad of the temple would serve food at one time in the house. In a small two-room house, one room was given on rent to the students so that the house could run better.

Ramanujan’s genius by a child born in such a house when he was 13 years old in Loni’s trigonometry and 15 years old in GS Kar’s book ‘A Synopsis of Pure and Applied Mathematics’, about 6000 questions without any help Suffice it to tell. Poverty can be gauged from the fact that Ramanujan wrote only 3 registers in his entire lifetime, in which he used to do his work by writing first with a pencil and later with a green pen. In these three registers, he wrote close to 3500 theorems, due to the lack of a copy to write the results, he used to write them on the slate and erase them. 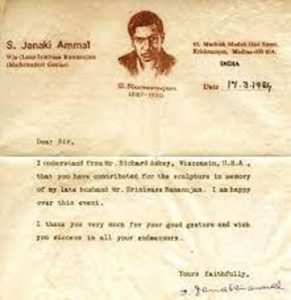 Letter written by Ramanujan’s wife Janaki to the mathematicians of the world to give a bronze statue.

Ramanujan continued to get scholarship till class ten, but due to failing twice in FA, he also kept losing. During his student life, Ramanujan wrote many research papers in the Journal of the Indian Mathematical Society, due to which his fame started spreading, but failure troubles the good and the same happened with Ramanujan. After failing in FA, he escaped from home, but returned home after seeing an advertisement published by his mother in the Hindu newspaper. Through a letter of recommendation from an English professor, he got a job as a clerk in the Madras Port Trust. 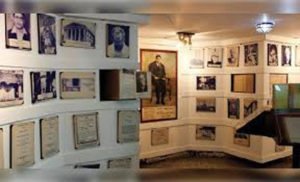 His favorite work was to solve mathematics diligently in his spare time at Madras Port and to get his papers published in the Journal of the Indian Mathematical Society. Then the time came in 1913, when he wrote a letter to GS Hardy, which contained 120 theorems; Seeing such a letter, Hardy was forced to wander into the world of imagination and started telling Littlewood – if this theorem is not correct, then people will lose faith in mathematics. Hardy, one of the great mathematicians of that time, called Ramanujan to England and together with him introduced him to be a true master by doing all the work to give mathematics a new height and to get Ramanujan the degree of FRS.

Ramanujan was often ill in England. One is the cold weather there, secondly Ramanujan’s self-cooked food (due to the First World War there was a shortage of vegetables in England) and bathing daily. When Hardy went to meet Ramanujan when he was ill, he posted a funny math result on the number plate of the taxi:

1729 = 12 ^3 + 1^3 = 10^3 + 9^3 is today called Ramanujan-Hardy number. Ramanujan attempted suicide while in England fed up with his illness and was caught by the police in an attempt to jump in front of the London Metro, where a lie told by Hardy that Ramanujan was FRS saved him from life imprisonment. took. He wrote more than 50 research papers with Hardy, but within a year of coming to India, after leaving his life, a kohinoor of mathematics was snatched from the country by going to the afterlife.

A country so united

The Geostrategic Importance of the Black Sea Region