The Chief Spokesperson of Peace Party ( note: the name of the party itself is an irony), calls himself shiv bhakt after his tweet insulting Bhagwan Shiv started circulating in the social media. Surprisingly he also went up to claim that he is making preparations to do Karseva at Kashi and will restore the place of Mahadev. According to his friends Arfa Khanum Sherwani and Raya Ayyub, Shadab Chauhan has always been devoted to Mahadev and can sing the whole Shiv Tandav Stotram in one go. 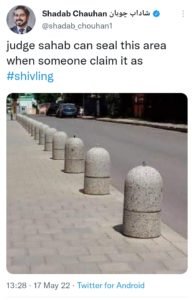 Note: This piece is a work of satire. The piece is as trustworthy as Kashmiri Muslims.

#Satire Liberals move to SC to declare all citizens of Netherlands, Taiwan, Australia and others as Aliens .